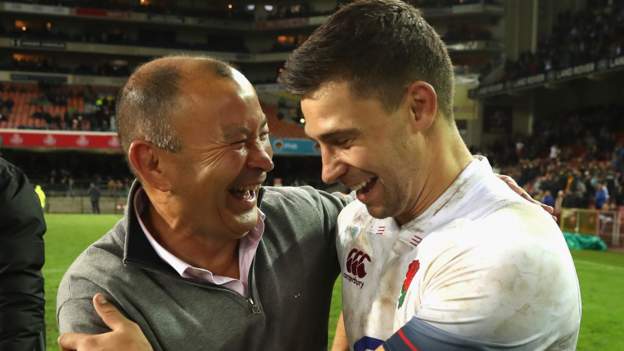 England scrum-half Ben Youngs says in his 100-cap international career no other coach “has ever come near” the rugby intelligence of Eddie Jones.

Youngs, 31, reached a century against Italy in October and says he plans to continue until the 2023 World Cup.

Jones became England boss in 2015 and has since led the side to a World Cup final and three Six Nations titles.

“I have never worked with anyone who knows the game as well as Eddie,” Youngs said on Rugby Union Weekly.

Speaking to fellow England nine Danny Care on the BBC Radio 5 Live podcast, Youngs continues: “No one has ever come near.

“If he watched a game now, he could come up with a gameplan and exploit both teams’ weaknesses within 10 minutes. It is incredible.”

Youngs has now become a favourite of Jones after playing under him for five years and is likely to earn his 101st cap against Georgia in Saturday’s Autumn Nations Cup match.

The scrum-half added that he admires Jones’ direct leadership style, something which led to an unorthodox first meeting between the pair.

“He told me I needed to lose some weight because I wasn’t fit enough and he needed me to be sharper,” Youngs recalls.

Youngs was stuck on 99 caps for seven months after the coronavirus pandemic halted the Six Nations but now begins the work of closing in on Jason Leonard’s record of 114 caps.

Making his debut against Scotland in 2010, the Leicester back has earned two British and Irish Lions caps as well as being his country’s first choice scrum-half for most of the last decade.

But Youngs says he sees this milestone as a “reset” as he sets his sights on the 2023 World Cup in France.

“A lot can happen between now and then but that is my goal. I will do everything I can and see where it takes me.”

Care asked Youngs to pick his top five moments in an England shirt, here is what he went for:

Can you name the players with the most England caps?