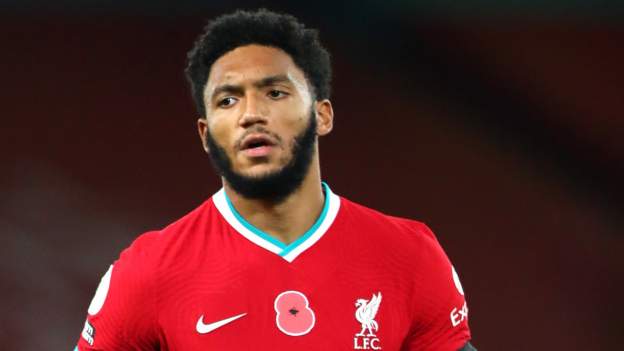 Liverpool centre-back Joe Gomez is to have further tests on a knee injury which England boss Gareth Southgate is “hoping and praying” will not mean a long-term absence.

Gomez, 23, was injured while training with England for Thursday’s friendly against the Republic of Ireland.

“I can’t tell you how serious it is as he’s yet to have scans,” said Southgate on Wednesday.

“What was upsetting was to see he was in a fair bit of pain.”

Gomez has returned to Liverpool for what the Premier League club said was “further diagnosis” with their medical team.

“There was nobody around him when the injury happened. I didn’t like that element of it,” added Southgate.

“We’re hopeful for him that it’s not what it might be, but it’s not a good situation.

“My immediate thoughts are with him because he’s had some difficulties with injury in the past.

“We’re hoping and praying that it’s not going to be a long-term one, but we just have to see.”

Van Dijk has had surgery on a knee ligament injury picked up against Everton in a 2-2 draw on 17 October.

The Premier League champions have also been without Fabinho, who had been deputising in defence for Van Dijk, because of a hamstring injury.

Additionally, Liverpool have an injury concern over right-back Trent Alexander-Arnold, who was taken off during a 1-1 draw at Manchester City on Sunday and withdrawn from England duty.

Gomez’s injury while on England duty means Liverpool manager Jurgen Klopp now faces a serious defensive crisis – and it will only increase his growing frustration at the packed fixture schedule.

Joel Matip played alongside Gomez at Etihad Stadium but he was only just back from injury and has a chequered fitness record. Gomez was effectively Klopp’s linchpin in that position, with 19-year-old Rhys Williams and Nat Phillips, 23, also stepping in since Van Dijk and Fabinho were sidelined.

The news that Gomez could now be facing a spell on the sidelines leaves Klopp with a serious problem as the fixtures continue to come thick and fast, surely meaning he will enter the transfer market for a central defender when the window opens in January.

It is also a personal blow for Gomez, who has suffered serious injuries in the past, one of which saw him restricted to only a last-minute appearance as a substitute in Champions League final victory against Tottenham in Madrid in 2019.