Thinking About a Holiday Gathering? Look at This Troubling Map First 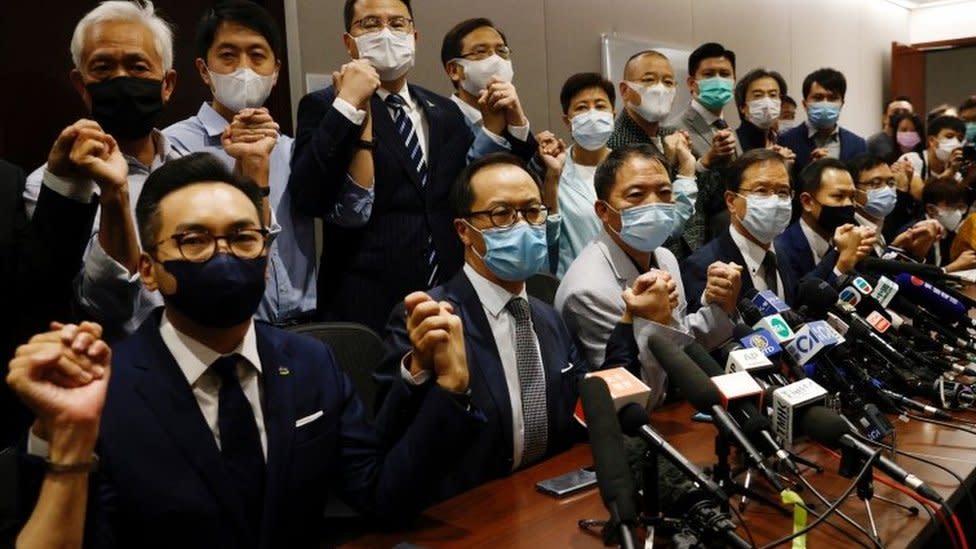 All of Hong Kong’s pro-democracy lawmakers have resigned after four of their colleagues were disqualified.

On Wednesday Beijing passed a resolution allowing the city’s government to disqualify politicians deemed a threat to national security.

Shortly afterwards the opposition lawmakers said they would leave the city legislature in solidarity.

For the first time since Hong Kong was handed back to China in 1997 the body has almost no dissenting voices.

BBC China correspondent Stephen McDonnell says the legislature was already stacked in favour of the pro-Beijing-camp.

Hong Kong Democratic Party chairman Wu Chi-wai told reporters: “We can no longer tell the world that we still have ‘one country, two systems’, this declares its official death.”

Hong Kong – formerly a British colony – was returned to China under the “one country, two systems” principle, which allowed it to retain more rights and freedoms than the mainland until 2047.

The dismissal of the four legislators is being seen as the latest attempt by China to restrict Hong Kong’s freedoms, something Beijing denies.

The law was introduced after years of pro-democracy and anti-Beijing protests. It has already led to several arrests of activists and has largely silenced protesters.

The territory’s leader, Chief Executive Carrie Lam, is pro-Beijing and is supported by the central government there.

What happened on Wednesday?

The new resolution passed by China’s National People’s Congress Standing Committee says that lawmakers should be disqualified if they support Hong Kong independence, refuse to acknowledge China’s sovereignty, ask foreign forces to interfere in the city’s affairs or in other ways threaten national security.

It also allows the Hong Kong government to directly remove lawmakers without having to approach the courts.

Moments after that resolution passed, four lawmakers – Alvin Yeung, Kwok Ka-ki and Dennis Kwok of the Civic Party and Kenneth Leung of the Professionals Guild – were disqualified.

All four of them are considered moderates and they have never supported Hong Kong independence.

The city’s pro-democracy legislators have 19 seats in the 70-seat legislature. Within hours of their disqualification, the remaining 15 announced they would resign en masse.

“We… will stand with our colleagues who are disqualified. We will resign en masse,” the Democratic Party’s Wu Chi-wai said. Their letter of resignation will be submitted on Thursday.

But Chinese foreign ministry spokesman Wang Wenbin said the disqualification of the four lawmakers was “rational, reasonable and in line with the constitution and laws”.

“This was a necessary requirement for adhering to and improving on One Country, Two Systems, implementing Hong Kong’s Basic Law, as well as Hong Kong’s National Security Law,” he said at a news conference in Beijing.

The four men were among 12 legislators who were earlier barred from standing in a legislative election planned this year but delayed until 2021.

The group had called on US officials to impose sanctions on those responsible for alleged human rights abuses in Hong Kong.

The Chinese government and its surrogates in Carrie Lam’s administration have – in recent times – used specific problems as a series of excuses to introduce wholesale, draconian changes which will remain in place long after whatever hurdle it is has been cleared.

In this case, four legislators had, controversially, been ruled ineligible for the next Legislative Council election.

However, because the term of the current legislature had been extended for a year, due to a delayed vote, they had been able to remain in their existing positions.

Carrie Lam wanted them gone straight away so she says she asked Beijing to introduce a new law enabling their immediate dismissal. In reality, who knows whether Hong Kong’s leader requested this move or was told it was going to happen by the Communist Party’s senior leadership?

Either way, now the city government has been empowered to remove any pro-democracy politician who is seen to have acted with insufficient loyalty to the motherland in the future.

Crucially, the courts can be bypassed under the new rules and, now that the Hong Kong government has said that the concept of the separation of powers has never actually applied in the city, the executive branch is able to dismiss members of the legislature and their view is that this is not really anything to worry about.

What reasons are being given for the lawmakers’ removal?

Speaking to the media, Carrie Lam said the four council members who were disqualified had already been found to not fulfil the requirements to stand in the now-postponed elections next year.

She added that although she “welcomes diverse opinions in the Legislative Council” these had to be expressed “in a responsible manner”.

All members would have to be in line with the territory’s mini constitution, the Basic Law, and other local legislation including the new national security law, she said.

She also dismissed concerns that a mass resignation of the remaining pro-democracy lawmakers would turn the Legislative Council into a “rubberstamp” body.

What is the background?

Hong Kong was a British colony until 1997 when it was returned to Chinese control.

As a Special Administrative Region, Hong Kong was to have its own legal system, multiple political parties, and rights including freedom of assembly and free speech.

In response to the security law – passed in response to months of pro-democracy protests – the UK has offered a route to British citizenship to residents still holding a British National Overseas (BNO) passport.

Around 300,000 people currently hold BNO passports, while an estimated 2.9 million people born before the handover are eligible for it.