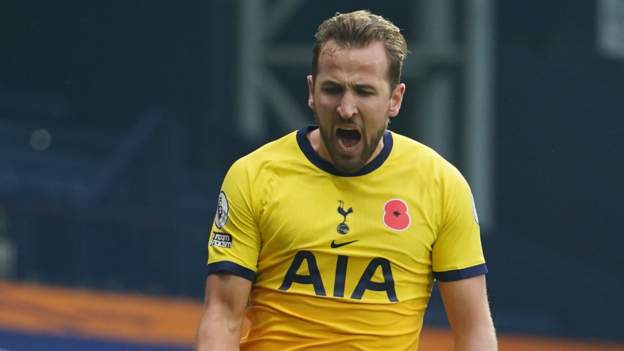 Harry Kane’s 150th Premier League goal was enough to send Tottenham top of the table for the first time since August 2014.

A game of few chances seemed destined to end goalless after Hugo Lloris had kept out Karlan Grant’s second-half header and a flurry of Tottenham chances had come and gone without reward.

But, as has been the case so often in the past, Kane punished a minor lack of concentration to head home an 88th-minute winner.

West Brom’s defence failed to track the England skipper’s run into the box, allowing him to leap unchecked to meet Matt Doherty’s cross and guide the ball over goalkeeper Sam Johnstone.

Tottenham’s lead at the summit may only last a matter of hours but it was the kind of narrow win that is the hallmark of champions.

For West Brom, who have now scored once in their last five games, it was a result that keeps them in the relegation zone and already facing a tough battle to retain their top-flight status.

It is too early for Spurs fans to get carried away, but when you look at some of the players who did not even make Jose Mourinho’s matchday squad – Harry Winks, Davinson Sanchez and Steven Bergwijn – there is no reason why they should not be competing for the biggest prize.

Apart from the start of his final season at Manchester United, when they played a day before everyone else, this was the first time Mourinho has been top of the table since September 2017.

He has infused grit and organisation into an already top side – not to mention added Gareth Bale.

The Welshman was not at his best on this occasion but, starting a Premier League game for the first time since 2013, he formed a potentially lethal attacking trio alongside Kane and Son Heung-min that will not be easily subdued.

Son could have made life a lot easier for Tottenham if he had taken an early chance that came his way, but the South Korean took far too long to set himself when in space at the far post and Kyle Bartley blocked the shot.

After that, it was a succession of long-range shots, none of which threatened Johnstone’s goal.

And when Doherty had an effort saved near the end, it seemed Spurs would have to settle for a point.

But Kane had other ideas to send Tottenham into the international break in a very healthy position, with Manchester City and Chelsea their next two opponents.

Life is hard at West Brom

It has not been an easy few days for West Brom. Defeat at Fulham on Monday brought criticism from Bilic and the absence of veteran defender Branislav Ivanovic was not helpful.

Ivanovic and Matheus Pereira both tested positive for coronavirus in the week, meaning more shuffling of a West Brom squad that has looked short of the class required to drag themselves out of trouble near the foot of the table.

Bilic could not be accused of lacking desire. Quite vocal to start with, by the time the first half was over he had edged on to the pitch as he tried to give instructions, sometimes barely feet from the players.

West Brom do have some decent players – including 20-year-old midfielder Conor Gallagher, who is on loan from Chelsea – but they rarely look as though they can score.

Grant flicked a Darnell Furlong cross out for a throw-in at one point, despite being offered a free header six yards out, while the former Huddersfield forward might also have converted had Eric Dier not got his head to a Callum Robinson cross as it was dropping almost on the goalline.

As the Baggies know only too well, the Premier League is a harsh environment – and unless they start scoring, they face a hard task avoiding an immediate return to the Championship.

West Brom’s next game is a trip to Old Trafford to face Manchester United on Saturday, 21 November (15:00 GMT). On the same day, Tottenham entertain Manchester City (17:30).