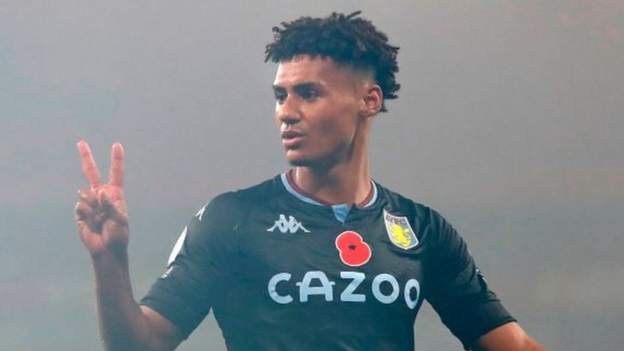 Ollie Watkins said it was “unbelievable” to score against the team he supports as his double helped Aston Villa claim an impressive victory at Arsenal to move up to sixth in the Premier League.

The visitors took the lead midway through the first half when Bukayo Saka turned Matt Targett’s cross into his own net.

Watkins, who scored a hat-trick in a 7-2 win against champions Liverpool earlier this season, made it 2-0 with a header towards the end of the second half and scored his second soon after, slotting the ball under Bernd Leno after a quick break.

“As an Arsenal fan to score here at the Emirates is unbelievable,” Watkins told BBC Radio 5 live.

The 24-year-old, who has now scored six goals this season, added: “I think I have another level.

“In the second half you saw what I’m about, getting the ball, setting and spinning and making defenders run towards their own goal – hopefully the more I can do that the more goals I can score.”

The Gunners had gone into this game looking to build on their impressive 1-0 win against Manchester United last time out, but despite dominating possession they created very little, with Alexandre Lacazette going closest when he headed over Kieran Tierney’s cross.

Instead, it was Villa who always looked the most likely to score and they could have won by an even bigger margin.

The visitors had a goal ruled out inside the first minute when John McGinn thumped home Jack Grealish’s cross.

However, after a lengthy check by the video assistant referee, it was ruled out as Ross Barkley, who was in an offside position, was adjudged to have been in goalkeeper Leno’s way.

Egypt midfielder Trezeguet forced a good save from Leno early in the second half before the Arsenal keeper denied Grealish at the near post with a strong hand, while the Aston Villa captain also had an effort cleared off the line.

Defeat leaves an inconsistent Arsenal 11th in the table while the win maintained Villa’s 100% away record so far this season.

Villa back to their best after mini-slump

Villa made a superb start to this season with a run of four successive wins that included eye-catching victories against Liverpool and Leicester.

Back-to-back defeats against Leeds and Southampton – games in which they conceded a total of seven goals – raised concerns that their excellent start may have been a false dawn, but this performance will have significantly eased some of those fears.

Boss Dean Smith said before kick-off that he believed the team he had put out possessed the attacking quality to hurt Arsenal and so it proved, particularly in the second half when they looked capable of scoring with every break.

Villa have now won five of their seven games so far this season and having taken some significant scalps already, there is every reason for their fans to be optimistic.

“Coming here is tough, we knew we had to be at our best without the ball,” said Smith.

“What pleased me the most was we could’ve scored more. We created some great chances from our ball carrying skills with Jack Grealish and Ross Barkley and Trezequet and Ollie Watkins’ non-stop running.”

This defeat will prove particularly concerning for Arsenal boss Mikel Arteta, who appeared to have rectified issues with a defence that conceded goals far too easily last season.

Going into the match they boasted the Premier League’s best defence, having conceded just seven goals in seven games, and it was the Gunners’ struggles at the other end of the pitch that Arteta would have been hoping to see an improvement in.

But once again the hosts lacked creativity and managed just two shots on target all game, neither of which posed any real danger to their former goalkeeper Emiliano Martinez.

As pleasing as the performance in the 1-0 win against Manchester United was, this result underlined Arsenal’s attacking problems when the defence has an off day.

Villa part of an elite club – the stats