Will Trump give a concession speech or congratulate Biden? If not, he’ll break more than a century of tradition

How to Organize Everything You Want to Watch With Google TV 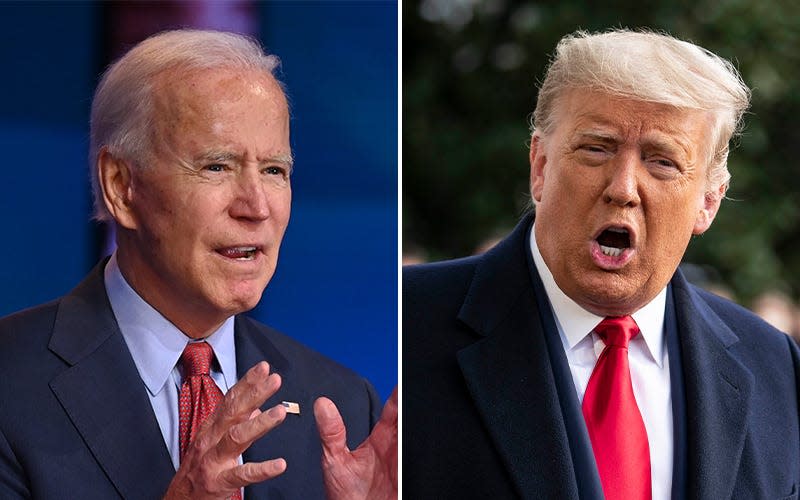 WASHINGTON – If an election is like a war between opposing armies, then the presidential concession speech is the peace treaty.

Right now, President Donald Trump is still firing away, and he shows no sign of leaving the battlefield – let alone offering an olive branch to his rival Joe Biden, who appeared Thursday to be on the verge of clinching the 270 Electoral College votes needed to prevail in the presidential election.

Trump is not known for admitting fault or failure. And he is more prone to stoking divisions than healing them, as his Twitter feed in recent days has demonstrated.

“STOP THE COUNT!” he posted on Twitter, as Biden inched closer to the 270 electoral votes needed to win the White House.

As Biden inched closer to a win, Trump took the podium to make a series of baseless claims about election fraud and to accuse Democrats of trying to “steal” the election, while offering no evidence of illegal activity.

Some believe that Trump will come around and make a concession speech – if only to preserve his own political standing.

Trump would hardly be the first losing candidate to question the election results, said Scott Farris, the author of “Almost President: The Men Who Lost the Race but Changed the Nation.”

“Richard Nixon, for example, was sure he’d been cheated in 1960 against John Kennedy because of shenanigans in Texas and Illinois,” Farris said. “But … he realized that if he didn’t come across as a good loser, his future in politics was probably over.”

Trump will come to a similar conclusion, Farris added. He may also realize that if he is a sore loser, it will reflect badly on his children who seem to have their own political ambitions, he added.

“As he looks ahead, I think it’ll come to him that ‘I need to say something and be fairly a good sport about this’,” Farris said.

If Trump refuses to deliver a public concession speech or make a congratulatory call to Biden, it would break with 124 years of American history. Experts say it would also undermine the election results and exacerbate the nation’s political tensions, already laid bare by a bitter campaign and the extended, contested vote count.

“It will be truly harmful,” said William Howell, chair of the political science department at the University of Chicago.

“Concession speeches are a kind of affirmation about the legitimacy of elections,” he said. They’re about losing candidates recognizing the outcome and calling on their followers to do the same, “which is essential for the health of our democracy,” he said.

Since 1896, every losing presidential candidate in American history has delivered a concession message, whether by telegram to the victor or via a nationally televised address to the nation.

Some have been humble and gracious, others not so much.

“A few have been petulant,” Farris said, mentioning Barry Goldwater’s 1964 concession to Lyndon Johnson and George McGovern’s 1972 concession to Richard Nixon. “Both were kind of not necessarily the most gracious of losers,” he said, adding that they had personal animosity toward the men who defeated them.

Among the most memorable: Sen. John McCain’s concession to Barack Obama in 2008.

“The American people have spoken, and they have spoken clearly. A little while ago, I had the honor of calling Sen. Barack Obama,” McCain began in remarks outside his election night headquarters in Phoenix. The crowd interrupted his speech with a loud chorus of boos, but McCain held up his hands to quiet them.

“Please,” he said, before continuing to say that he’d congratulated Obama for “being elected the next president of the country that we both love.” McCain noted the historic significance of Obama’s election as the country’s first Black president, and he promised to do “all in my power to help him lead us through the many challenges we face.”

“I wish Godspeed to the man who was my former opponent and will be my president,” the late Arizona senator said.

“What’s crucial is grace and a recognition of facts,” he said. Candidates almost always make a reference to the well-fought campaign battle, then give a nod to the winner’s legitimacy, Howell said.

The last incumbent president to lose a re-election bid was George H. W. Bush. Like others, he used his concession speech to urge Americans to move past the election and unite behind his opponent Bill Clinton.

“We respect the majesty of the democratic system,” Bush said. “… America must always come first, so we will get behind this new president and wish him well.”

In the traditional private note he left for Clinton, Bush was even more personal and direct: “Your success now is our country’s success. I am rooting hard for you.”

In her 2016 concession speech, Hillary Clinton talked about how painful the election loss was but she similarly urged her supporters to give Trump a chance.

“I know how disappointed you feel because I feel it too,” Clinton said. But, she continued, “Donald Trump is going to be our president. We owe him an open mind and the chance to lead.

“Our constitutional democracy enshrines the peaceful transfer of power and we don’t just respect that, we cherish it,” she added.

In the hotly contested 2000 election, former Vice President Al Gore famously called George W. Bush to concede the day after the election, but then quickly called back to retract it as the vote count in the all-important state of Florida see-sawed between the two men.

Gore and Bush then each dug in for a 36-day political stalemate that ended when a U.S. Supreme Court decision halted a recount in Florida with Bush ahead by 537 votes. That made Bush the winner.

“Just moments ago I spoke with George W. Bush and congratulated him on becoming the 43rd president of the United States. And I promised him that I wouldn’t call him back this time,” Gore said on Dec. 13 in his concession speech.

“Let there be no doubt, while I strongly disagree with the court’s decision, I accept it,” Gore said of the high court’s 5-4 ruling. ” … And tonight, for the sake of our unity as a people and the strength of our democracy, I offer my concession.”

Howell said he didn’t want to speculate about whether Trump will eventually give a concession speech.

“But I think what we can say is that none of the early gestures that have come from him in the last few days suggest grace, admission, or fidelity to the facts,” he said.

Farris agreed it would a horrible blow to democracy if Trump refuses to concede and publicly recognize Biden’s win. But if Trump is reluctant, it’s no wonder, said Ferris, who had to deliver his own concession speech after losing a congressional race in Wyoming in 1998.

“America doesn’t like losers,” Farris said. And “one of the problems that we have with losing presidential candidates is that we treat them as pariahs … so they’ve struggled to find their place in American history.”

But a concession speech might appeal to Trump’s transactional instincts, in that it could buy him some goodwill, he argued.

“I expect it to be one of the less gracious concession speeches we’ve ever heard,” Farris said. “I certainly don’t expect him to say, ‘Well, that’s the way the breaks go … It was a fair fight and c’est la vie’.”

More: ‘Everybody in Washington is pretty shocked’: Democrats, GOP grapple with mixed emotions over election

This article originally appeared on USA TODAY: Will Trump give a concession speech or congratulate Biden on his win?