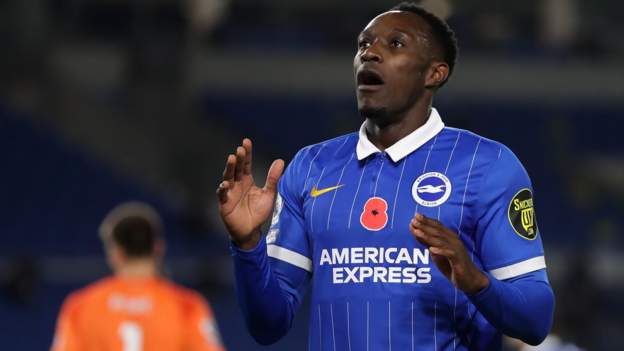 Brighton and Burnley played out a goalless draw which will do little to quell either side’s worrying Premier League form.

The Clarets, having their worst ever start to a top-flight season, are on two points from seven games, while the Seagulls have not won in six league games.

Brighton dominated as they often do but could not beat Nick Pope in Burnley’s goal. Pope did well to deny Danny Welbeck on his first start for Brighton.

This was a game that will have not been watched by many – behind closed doors and on pay-per-view – and that is probably for the best.

This was always going to be a game of contrasting approaches – Graham Potter’s ball-playing Brighton against Sean Dyche’s pragmatic Burnley, and so it proved.

This is Burnley’s joint-worst start to a league season, along with 1977-78 when they were in the second tier. The last time they failed to win their opening seven games, back in 2014-15, they were relegated.

The big positive was the return of captain Ben Mee for his first appearance of the season following a thigh injury.

But there was little to cheer on the pitch, with Chris Wood heading the ball at Ryan in their only shot on target and Robbie Brady putting a bicycle kick wide.

You always know what you will get with Brighton – they passed 100 Premier League shots for the season in this game. Only Liverpool have had more. They rank sixth in the league for possession too.

But they nearly always fail to take their chances.

Tariq Lamptey had an opportunity to put them ahead after 60 seconds but fired over from Welbeck’s lay-off.

Welbeck was sent into the box by Neal Maupay – back after being left out last weekend for disciplinary reasons – but his shot was saved by Pope.

They ended with 19 shots, but nine of them were blocked. Adam Webster headed over and Maupay hit the target, but it felt as if both teams could be there all day and not score.

It is the international break now – with both sides back in action on Saturday, 21 November at 15:00 GMT. Burnley host Crystal Palace and Brighton visit Aston Villa.