US election: Scattered ‘count every vote’ protests, but no widespread unrest seen as Americans nervously wait

The good, the great and the homegrown: What has TVNZ got in store for 2021? 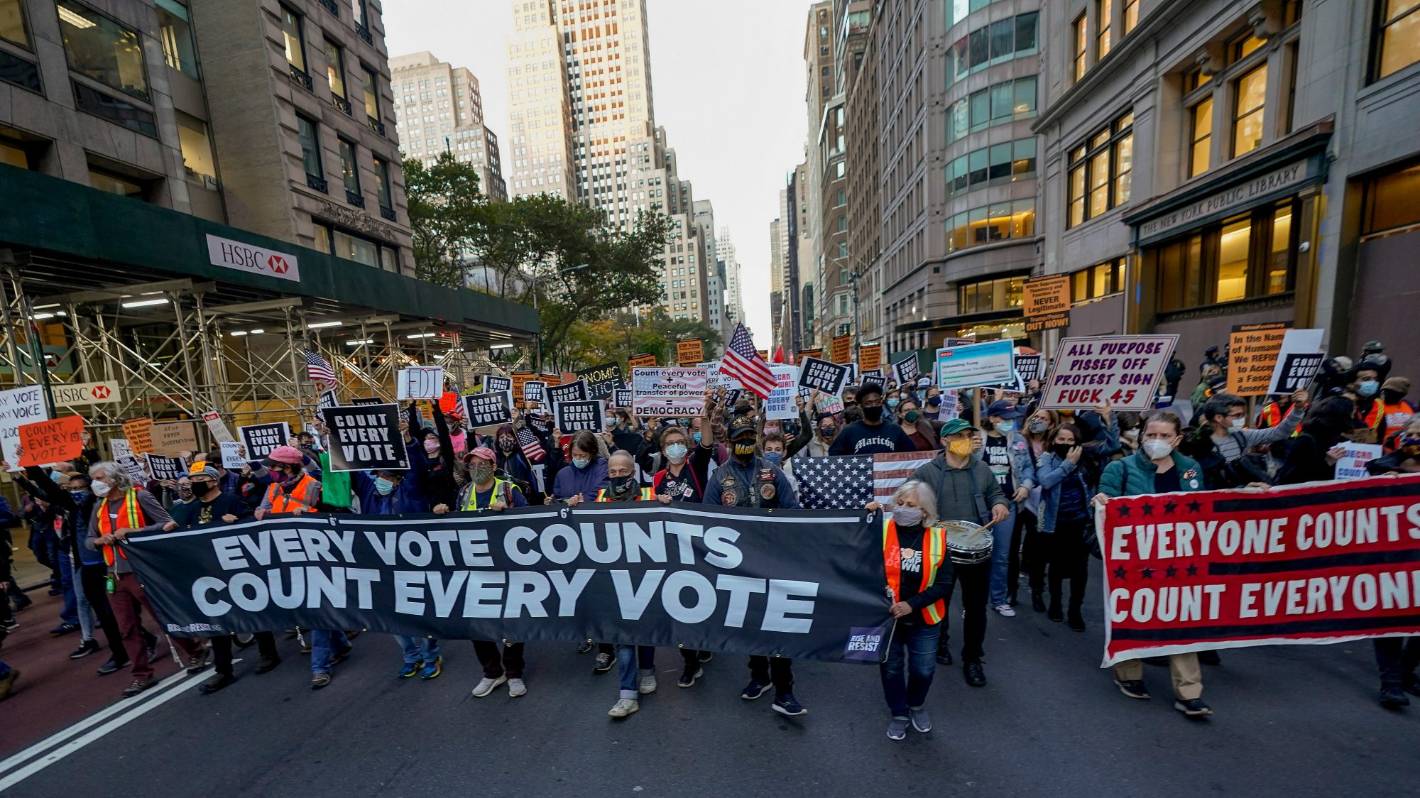 Scattered protests took place from Washington DC to Washington state as votes were counted, but there were no signs of widespread unrest or violence linked to the US election.

The outcome of the hard-fought contest for the US presidency remained undecided Thursday morning (NZT), stirring worries that prolonged uncertainty could yet spark conflict.

READ MORE:
* US election: Joe Biden’s Wisconsin, Michigan wins brings him closer to Presidency victory
* History tells us that a contested election won’t destroy American democracy
* US Election: What happens in the unlikely event of a tie?

Groups of teenagers danced in the street as onlookers cheered. Large banners, including one reading “Trump lies all the time,” were unfurled.

At one point, the marchers stabbed the tyres of a parked police van to flatten them.

In Philadelphia, about 200 protesters representing unions, groups working to combat climate change and other causes, rallied near Independence Hall Wednesday afternoon (local time), saying they had come to protect democracy.

The protest came shortly before Trump campaign officials said they would file suit to stop the counting of votes in Pennsylvania over what they contended was a lack of transparency.

“We want Biden to win, but we want every vote to be counted no matter what,” said one of the protesters, Corean Holloway, 69, of Philadelphia.

A chaotic confrontation with protesters unfolded Thursday outside the TCF Center, where city police officers barred Republican and Democratic poll challengers from entering the room where Detroit ballots are being counted inside the convention centre.

Both political parties hit the law-mandated maximum of 134 challengers, and when election workers told GOP challengers the party had hit its limit, some began shouting about the unfair process and lack of transparency. An unidentified election worker shouted back the group was at its limit.

City police officers then locked the doors following the altercation, limiting those who could enter. Challengers, carrying “Count Every Vote” and “voters decide” signs, then proceeded to knock on the windows and doors looking into the rooms where ballots were being counted, and election workers briefly attempted to cover the glass with cardboard and poster board.

“They’re escorting us out like bouncers for a nightclub,” said Republican challenger Nick Sinishtaj of Addison Township. “When you walk in, they ask what party you’re affiliated with and as soon as you say GOP, they say, ‘Both are at capacity.’ Well, if that was the case, why did you ask what my party was in the first place?”

The chaos unfolded as Trump’s re-election campaign filed suit in Michigan’s Court of Claims seeking to halt ballot counting in the state “until meaningful access has been granted” to observe the ballot counting process. Meanwhile, a review was underway of unofficial results in a small county in Northern Michigan.

After the news broke of Trump’s lawsuit, inside the room where ballots were being counted, a group of unidentified people briefly started chanting, “Stop the votes!”

Elections workers at one point cheered as a challenger was escorted from the room for not wearing a mask, said William Hartmann, a Republican member of the Wayne County Board of Canvassers who was observing the counting.

Hundreds of businesses in cities across the US boarded up their doors and windows ahead of the election, fearing the vote could lead to the sort of violence that broke out after Floyd’s death.

“Some people would like to cause mayhem and trouble,” Washington Mayor Muriel Bowser said earlier in the day. She said she had never seen so many businesses being boarded up: “That all saddens me.”