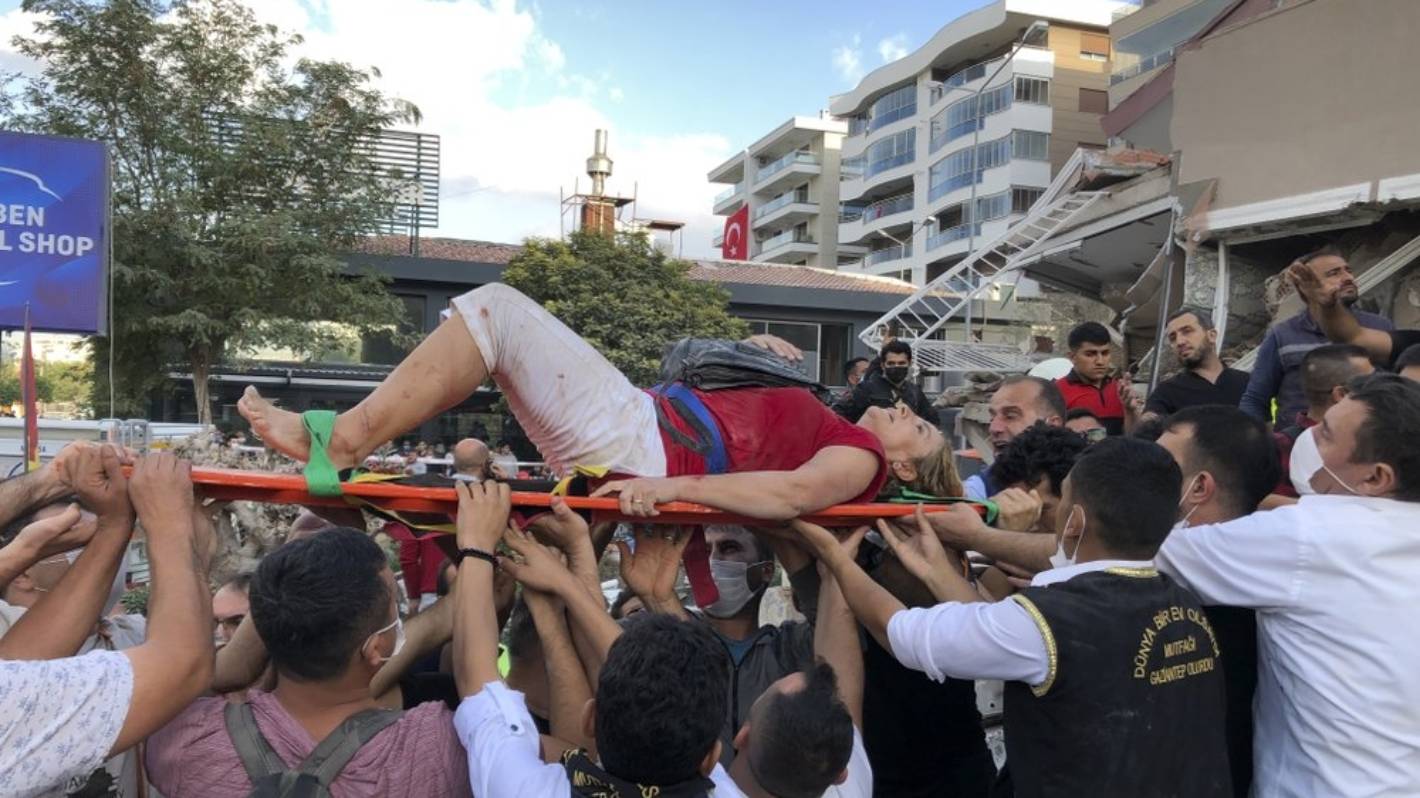 A strong earthquake has struck in the Aegean Sea off the Turkish coast, killing at least 14 people and injuring hundreds amid collapsed buildings and flooding, officials say.

A small tsunami struck the Seferihisar district south of Izmir after the Friday (local time) quake, the city in western Turkey that was the worst affected, said Haluk Ozener, director of the Istanbul-based Kandilli Observatory and Earthquake Research Institute.

At least 12 people were killed in Izmir, Turkey’s third-largest city, including one who drowned, and 419 were injured, according to Turkey’s Disaster and Emergency Management Presidency, or AFAD.

On Samos, Greece, where a tsunami warning was issued, two teenagers died after being struck by a wall that collapsed. Greek Prime Minister Kyriakos Mitsotakis tweeted condolences, saying “Words are too poor to describe what one feels before the loss of children.” Another eight people were reportedly treated at the local hospital for light injuries.

Izmir Governor Yavuz Selim Kosger said at least 70 people were rescued from wrecked buildings, with four destroyed and more than 10 collapsed. Others suffered less severe damage, he said, but did not give an exact number.

The earthquake, which the Kandilli institute said had a magnitude of 6.9, struck at 2:51 p.m. local time in Turkey and was centered in the Aegean northeast of Samos at a depth of 16.5km.

It was felt across the eastern Greek islands and as far as the Greek capital, Athens, and in Bulgaria. In Turkey, it was also felt across the regions of Aegean and Marmara, including Istanbul. Istanbul’s governor said there were no reports of damage in the city, Turkey’s largest.

Videos on Twitter showed flooding in the Seferihisar district, and Turkish officials and broadcasters called on people to stay off the streets after reports of traffic congestion.

Health Minister Fahrettin Koca tweeted that 38 ambulances, two ambulance helicopters and 35 medical rescue teams were working in the city of Izmir. AFAD and Turkish Red Crescent were in Izmir, while Istanbul and other cities sent in rescue teams.

Greek seismologist Akis Tselentis told Greek state broadcaster ERT that due to the shallow depth of its epicenter – roughly 10km – potentially powerful aftershocks could be expected for several weeks.

He said residents of affected areas must be careful not to enter buildings that might have been damaged in the initial quake, as they could collapse in a strong aftershock.

The Greek minister responsible for civil protection and crisis management, Nikos Hardalias, headed to Samos, as were a search and rescue team, paramedics and engineers.

In a show of solidarity rare in recent months of tense bilateral relations, Greek and Turkish government officials issued mutual messages of solidarity.

“We pray that there is no further loss of live in Turkey or Greece and we send our best wishes to all those affected on both sides of the earthquake,” Turkey’s Communications Director Fahrettin Altun tweeted. “This tragedy reminds us once again how close we are despite our differences over policy. We’re ready to help if Greece needs it.”

Mitsotakis, the Greek prime minister, tweeted that he had phoned Turkish President Recep Tayyip Erdogan “to offer my condolences for the tragic loss of life from the earthquake that struck both our countries. Whatever our differences, these are times when our people need to stand together.”

Relations between Turkey and Greece have been particularly tense, with warships from both facing off in the eastern Mediterranean in a dispute over maritime boundaries and energy exploration rights. The ongoing tension has led to fears of open conflict between the two neighbours and NATO allies.