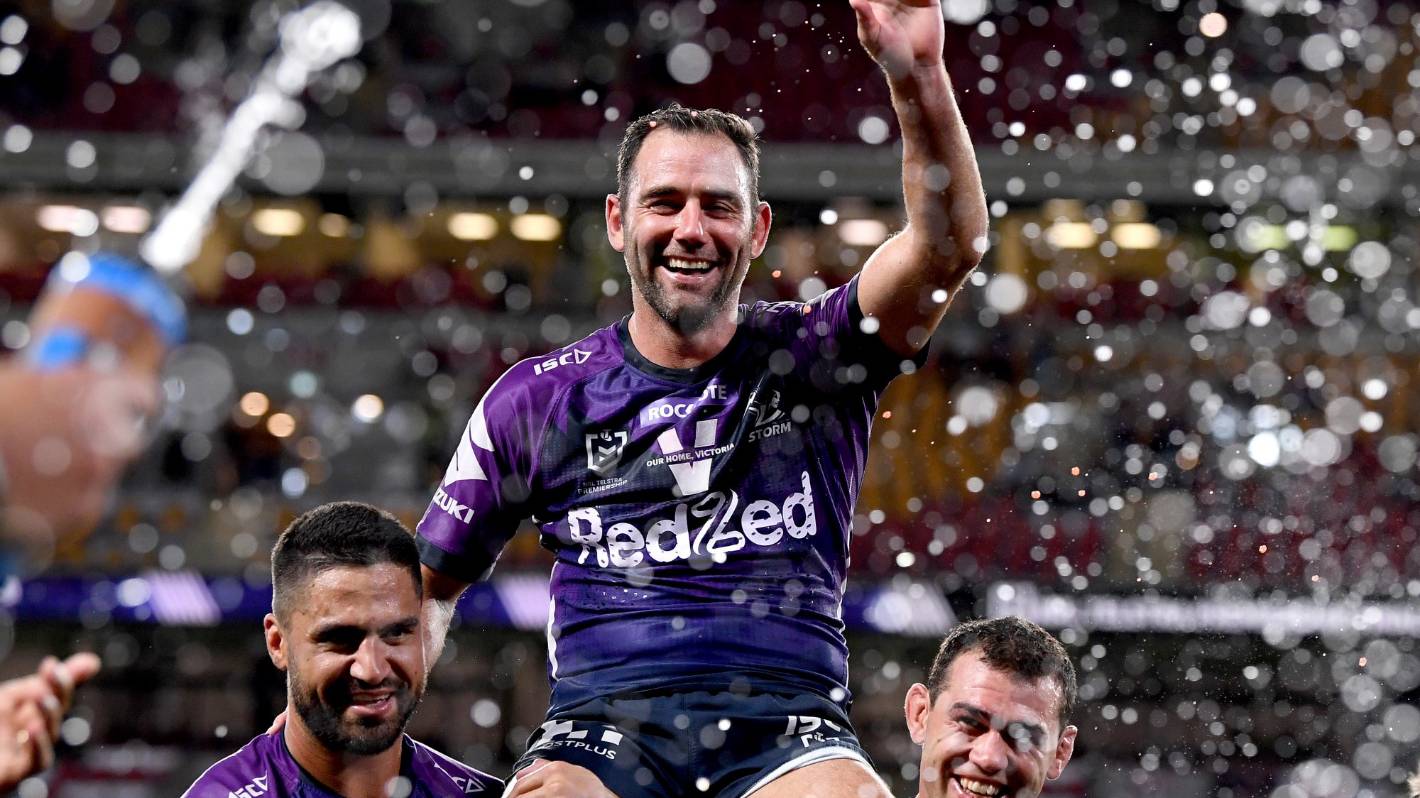 Cameron Smith of the Storm is chaired from the field after the NRL preliminary final match between the Melbourne Storm and the Canberra Raiders at Suncorp Stadium last week.

All the numbers point to Melbourne Storm great Cameron Smith playing on – except one.

Eight grand finals in 19 seasons, fourth in this year’s Dally M Medal tally despite missing four games, and voted the game’s No.1 hooker in 2020.

Given his form, this figure appears to be behind Smith’s torment over whether Sunday’s grand final against Penrith will be his 430th and last NRL game.

Should the Melbourne skipper call time, he will not bow out as the oldest to play in the NRL, with Paul Gallen soldiering on until he was 38.

Former Manly star Cliff Lyons was also a few months older than Smith when he retired.

Genuinely torn, Smith says not to expect a decision immediately following the grand final – win or lose – and that he will take some time before any announcement.

The Kangaroos and Queensland legend says he is not looking for a “sign” that it’s game over.

“After this game is finished I will do some thinking and make a decision,” Smith said.

“A lot of people have mentioned about whether or not we get a good result on Sunday and that will determine things, but I can confirm that that won’t make a difference whether we win or lose.

“It won’t determine whether I play on next year.”

If not Smith’s own age, then the age of his children appears to be a determining factor in his decision.

His oldest daughter Jada is in her first year at high school while son Jasper is 10 and youngest daughter Matilda, eight.

“The sacrifices you make in your own personal life and the commitment it takes to play in the NRL, for me it’s about weighing that up,” Smith told the Matty Johns family podcast.

“I’m 37 and that means my family are growing as well and my children are starting to get a little bit older.

“My eldest daughter is 12 and they’re starting to do a lot of things in their own life.

“It’s more to do with whether I’m committed to making those sacrifices any more.

“It’s not really about how good I feel I’m playing, or whether I can still make a difference to this footy side.

“It’s about whether I want to make that commitment any more.

Aayla Toman is passionate about rugby league but is banned from playing in any u13 leagues because she’s a girl.

“If this is to be my last game then I will have to adjust to life after playing footy.

“I have a beautiful family and I will have some great memories about the game if it is my last.

“If not, you will see me running around next year.”

Smith admitted that in 2018, when they lost the grand final to the Sydney Roosters, the Storm felt quite satisfied with their season given Cooper Cronk’s defection to the eventual premiers.

But with Jahrome Hughes established at No.7 and Ryan Papenhuyzen among the game’s best fullbacks, Smith felt more confident about Sunday’s deciding match.

“It’s great to see guys building their own careers at such a wonderful club and continuing the success that we’ve had here for such a long time.”