Hitler speeches sell for $40,000 at auction despite objections | Germany

The Best iPhone 12 Deals (And Which Model to Pick) 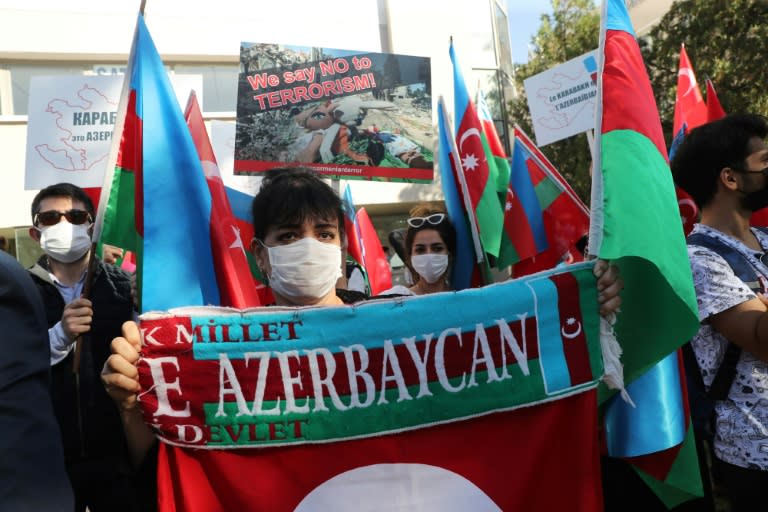 Turkey’s support of Azerbaijan in its conflict with Armenian separatists in Nagorno-Karabakh is loud and intensely partisan, and the tiny Armenian community in Turkey is feeling under pressure.

Since the clashes erupted, pro-Azerbaijan convoys carrying Azerbaijani flags have passed through districts of Istanbul housing Armenian institutions, unverified pictures of “massacres” attributed to Armenians have gone viral on social media and some official Armenian websites have been blocked.

Members of roughly 60,000 Armenians based mostly in Istanbul complain of hate speech since the flare-up of fighting on September 27, which has left hundreds dead and shows no signs of abating.

“I don’t dare to turn on the television at home —  but the hate speech is out there and the portrayal of Armenians as an enemy disturbs me extremely,” Silva Ozyerli, an Armenian living in Istanbul, told AFP.

“We are paying a price because the language of the state, the bureaucracy and the media is seeking to marginalise, spread hostility and I feel I am held hostage.

Azerbaijan and Armenia have been locked in a bitter conflict over Karabakh since Armenian separatists backed by Yerevan seized control of the mountainous province in a 1990s war that left 30,000 people dead.

Karabakh’s self-declared independence has not been recognised internationally, even by Armenia, and it remains a part of Azerbaijan under international law.

Turkey, which does not have diplomatic relations with Armenia, fervently backs Azerbaijan in its campaign to win back what it terms “occupied” territories.

Turkey shut its border with Armenia in 1993 in a show of solidarity with Azerbaijan over Nagorno-Karabakh.

But its relations with its Armenian population and its Christian neighbour have long been troubled over Ottoman-era killings.

Armenians contend they were victims of the first genocide of the 20th century at the hands of Ottoman forces in 1915, but Turkey insists there was no genocide and both sides committed atrocities as part of a conflict.

He said the situation was bleaker than during the 1990s conflict.

“You turn on the news channels in the evening which are continuously bashing Armenia. Armenia later becomes Armenians. This is naturally straining the Armenians in Turkey,” he said.

“What will we come across when we go out on the street? Yes, we are not expecting a physical attack but this can happen too. There’s always this concern among the people.”

Turkey has accused Armenia of committing “war crimes” against civilians with President Recep Tayyip Erdogan calling it a “rogue state”.

But in a speech on October 14, Erdogan made clear his comments were intended only against Armenia the country, not Armenians in Turkey who “benefit from every kind of opportunity in our country”.

“We have never taken a negative attitude toward them,” he said.

But Armenians say they are growing weary with the rising nationalism.

Danzikyan took over from Hrant Dink, an advocate of reconciliation between Turks and Armenians who was shot dead outside his offices in 2007.

In comments in Agos this month, his daughter Delal summed up the feelings.

“Armenians around me have been grieving as they hear a bag of words ‘Armenians are like this, or like that’ every day,” she wrote.

Garo Paylan, an Armenian lawmaker from the pro-Kurdish HDP party, was accused of treason by nationalist groups when he urged the government “not to add fuel to the fire” in Karabakh.

“I only said there will be no winners in this war,” he told AFP. “Unfortunately, opposing war is enough to make you a target in Turkey.”

He said if anything happens to him, the government should be held accountable because of the hate speech he blames on Ankara.

“We lost Hrant Dink in such a climate. It’s only a climate of peace and a democratic Turkey that could ensure my safety,” he said. “Otherwise, none of us are safe.”