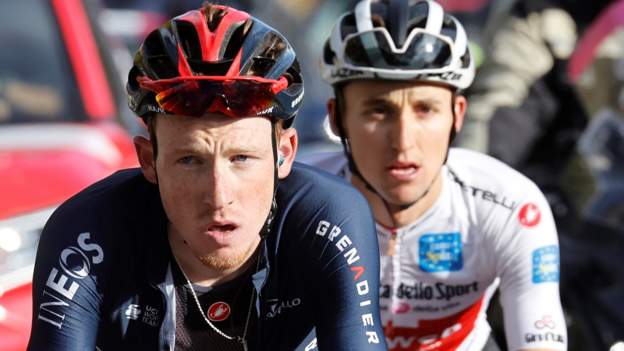 Britain’s Tao Geoghegan Hart rode himself right into contention to win the Giro d’Italia after finishing a superb second on a dramatic stage 18.

The Ineos Grenadiers rider fought superbly up the Stelvio Pass, the hardest climb in the race which tops out at 2,757m, to claw back more than two minutes in the overall standings.

Joao Almeida lost the pink jersey when he was dropped on the Stelvio after first Sunweb and then Ineos Grenadiers pushed the pace up the switchbacks of the towering climb in the Alps.

A new star is born

Not for the first time, the Stelvio cracked a famously unpredictable race wide open.

With about 50km to go, as riders climbed up the famous ascent near Bormio on the Italian-Swiss border, the main contenders began to suffer in the cold temperatures.

First, Deceuninck-Quick Step’s Almeida – who had held the leader’s pink jersey since stage three – started to fall to the back of the peloton and was eventually dropped, as Sunweb sensed he was struggling and further upped the pace.

But as Ineos joined in setting the pace, new leader Kelderman began to lose the wheels of Geoghegan Hart, 25, his Ineos team-mate Rohan Dennis and Hindley,

Australian former world time trial champion Dennis led the rest of the effort up the remaining kilometres of the famous 25km climb, as ribbons of tarmac snaked around the snow-covered mountain.

Hindley, the second Aussie in the trio, even came close to falling off his bike at one point trying put on a jacket, as he briefly rode uphill with no hands, before the freezing descent.

Geoghegan Hart took over as the three descended, holding his nerve brilliantly over streams of melting snow.

Dennis, fell away as Hindley and Geoghegan Hart attacked the final climb, with Hindley finishing the stronger as Geoghegan Hart did most of the work in latter stages.

Ineos’ season could be saved

East Londoner Geoghegan Hart is known to be a promising talent and a talented climber, but Ineos expected they would have only to fight for stage wins after they lost race favourite and team leader Geraint Thomas.

The Welshman crashed on stage three when a loose drinks bottle became lodged under his front wheel, leading to him fracturing his pelvis and ending his season.

Geoghegan Hart won stage stage 15 to Piancavallo, and stayed in touch in the general classification despite being more than three minutes behind.

He has shown more strength than all of the leaders, including Kelderman, who at one point looked as though he might not take the overall lead but rallied before the final climb.

Of the three in closest contention, Geoghegan Hart is thought to be marginally the best climber, as the race heads for another battle in the mountains over Sestriere on Saturday before a final-day time trial to Milan.

And with neither Kelderman nor Hindley renowned time triallists, there is everything to play for heading into the final few days.