Waving flags, they sang Nigeria’s anthem. Then they were shot at | Nigeria 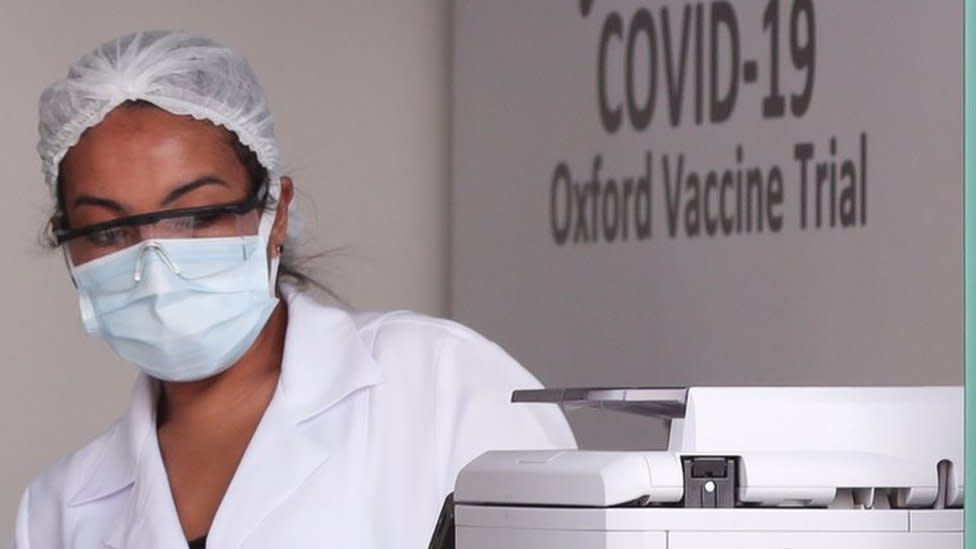 Trials of a Covid-19 vaccine being developed by AstraZeneca and Oxford University will continue, following a review into the death of a volunteer in Brazil.

Brazil’s health authority has given no details about the death, citing confidentiality protocols.

The BBC understands that the volunteer did not receive the vaccine.

Only around half the volunteers in the trial are given the actual Oxford University Covid-19 vaccine. The second group are being given an existing licensed vaccine for meningitis.

Neither the participants nor their families know which vaccine they are being given.

This enables the researchers to compare the results for the two groups in order to measure whether the vaccine is effective.

AstraZeneca said in a statement that it could not comment on individual cases but it “can confirm that all required review processes have been followed”.

“All significant medical events are carefully assessed by trial investigators, an independent safety monitoring committee and the regulatory authorities,” it said. “These assessments have not led to any concerns about continuation of the ongoing study.”

There are high hopes that the vaccine could be one of the first to make it onto the market.

It had successful phase 1 and 2 testing, while phase 3 testing is being carried out on participants in countries including the UK, Brazil and India.

Trials of the Oxford vaccine were paused last month after a reported side effect in a patient in the UK, but were resumed days later when it was deemed safe to continue.

Phase 3 trials in the US remain on hold while the regulator there conducts its own assessment.

Brazil’s health authority Anvisa said it was informed of the Brazilian volunteer’s death on 19 October.

In a statement, Oxford University said: “All significant medical incidents, whether participants are in the control group or the Covid-19 vaccine group, are independently reviewed.

“The independent review, in addition to the Brazilian regulator, have both recommended that the trial should continue,” it said.

Brazil has plans to purchase the vaccine if it is approved.

Brazil has had nearly 5.3 million confirmed coronavirus cases – the third highest tally in the world after the US and India – and is second only to the US in terms of deaths, with nearly 155,000 registered so far, according to data collated by Johns Hopkins University.