Many killed and wounded in visa stampede 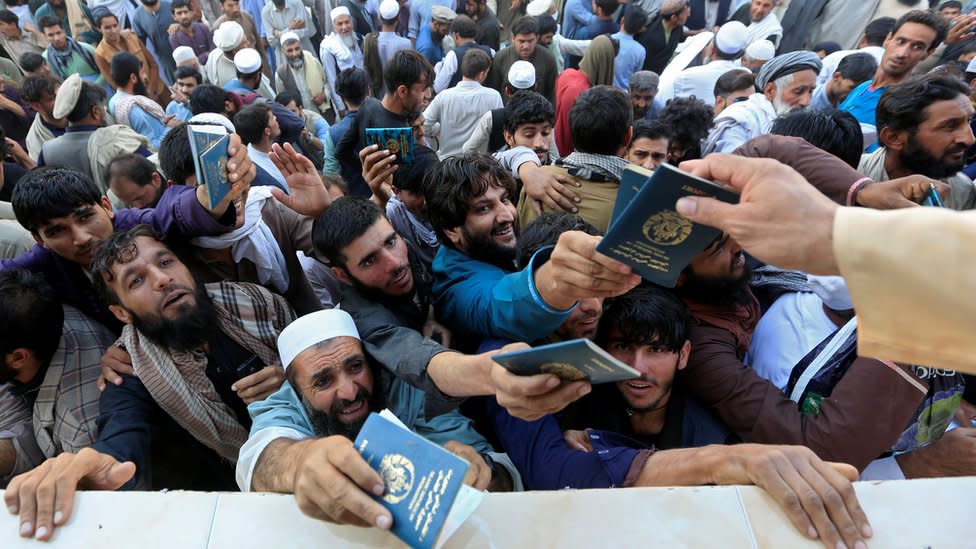 At least 11 women have been killed and many more injured in a stampede in a stadium in Afghanistan where people were applying for visas, officials say.

The incident happened after “thousands of people” gathered to request permits to Pakistan, a local spokesman said.

The crowd had been redirected to a sports stadium instead of the usual visa centre in the city of Jalalabad.

Visa applications to Pakistan have just resumed after a seven-month pause due to the pandemic.

“The visa applicants jostled to secure their token from the consulate officials,” an official in Jalalabad said, according to Reuters.

“The crowd got out of control, leading to a stampede.”

Pakistan’s ambassador to Afghanistan, Mansoor Ahmad Khan, said he was “deeply saddened” by the incident and that his country was “engaged with Afghan authorities for better facilitation of visa applicants”.

Deeply saddened at the reports of casualties at a stadium in Jalalabad 5 km from Pakistani Consulate where visa applicants were being organized by Afghan provincial authorities. We sympathize with the families of victims.

In the conservative Muslim society of Afghanistan, it is common that women and men queue separately.

It is thought a number of other women and elderly people have also been injured.

Many Afghans travel each year to neighbouring Pakistan to visit relatives, seek medical treatment, find jobs or escape the ongoing violence in their own country.

Expecting a large number of applicants after the long pause of the visa service, the Pakistani consulate in the eastern province of of Nangarhar, directed the crowd to a nearby football stadium.

“Unfortunately this morning tens of thousands of people had come to the football stadium which led to the tragic incident,” the provincial governor’s spokesman Attaullah Khogyani told AFP news agency.