This week in The Ladies’ Room: Kate Scott

The painstaking work of restoring a painting stolen at gunpoint Contestants from The Bachelor NZ and The Bachelorette NZ united for a glorious televised pool party this week, suggesting the franchise could be ready to go to paradise.

Mates, they saved the best till last. The Bachelor NZ After Party – a special episode to close off both The Bachelor NZ and The Bachelorette NZ seasons – was easily the greatest hour of the entire 2021 franchise. This is what you came for, New Zealand, and if you shut your eyes and rubbed your rose quartz crystal hard enough you could imagine this was Bachelor in Paradise. And, if you listened to the poolside flirting, the banter could have even been lifted straight from the canned season of Love Island NZ. It was a reality TV miracle, and it was a bloody good watch. The cocktails flowed and the walls came down, and we learned more about these people in one hour than we had across both seasons. Truths were revealed and new connections made, and we found out what happens when you put a dynamic group of people together and leave them to it: entertaining television. It worked a treat, and the sooner we get BIP NZ, the better. This is the ideal party to be invited to, the kind where it’s fine to sit in a corner dropping chip crumbs down your top while you watch beautiful people involve themselves in drama. Evening gowns at a barbecue? It’s a recipe for disaster, but I mopped up every greasy drop. 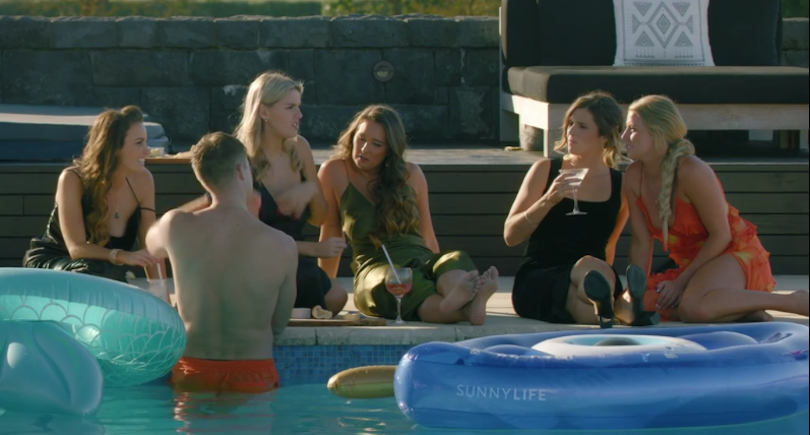 This is how Sir David Attenborough must feel when he’s watching important animal stuff happen in the real world, or how Todd felt when he tried paddle boarding with Lexie, or when Lana smooched the wet clay during her pottery date with Moses. It’s slightly confusing and a little bit wrong, but compelling to watch. That’s the Bachelor franchise in a nutshell, right? It is what it is, as they say on Love Island, and nobody can argue with science like that. Speaking of science, this reality experiment proved the hypothesis that you can find love on a reality show. Here are 10 of the most surprising pairings that popped up during the after party.

Annie and the pool toy “I thought this was a pool party, motherfuckers!” Annie’s words are exactly what I want to shout whenever I see people swimming lengths at the local pool, because BORING, you healthy water nerds. Annie discovered a party with her ex-boyfriend and a group of women she couldn’t connect with wasn’t all it was cracked up to be. Praise be to the hero of the hour, this humble inflatable toy that supported Annie in times of trouble, holding her close and guiding her safely across awkward waters. This is what love looks like, motherfuckers! 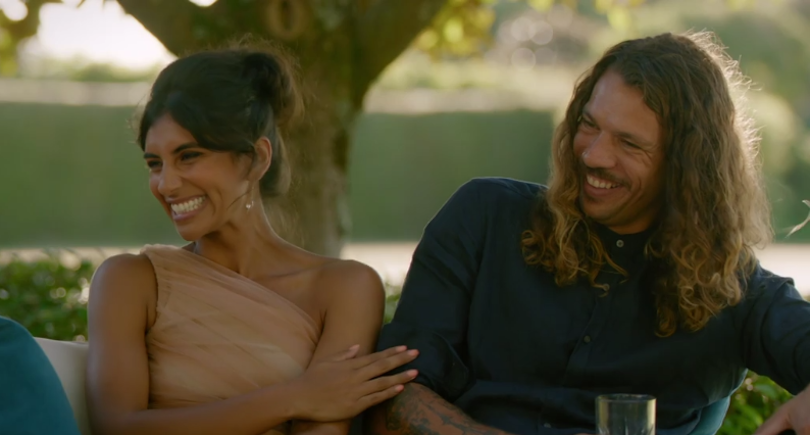 Cupid’s arrow struck the hearts of Paul and Shivani, bringing the seasons together in a union wilder than your best cheese dreams. Shivani arrived at the Bachelor mansion with a pineapple and Paul is a chef who probably puts pineapple on pizza, so you could say it’s written in the fruity stars. Does Lexie still have the key to Paul’s Parisian apartment? We’re going to need that back. Before we go any further, Vaz feels he’s been unfairly typecast as the bloke who takes his shirt off on TV. Vaz doesn’t want to be known just as the shirtless wonder, and after he’s taken off his shirt he’d like to talk more about how he won’t take his shirt off again. Instead, let’s talk about Vaz and Dev, who have some “history in the past” that may or may not involve Vaz taking off his shirt but WE’RE NOT TALKING ABOUT IT OK.

Joe and his delicious barbecue dinner Definitely here for the right reasons. 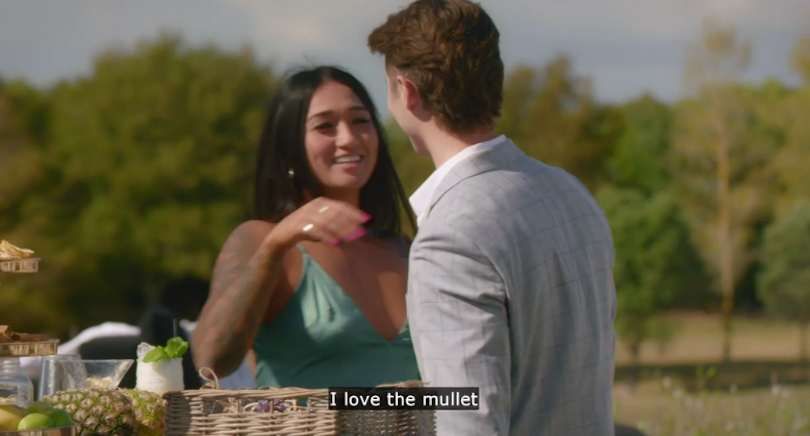 Nothing bought Negin more joy at the after party than Jack’s baby mullet. It was business at the front, party at the back – much like The Bachelor NZ season itself – and Negin declared her undying love for his long-ish locks a solid three times. You can’t put a limit on mullet love, so will you accept this rose, Jack’s mullet? Cheers, see you in the fantasy suite. 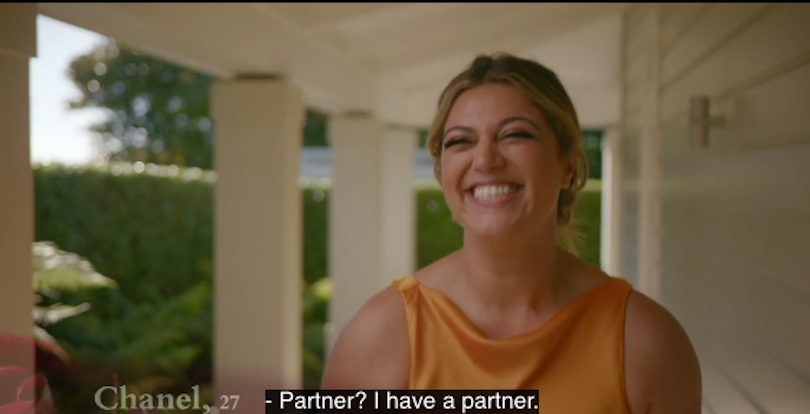 These four contestants were delighted to announce they’d all found love after the show ended, proving that paddle boarding on national television is not the only way to find your soulmate.

Moses and his crystal trees 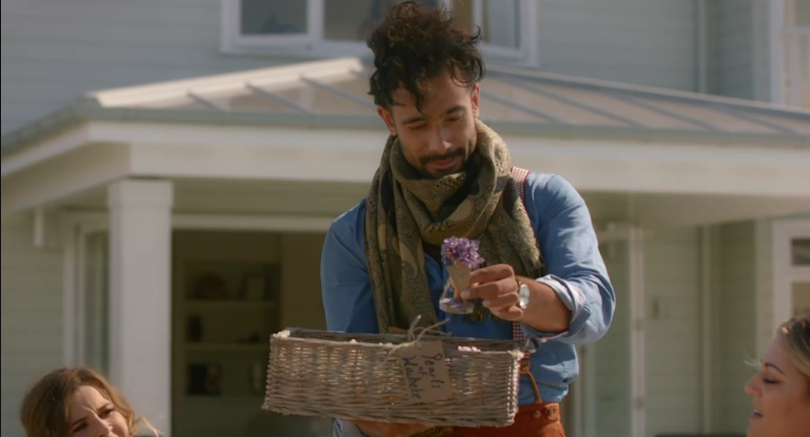 It’s good manners to show up to a party with a gift and it’s good manners to give your numerous ex-girlfriends a crystal tree, so congratulations everyone, I now pronounce you husband and crystal quartz. The trees were a gift to the women from Moses and his mum, and now that trees are going to save the planet, this might just be the happy ending we’ve all been looking for.

The Mole and everyone It’s our favourite top-secret mole Sarah from The Bachelorette NZ, laughing as if she wasn’t at the centre of the most clandestine undercover operation New Zealand television has seen. Save yourself Sarah, this is not part of your training. James Bond would never put up with this. 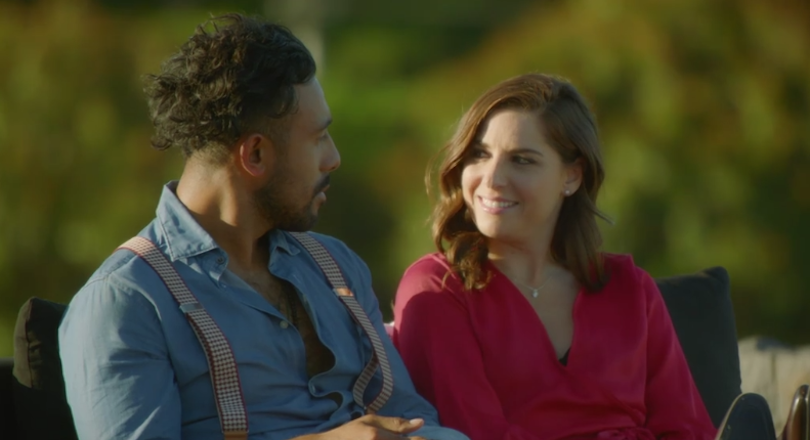 These two pals bonded over their shared experience of running a bewildering human gauntlet of romance, and Lexie got more truth out of Moses in five minutes than five weeks of Art Green chinwags. I could have listened to these two natter on for ages. Maybe I did, maybe I didn’t watch it five times just to see them sit in the setting sun and ruminate on this wicked game of love. The heart wants what the heart wants, tell it to your crystal tree.

The cast and their contracts

Nothing can ever come between them, so RIP us.

In the latest episode of The Real Pod, Alex Casey and Jane Yee farewell The Bachelor/ette NZ for 2021 and recap the week’s fights on MAFS AU. Subscribe and listen on Apple Podcasts, Spotify or your favourite podcast provider.

Subscribe to The Bulletin to get all the day’s key news stories in five minutes – delivered every weekday at 7.30am.