More Lightning in the Arctic Is Bad News for the Planet 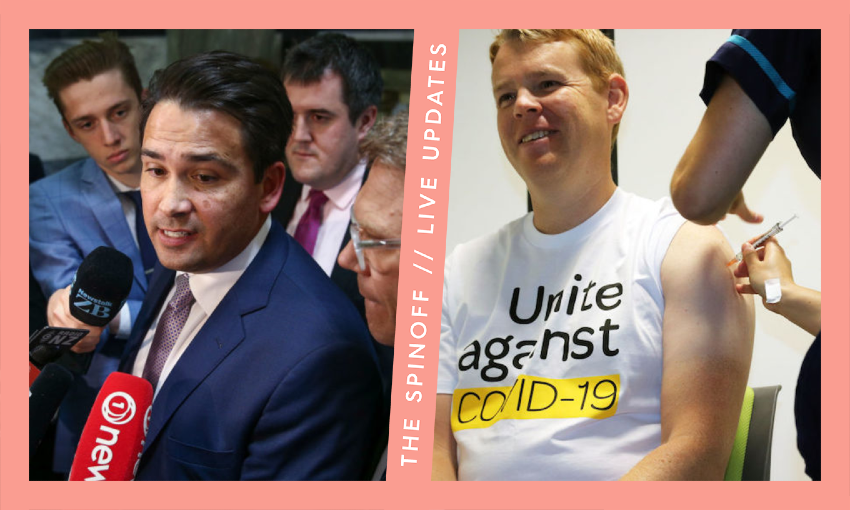 Welcome to The Spinoff’s live updates for April 8, bringing you the latest news throughout the day. Get in touch at stewart@thespinoff.co.nz

The Spinoff can’t exist without our members. If you want to help us stay curious and keep our team across New Zealand’s breaking stories, please donate today.

8.40am: Could Bridges return to the National leadership?

A (paywalled) report in the NZ Herald this morning that I thought I’d draw your attention to. Political writer Claire Trevett has claimed that work is under way to reinstate Simon Bridges as leader of the National Party with up and comer Chris Luxon as his deputy.

The claim is that Bridges would be paving the way for a Luxon leadership further down the track.

Of course, it would be unusual for a former leader to return to the top job so soon; Bridges was leader throughout the nationwide Covid-19 lockdown, before being replaced by Todd Muller.

As Trevett writes, Bridges would effectively be seen as an interim leader and there would be constant speculation about whether Luxon would roll him. What there is in this plan for Bridges, I don’t know.

8.00am: New government advisory group to look at vaccine target and border restrictions

It will be headed by epidemiologist Sir David Skegg, according to RNZ, and be in place until mid next year.

Yesterday, National criticised the government for being behind schedule with the vaccine roll-out, citing a leaked document dated January that showed we should have given out almost 400,000 doses of the Pfizer jab by now (we’re sitting at around 90,000).

While the new group will still report to cabinet, with the government having the final say on matters involving the Covid-19 response, it will ensure future decisions were “informed by the best available scientific evidence and strategic public health advice,” said minister Chris Hipkins.

Along with determining a possible vaccine target, the group will assist government with issues around the border.

Associate health minister Ayesha Verrall added: “[The group] will have an opportunity to feed directly and through myself and minister Hipkins to cabinet and they will be incredibly important, but those decisions are so important that we are trying to get a range of different information from within and outside government,” said Verrall.

“The government will be seeking their advice on issues such as how much of our population needs to be vaccinated before we can relax our border settings, evidence for transmission blocking properties of the vaccine, strategic public health controls when the borders reopen and public health responses to any new variants that aren’t covered by our current vaccine options.”

Alongside Skegg, other members of the group include epidemiologist Philip Hill and special advisor to the group Shaun Hendy.

I’ve said it before, but the Covid-19 vaccine rollout is probably the most important single programme the government will run this year. And now, we’re going to get a much better idea of how it’s all going. The data will be published weekly on the health ministry website, and so far shows that just over 90k doses have been administered, with just under 20k of those second doses – meaning those people are now effectively protected against Covid. Stuff’s Kate Newton has gone through the data in a bit more granular detail, to pick out the key details.

Those numbers are slightly below the plan also published on the website. But it’s not exactly clear what plan is being referred to there. A document put into the public domain by National MP Chris Bishop – apparently produced by the ministry – suggests that the country should be hundreds of thousands of doses in by now, reports Newstalk ZB. That’s heavily disputed by Covid-19 minister Chris Hipkins, who said it was “likely to be an early working document that was shared with some DHBs”, rather than any formal plan.

The timing of this is curious, given questions were starting to be raised about why data wasn’t being provided proactively. For example, that very morning there was an excellent analysis by NZ Herald (paywalled) data journalist Chris McDowall, who noted that up to that point there had been “opaque and messy handling of public health data.”

It’s also considerably slower than some comparable countries. It’s important not to get too carried away on this point, because there are still plenty of countries around the world where approximately zero vaccines have been delivered or administered. And it is a complex operation that needs to be done right. But the number in New Zealand is quite a bit lower per-capita than Australia, for example, and some parts of the Aussie media have described that as “disastrous”. Newshub reports PM Ardern has defended the progress on the grounds that it was always meant to start slower and ramp up – “we’re hoping to see that catch-up occur in the coming weeks,” she told parliament.

Meanwhile, a new Covid-19 vaccine is being sent to Medsafe for approval to be used in New Zealand. One News reports five million doses of the Janssen Jab have been provisionally purchased, contingent on it being signed off. This particular variant of the vaccine is currently authorised for use in more than thirty countries.

Subscribe to Rec Room a weekly newsletter delivering The Spinoff’s latest videos, podcasts and other recommendations straight to your inbox.