What happens on the day Joe Biden and Kamala Harris are sworn in?

There Should Be a Nobel Prize for Vaccine Logistics 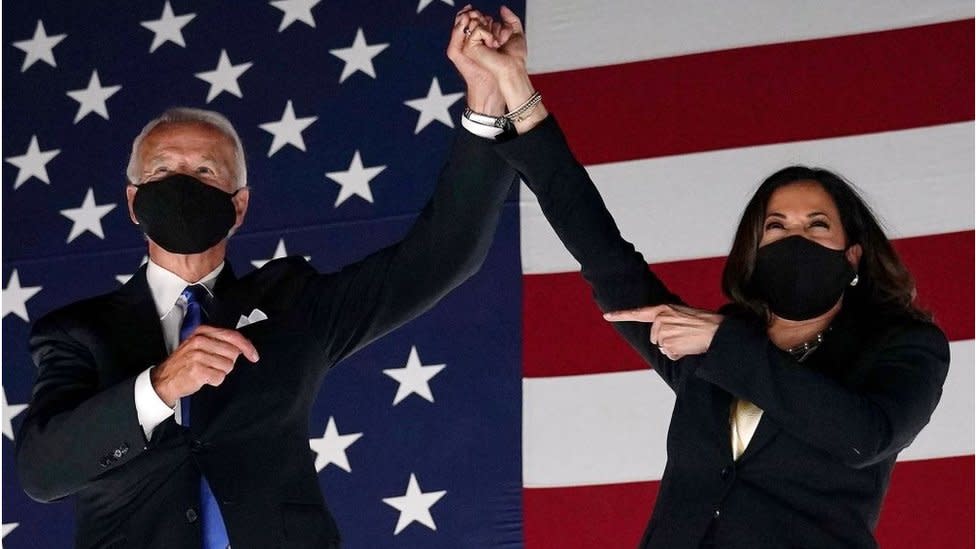 President-elect Joe Biden won’t officially make his move to the White House until inauguration day – a political parade of sorts, when the Democrat and his Vice-President Kamala Harris take the oath of office.

From the guest list to Covid-19 changes, here’s everything you need to know about the big day.

What is the inauguration?

The inauguration is the formal ceremony that marks the start of a new presidency, and it takes place in Washington DC.

Once he utters these words, Mr Biden will then take his place as the 46th president and the inauguration will be complete (but that’s not all – celebrations follow).

Kamala Harris will become vice-president once she takes the oath of office, which usually happens just before the president is sworn in.

When is Biden’s inauguration?

By law, inauguration day is 20 January. Opening remarks are usually scheduled for around 11:30 EST (16:30 GMT) and Joe Biden and Kamala Harris will be sworn in at midday.

Mr Biden will move into the White House later in the day – his home for the next four years.

How will Covid-19 change this year’s inauguration?

In normal circumstances, Washington DC would see hundreds of thousands of inauguration revellers flock to the city, swarming the National Mall and selling out hotels – an estimated two million came when President Obama was sworn in for his first term in 2009.

But this year, the celebration’s size will be “extremely limited”, the Biden team has said, and it has urged Americans to avoid travelling to the capital.

Mr Biden and Ms Harris will still take their oaths in front of the US Capitol, overlooking the Mall (a tradition that started with President Ronald Reagan in 1981) but viewing stands that had been constructed along the parade route are being taken down.

In the past, up to 200,000 tickets were up for grabs to attend the official ceremony, but this year, with infections still surging across the US, only around 1,000 tickets will be available.

This year, there will still be a “pass in review” ceremony – a traditional part of the peaceful transfer of power, where the new commander in chief inspects the troops, but instead of the usual parade down Pennsylvania Avenue to the White House, organisers say they will host a a “virtual parade” across the US.

Mr Biden, Ms Harris and their spouses will then be escorted to the White House by members of the military, including a band and drum corps.

How do you get inauguration tickets?

Tickets are required for seated and standing areas near the stage and seats along the parade route in normal years, but the rest of the National Mall is open to the public.

If you want to watch the inaugural ceremonies from up close, you’ll need to talk to your local representatives first.

Inaugural balls and other related events around the city require separate tickets.

Senators and members of Congress are the keepers of the keys. Each has an allotted number of free tickets that they can distribute.

This year’s pandemic-restricted number amounts to each lawmaker plus a guest. Commemorative tickets will be available for constituents after inauguration day.

Will Trump be there?

It’s become customary for the outgoing president to watch the next in line be sworn in, which can make things awkward.

This year, there’s some speculation that Mr Trump may boycott Mr Biden’s swearing in. The president has still not conceded the race, and has refused to say if he will show up.

Some of his supporters have taken it a step further, planning a virtual “second inauguration” for Mr Trump on the same day (and time) that Mr Biden takes office. More than 68,000 people have said on Facebook they will attend the online event to show their support for Mr Trump.

For his part, Mr Biden has said he hopes his predecessor attends in order to set a positive example of a peaceful transition of power.

But Mr Trump’s presence is “not on the top 10 list” of the president-elect’s priorities, incoming press secretary Jen Psaki said this month.

When Mr Trump was sworn in, Hillary Clinton joined her husband, former President Bill Clinton, at the inauguration – just two months after her election defeat and a bitter campaign against Mr Trump.

Only three presidents – John Adams, John Quincy Adams and Andrew Johnson – have sat out their successor’s inaugurations, and none in the last century.

Mr Biden has not yet announced who he’ll have on stage with him to lend some star power. Expect some big names.

In recent years, incoming presidents have added some of the country’s most beloved performers to the day’s programme.

In 2009, Aretha Franklin turned out for Barack Obama’s inauguration, performing My Country ‘Tis of Thee. Beyoncé was also on hand, singing At Last to the first couple at Mr Obama’s inaugural ball.

At his second inauguration in 2013, President Obama called on Kelly Clarkson and Jennifer Hudson to do the honours. Beyoncé was back again, this time to sing the national anthem.

Why is the inauguration in January?

A January inauguration wasn’t always the case – the Constitution initially set 4 March as the day for new leaders to take their oaths of office.

Selecting a date four months from the November general election made sense at the time given how long it took for votes from across the country to trickle in to the capital. But this also meant the lame duck period – the time when an outgoing president is still in office – was quite long.

Eventually, as modern advances made it easier to count and report votes, this lengthy time frame was changed. The 20th Amendment, ratified in 1933, decreed the new president would be inaugurated on 20 January instead.