Donald Trump should not be prosecuted after leaving office 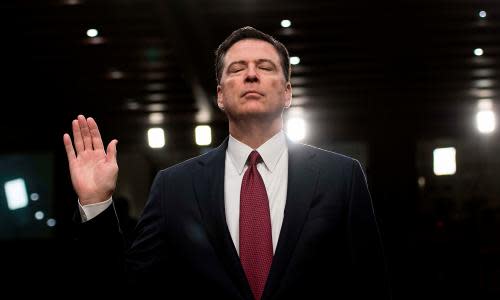 Donald Trump should not be prosecuted once he leaves the White House no matter how much evidence has been amassed against him, the former FBI director James Comey writes in a new book.

“Although those cases might be righteous in a vacuum,” Comey writes, “the mission of the next attorney general must be fostering the trust of the American people.”

That opinion is likely to surprise many – perhaps including Trump himself – as Comey has emerged as a powerful critic of Trump and has been the frequent target of threats and insults from the 45th president.

Comey was fired by Trump in May 2017, an act that prompted Mueller’s appointment to investigate Russian election interference and links between the president and Moscow.

Comey’s new book, Saving Justice: Truth, Transparency and Trust, is his second and will be published on 12 January. The Guardian obtained a copy.

The 60-year-old’s first book, A Higher Loyalty, was released in April 2018 and last year adapted for a two-part HBO film, The Comey Rule, starring Jeff Daniels as the author and Brendan Gleeson as Trump.

Comey’s high profile since leaving government has earned him as many critics as supporters and his new book will be closely examined. He writes that it is for “ordinary citizens, not legal experts or historians”, and is meant to be a guide to rebuilding institutions battered by Trump.

Biden will be inaugurated on 20 January but has not yet named his nominee for attorney general. The former deputy attorney general Sally Yates, who briefly led the department while Comey led the FBI and was also fired by Trump, is among reported frontrunners. So is the former Alabama senator Doug Jones.

In his new book, Comey revisits scenes from his first, from his early work on high-profile mafia cases to his handling of the investigation of Hillary Clinton’s email use and his brief service under Trump, including his refusal to drop the investigation of Michael Flynn, Trump’s first national security adviser, over his own links to Russia.

Comey excoriates William Barr, Trump’s second attorney general, who ran interference over Mueller’s final report. Barr claimed Trump had been exonerated of obstruction of justice when he had not. He also sought to drop the case against Flynn for lying to the FBI before Trump pardoned his former aide anyway.

Comey does not think Flynn should be investigated further.

He writes that he doubts whether Trump should be pardoned by his successor, as was Richard Nixon, the president who resigned in disgrace over the Watergate scandal in 1974, by Gerald Ford.

Trump has reportedly considered issuing a pre-emptive pardon to himself. Whether he can do that is up for debate. Comey points to the 1915 supreme court ruling which says a presidential pardon amounts to a confession of guilt.

But he writes: “By pardoning a resigned president, Ford had held [Nixon] accountable in a way that Trump would not be, even where he to be pardoned after losing re-election. That might not be enough accountability in Trump’s case. Or it may be, especially if local prosecutors in New York charge Trump for a legacy of financial fraud.”

Saving Justice was completed after Trump’s defeat by Biden. The president has refused to concede, a stance which led to the call last weekend in which Trump sought to have a Georgia official overturn the state’s result, an action that has prompted calls for criminal investigation or even a second impeachment.

Commending the example of Edward Levi, the law professor appointed attorney general by Ford after the trauma of Watergate, Comey says the next head of the US justice system must lift the department “above the partisan scrum”.

Comey laments Trump’s naked partisanship and lying but also that of notionally apolitical officials, most prominently including Barr, who resigned last month. The “traditional blindfold on Lady Justice”, Comey writes, has been “replaced with a MAGA hat”.

Advocating renewed transparency, he adds: “Whether or not our next president pardons Donald Trump, and whether or not the Department of Justice pursues him, the American people should be told why.”