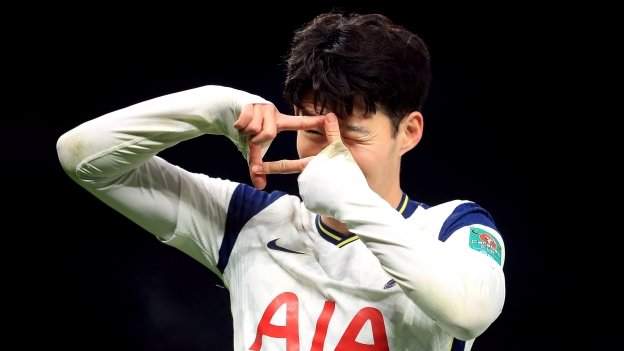 Jose Mourinho moved Tottenham Hotspur to within one game of their first trophy in 13 years as they earned a Carabao Cup semi-final win over Brentford.

Spurs have not claimed silverware since they beat Chelsea in the 2008 League Cup final and they were made to work hard before seeing off the Championship promotion chasers in this one-leg semi-final at Tottenham Hotspur Stadium.

Brentford had beaten four Premier League sides in the run to their first major semi-final but they were behind after only 12 minutes when Moussa Sissoko headed Sergio Reguilon’s cross beyond Bees’ keeper David Raya.

Thomas Frank’s side thought they had equalised after the hour when top scorer Ivan Toney headed in but the goal was ruled out for the most marginal of offsides when the striker was actually down on his haunches earlier in the move.

Spurs increased Brentford’s sense of injustice when Son Heung-min raced clear to add a second after 70 minutes before the visitors were reduced to 10 men following Josh Dasilva’s foul on Pierre-Emile Hojbjerg.

Mourinho’s side will now meet either Manchester United or Manchester City the final at Wembley in April.

Mourinho makes it his business to win trophies – and this competition has always been a building block in his strategy for success.

He regards the EFL Cup as vital in not just making his mark at a new club but also in giving his players the confidence that comes with securing silverware.

He believes that if this competition can end Spurs’ long trophy drought, it can be the platform for bigger things. He wants to rid the club of their ‘nearly’ tag, of a reputation for falling just short of success, as they did most recently in the 2019 Champions League Final against Liverpool in Madrid.

Mourinho always takes the competition very seriously and rarely fields anything other than full-strength sides. If Spurs beat either Manchester United or Manchester City in the final at Wembley in April, that policy that will be fully justified.

This was ultimately a disappointment for Brentford in their first major semi-final but there is no doubt bigger things await this talented side assembled by manager Frank.

They were never outplayed at any stage of this semi-final and will certainly argue the merits or otherwise of the decision that saw Toney’s goal ruled out, a VAR verdict that brought a rueful smile from their manager.

He has a positive, confident team and it is easy to see why Brentford lie fourth in the Championship and will be promotion contenders once more.

They look good to challenge again after missing out to Fulham in last season’s Championship play-offs, and then selling striker Ollie Watkins to Aston Villa and winger Said Benrahma to West Ham.

Brentford have proved their pedigree by seeing off a top-flight quartet Southampton, West Bromwich Albion, Fulham and Newcastle United in this competition – and while there is disappointment in defeat it will not dent their belief they can make a real tilt at reaching the Premier League.