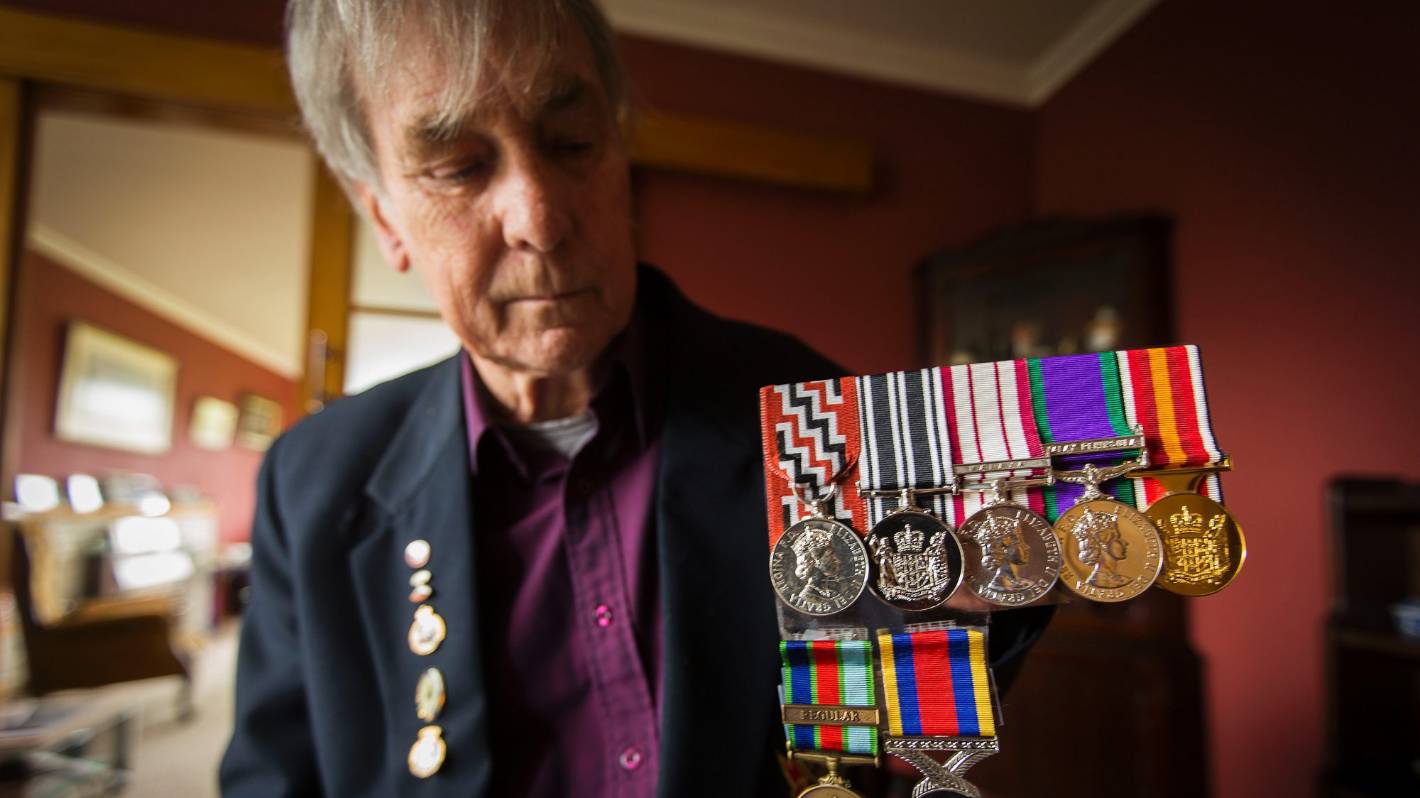 Roy Sefton, who has died aged 82, displays his medals for Stuff in 2016. The last medal on the right of the top line is his medal for nuclear test veterans.

A creative mind and determined spirit is being remembered for his advocacy, compassion and sense of humour.

Sefton was one of more than 500 young Kiwi sailors who witnessed British nuclear tests in the South Pacific, off the Christmas and Malden islands, in 1957 and 1958 from the decks of HMNZS Pukaki and HMNZS Rotoiti. Sefton, a radio operator, was aboard HMNZS Pukaki during what was known as Operation Grapple

Rudimentary protective equipment did little to protect the men from the radiation-filled air during the 10 exposures, leaving them and their descendants facing health problems.

Sefton never forgot the sensation he felt when witnessing the explosions. He and his crew-mates were there, ostensibly, to collect weather data.

“Right on cue there was this massive light that came through mine and everybody else’s hands, through the dark glasses, through the closed eyes, and what I saw was an X-ray vision of my own hands,” he told Stuff in 2016.

Sefton and his family have a history of chronic fatigue, and worry when a doctor’s visit beckons. Other sailors and their children and grandchildren face serious health effects.

Studies have shown the sailors suffered severe genetic damage, but recognition or an apology from official channels hasn’t come, despite lobbying from Sefton in his long-term role as chairman of the New Zealand Nuclear Test Veterans’ Association.

An overview on the Veterans’ Affairs website says: “A comprehensive set of procedures and arrangements were put in place by British authorities to minimise risks associated. The precautions were based on the best available knowledge at the time.”

Daughter Anu Sefton said the association work consumed her father. It was 12 hours a day, seven days a week.

Roy Sefton died of natural causes at Palmerston North’s Arohanui Hospice on Tuesday morning, and until his health took a turn for the worst recently he was still advocating for the association and its members.

He received a Queen’s Service Medal for his efforts, which includes securing war pensions for veterans.

“He was tenacious,” Anu Sefton said.

“Touch wood, we’ve come out fairly lucky – luckier than a lot of other families that were struggling.”

Anu Sefton said her father’s advocacy extended beyond New Zealand’s borders. He travelled to Paris in the early 2000s to lobby to lift a ban on Tahitians talking about the effects of French nuclear testing in the South Pacific.

Roy Sefton also found his calling as an artist, studying fine arts in Hawaii and, in the mid-1970s, giving up his job at the Post Office to devote himself to his craft.

His works were exhibited in galleries throughout Palmerston North and sold widely. He specialised in landforms on canvas, but in the 1990s moved to abstract acrylic on hardwood.

She remembers him for his compassion and humour. “He was a funny, funny man, full of stories.”

He was summed up well in his navy record, which said he always spoke his mind. “Problem is”, it said, “he’s usually right.”

Roy Sefton was born in Foxton and is survived by his wife Joan, two daughters, Anu and Tracey, four grandchildren and five great-grandchildren.

Roy Sefton’s funeral is at Robert Cotton and Sons on Main St, Palmerston North, at 10am on Monday. All are welcome. A Givealttle page has been created to help with funeral expenses.