At Georgia rally, Trump sounds less certain that victory is at hand 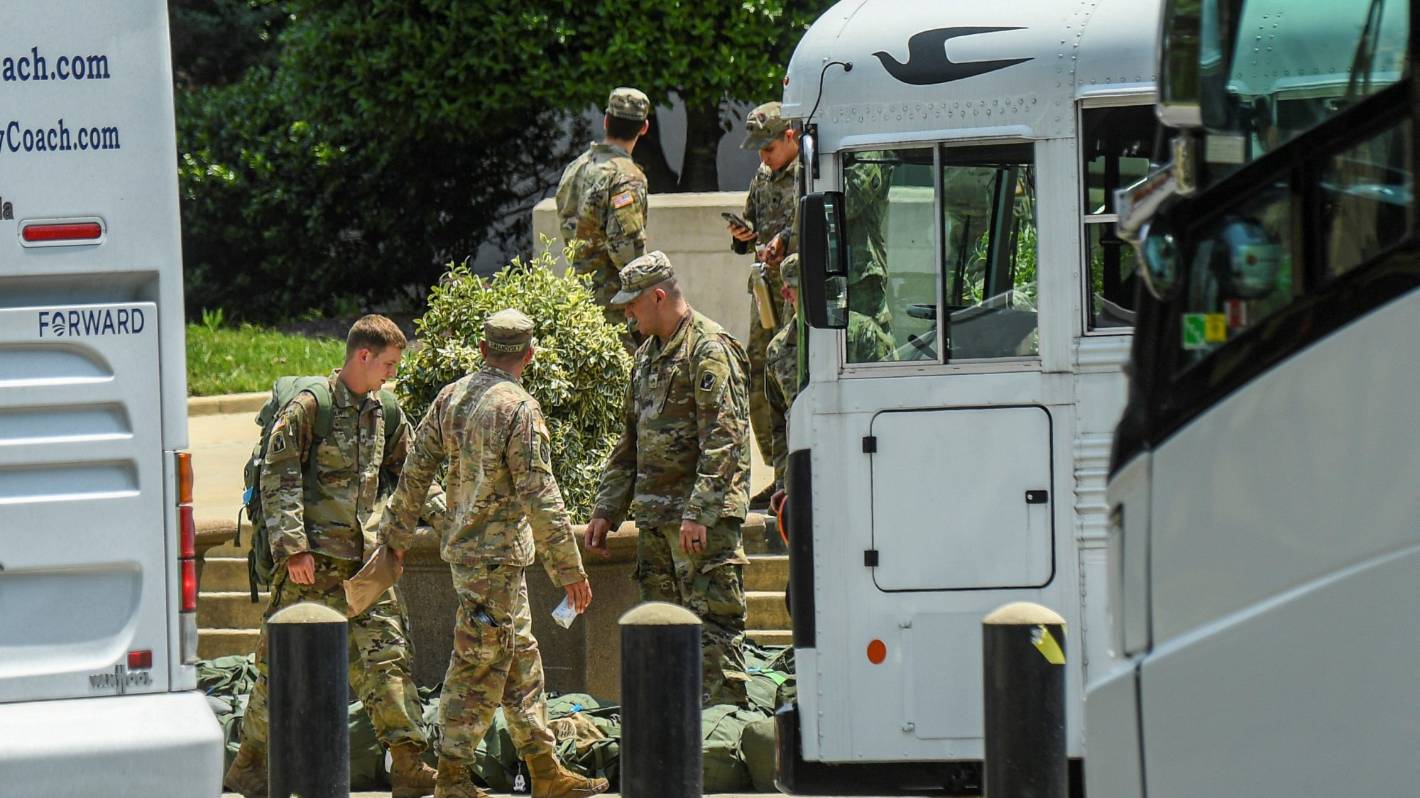 Bracing for possible violence, the nation’s capital has mobilised the National Guard ahead of planned protests by President Donald Trump’s supporters in connection with the congressional vote expected on Wednesday (Thursday NZT) to affirm Joe Biden’s election victory.

Trump’s supporters are planning to rally on Tuesday and Wednesday, seeking to bolster the president’s unproven claims of widespread voter fraud.

“There are people intent on coming to our city armed,” DC Acting Police Chief Robert Contee said on Monday.

A pro-Trump rally in December ended in violence as hundreds of Trump supporters, wearing the signature black and yellow of the Proud Boys faction, sought out confrontations with a collective of local activists attempting to bar them from Black Lives Matter Plaza, an area near the White House.

On Monday, Metropolitan Police Department officers arrested the leader of the Proud Boys, Henry “Enrique” Tarrio, 36, after he arrived in Washington ahead of this week’s protests. Tarrio was accused of burning a Black Lives Matter banner that was torn down from a historic Black church in downtown Washington during the December protests.

A warrant had been issued for Tarrio’s arrest for destruction of property, police said. He was also facing a weapons charges after officers found him with two high-capacity firearm magazines when he was arrested, a police spokesman said.

Trump has repeatedly encouraged this week’s protests and hinted that he may get personally involved. Over the weekend, he retweeted a promotion for the rally with the message, “I will be there. Historic Day!”

The protests coincide with Wednesday’s congressional vote expected to certify the Electoral College results, which Trump continues to dispute,

Election officials from both political parties, governors in key battleground states and Trump’s former attorney general, William Barr, have said there was no widespread fraud in the election. Nearly all the legal challenges from Trump and his allies have been dismissed by judges, including two rejected by the Supreme Court.

During a press conference on Monday, Bowser asked that local area residents stay away from downtown DC, and avoid confrontations with anyone who is “looking for a fight.” But, she warned, “we will not allow people to incite violence, intimidate our residents or cause destruction in our city.”

According to a U.S. defence official, Bowser put in a request on New Year’s Eve to have Guard members on the streets from Tuesday to Thursday to help with the protests. The official said the additional forces will be used for traffic control and other assistance but they will not be armed or wearing body armor. Congress is meeting this week to certify the Electoral College results, and Trump has refused to concede while whipping up support for protests.

Some 340 DC National Guard members will be activated, with about 115 on duty in the streets at any given time, said the defence official, who provided details on condition of anonymity to discuss internal deliberations.

The official said Guard members will be used to set up traffic control points around the city and to stand with district police officers at all the city’s Metro stops. Contee said Guard troops will also be used for some crowd management.

“Some of our intelligence certainly suggests there will be increased crowd sizes,” said Contee.

DC police have posted signs throughout downtown warning that carrying any sort of firearm is illegal and Contee asked area residents to warn authorities of anyone who might be armed.

Because DC does not have a governor, the designated commander of the city’s National Guard is Army Secretary Ryan McCarthy. Any DC requests for Guard deployments have to be approved by him.

The defence official said that there will be no active duty military troops in the city, and the US military will not be providing any aircraft or intelligence. The DC Guard will provide specialised teams that will be prepared to respond to any chemical or biological incident. But the official said there will be no DC Guard members on the National Mall or at the US Capitol.

At previous pro-Trump protests, police have sealed off Black Lives Matter Plaza itself, but the confrontations merely spilled out to the surrounding streets. Contee on Monday said sealing the area again was “a very real possibility” but said that decision would depend on the circumstances.

“We know that historically over the last few demonstrations that BLM plaza has been a focal point,” Contee said. “We want to make sure that that is not an issue.”

On Monday, a stage was being assembled for one of the protests on The Ellipse, just south of the White House.

Organisers plan to rally on Tuesday evening at Freedom Plaza and again all day Wednesday on the Ellipse, including a 1pm Wednesday march to the Capitol.

Expected attendees include high-level Trump supporters like Texas Attorney General Ken Paxton and Republican strategist Roger Stone, a longtime Trump devotee whose three-year prison sentence was commuted by Trump. Stone was convicted of repeatedly lying to Congress during the investigation into Russian interference in the 2016 election.

During the December 12 pro-Trump protests, at least two local Black churches had Black Lives Matter banners torn down and set ablaze. Contee said the hate-crimes investigation into those incidents was still ongoing and that his officers would be out in force around area churches to prevent similar incidents.

“We will be increasing out visibility around the churches in the area,” he said.

On Monday the Lawyers’ Committee for Civil Rights Under the Law filed a lawsuit in DC Superior Court against the Proud Boys and Tarrio on behalf on one of the vandalised churches, Metropolitan African Methodist Episcopal Church.

“We will not allow white supremacist violence to go unchecked by the laws of the land,” Rev William H Lamar IV, pastor of Metropolitan AME, said in a statement.