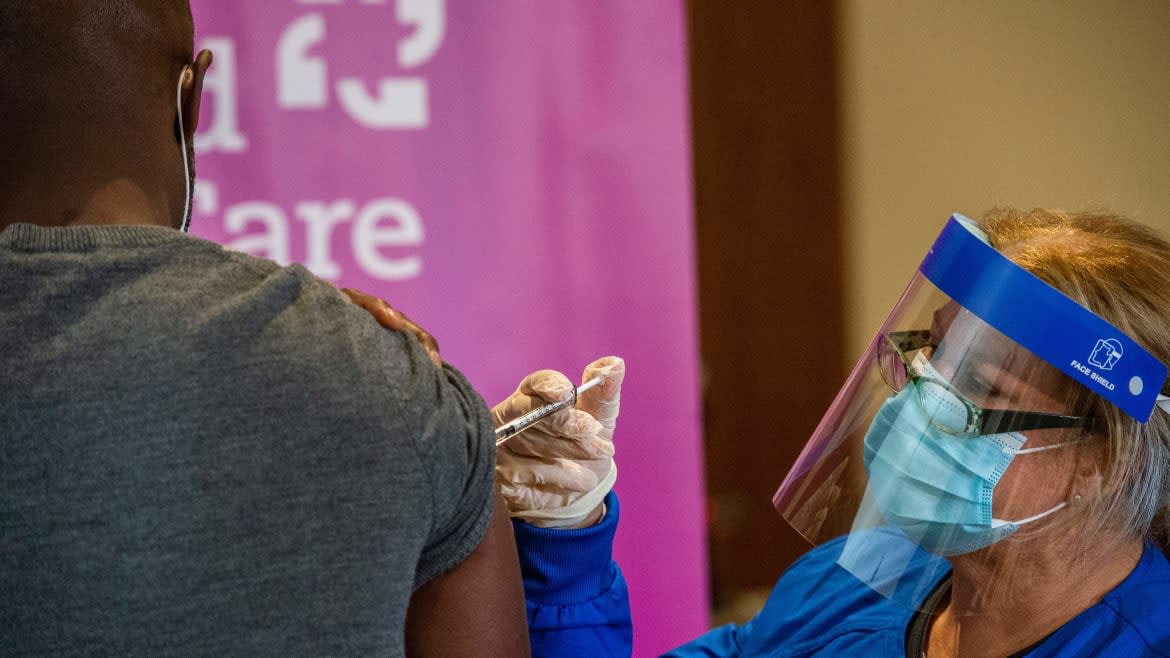 In New York, hospitals have only administered about 46 percent of their coronavirus vaccine doses. Several states away, in Florida, just 260,000 residents had received their first dose of the vaccine as of Sunday—even though there was enough for about 1 million people to get their first shot.

The sluggish rollout, amid skyrocketing cases of the coronavirus, is making state officials across the country mad as hell. Some are even threatening hospitals to administer their doses as soon as possible or face losing them entirely, along with hefty fines.

But if the need for faster vaccinations is clear, experts said the vocal criticism amounted to little more than politicians shifting the blame from themselves back onto overtaxed health-care systems.

“Nationwide, there have been issues with the delivery of the vaccines,” New York Gov. Andrew Cuomo said during a Monday news briefing. “I want needles in arms, and I want it done as quickly as possible. If there are some hospitals that are better at doing that, then they should be doing that.”

Since December, over 15.4 million doses of the Pfizer-BioNTech and Moderna vaccines have been distributed nationwide, according to the Centers for Disease Control and Prevention. But only about 4.6 million people have received their first shots as of Monday afternoon—despite the federal government’s goal that 20 million people would be vaccinated by the end of 2020.

While many factors are contributing to this delay—including the holiday season and the need for more federal funding to support the rollout—DeSantis and Cuomo on Monday put much of the blame directly on hospitals. Lawmakers in Ohio and Texas have also urged hospitals to ramp up their vaccination rates.

“I do not want to see a vaccine sitting around not being used when you could be putting a shot in an arm,” Florida Gov. Ron DeSantis said on Monday. “If you’re not using it, then we’re going to make sure that additional allotments are going to be reduced.”

In adherence to CDC guidelines, most states are currently only vaccinating health-care workers, nursing-home residents, and staff—before they begin administering doses to other essential workers and Americans over the age of 75. But at this rate, the general population won’t even begin to receive access to the vaccine until spring, a troubling timeline given the deadly virus has already killed more than 350,000 Americans and infected about 20 million others.

“We are at a pace right now to deliver vaccines in L.A. over five years, instead of over half a year,” Los Angeles Mayor Eric Garcetti said Sunday on CBS’ Face the Nation.

To make matters worse, while both vaccines can last up to six months frozen, the Pfizer doses are only viable for five days after being thawed. The Moderna vaccine can be kept refrigerated for up to 30 days. Both vaccines require two shots.

On Friday, President Donald Trump blamed the slow rollout of the vaccine on states after his administration’s “successful and very large scale distribution of vaccines.” Surgeon General Jerome Adams on Sunday insisted “this was always going to be the most difficult vaccine rollout in history.”

Lawrence Gostin, director of the O’Neill Institute for National and Global Health Law at Georgetown University, told The Daily Beast on Monday that struggling hospitals shouldn’t bear the brunt of the blame.

“It is the height of hypocrisy to call out under-performing hospitals in their vaccine rollout. The real blame should be placed at the federal and state governments for a disastrous vaccine rollout campaign, poorly planned and anemically funded,” Gostin said. “Hospitals were given short notice on when and how many vaccines they would get, supplies arrived during the holidays when they are short-staffed. Hospital staff got zero training, and received precious few resources.”

“The White House and governors are just passing the buck and avoiding political accountability. The entire campaign has lacked a clear plan backed by resources,” he added.

Britain’s Mutant Coronavirus Strain Has Swamped the Nation, but a Worse Variant Has Already Arrived

On Monday, Cuomo revealed that over the last three weeks, only 300,000 vaccine doses had been administered in New York—less than half of the total number of doses allocated to the state. Meanwhile, New York has become the fourth state to reach a million confirmed COVID-19 cases.

To encourage faster delivery, the governor said that if the supplies are not used within one week of delivery, health-care systems may face fines up to $100,000 and be disqualified from receiving further batches of vaccines.

During a stunning portion of Cuomo’s daily press conference, the Democrat called out hospitals across the state that have distributed the highest and lowest percentage of the COVID-19 vaccines they have already received.

Some of those lowest-performing hospitals include Samaritan Hospital, which has currently administered about 15 percent of its available doses, and A.O. Fox Hospital-Tri-Town Campus, which has only given out about 18 percent. Nassau University Medical Center, Cuomo added, has only distributed 19 percent of its vaccines, and Nuvance Health has only used 24 percent.

The four hospitals did not immediately respond to The Daily Beast’s request for comment.

De Blasio on Monday said the city plans to administer at least 400,000 vaccinations a week at 250 access points. Thus far, the city has only administered around 110,000 doses since it began vaccinating on Dec. 15.

One New York City nurse, who wished to remain anonymous for fear of professional retribution, believes the lack of communication between hospitals and city officials is also a factor in the vaccination delay. She said there’s been confusion in the city about who can get vaccinated and when—turning what should be an organized system “into a sort of a free-for-all.”

“I think the city made sure front-line healthcare workers got the vaccine or are about to get the vaccine,” the nurse said. “But after the ‘top priority list,’ it kind of turns into a larger group that is hard to organize. So far, I haven’t seen any mainstream plan to make sure vaccine hubs can administer doses safely and effectively.”

While Cuomo has demanded hospitals hurry up with vaccinations, the governor has also threatened repercussions for systems that don’t follow the CDC inoculation guidelines. Cuomo’s office did not immediately respond to The Daily Beast’s request for comment.

Dr. Amesh Adalja, a senior scholar at the Johns Hopkins Center for Health Security who specializes in infectious diseases, said the end goal should be to get “as many people vaccinated as possible—even if it’s slightly out of order.”

“Hospitals are trying to adhere to the prioritization scheme set up by the CDC. So it seems counterproductive to penalize hospitals for either adhering to the scheme—and possibly allocating more vaccine doses than needed—or for going outside the state guidelines to make sure all the vaccines are used,” Adalja told The Daily Beast.

Adalja also insisted there are “negative cascading impacts of penalizing hospitals whose main objective is to ensure everyone gets a vaccine.”

“At the end of the day, punishing hospitals who are dealing with a supply chain that might not be perfectly sized just means it will take longer for the general population to get vaccinated,” he added.

In Florida, Republican Gov. Ron DeSantis said he’s just trying to encourage “healthy competition” among hospitals to get the vaccine out fast.

“Hospitals that are not doing a good job of getting the vaccine out” will see supplies redistributed to providers who are effectively administering doses, he said.

The Republican governor’s plea for more vaccinations is remarkable, considering he’s continually downplayed the seriousness of the pandemic by refusing to implement a mask mandate or strict stay-at-home orders. DeSantis has also controversially steered his state to vaccinate senior citizens before essential workers.

The state is uniquely vulnerable to the coronavirus with the combination of a huge elderly population—nearly 400,000 of whom live in nursing homes and other assisted-living facilities—and its current COVID-19 disaster. With a current positivity rate of 8.3 percent, the state has already lost almost 22,000 people and over 1.3 million more have been infected.

According to the CDC, 1.1 million doses have been distributed to Florida so far, enough to vaccinate about 13 percent of the prioritized population of home-care workers, and staff and residents in long-term care facilities. So far, according to the state’s health department, only about 260,665 residents have received their first vaccine dose, meaning about 0.8 percent of the Sunshine State’s population has been vaccinated.

“Hospitals are absolutely committed to efficiently administering the vaccines,” Mayhew said, noting that “the vast majority of the vaccine just arrived within the last week and a half prior to two holidays.”

The state’s department of health declined to comment on which hospitals have been slow to roll out the vaccine, telling The Daily Beast that the plan is “fluid” and will prioritize senior citizens. DeSantis also announced Monday four new actions to increase the vaccination process—including opening additional inoculation sites that will be open seven days a week. DeSantis’ office did not immediately respond to The Daily Beast’s request for comment.