Idiot of the Year Kelly Loeffler darkened a photo of her opponent and spent $40,000 boosting the video 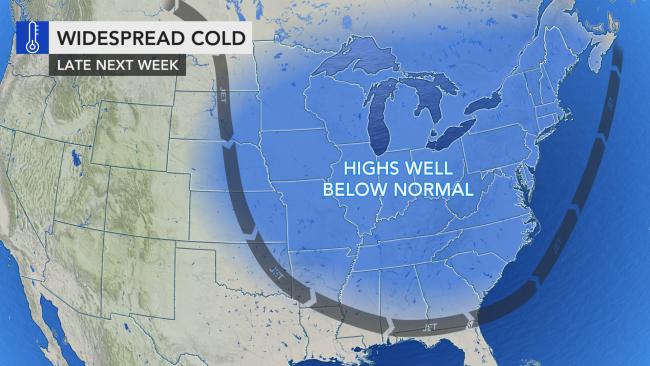 Changes are taking place in the atmosphere above the Arctic Circle that suggest the clock is ticking on the mild weather — for January standards — gripping much of the United States. Forecasters say signs are pointing toward cold air outbreaks that will begin during the third week of January. At the same time, an active storm track is likely to continue in the South and along the East Coast — and the combination could spell more chances for snowfall in the coming weeks.

AccuWeather long-range meteorologists have been keeping tabs on the polar vortex and a high-level part of the atmosphere, known as the stratosphere, for signals on potential Arctic air invasions for several weeks now.

“Just prior to the end of December and ongoing now through Jan. 5, 2021, there has been a surge in temperatures in the stratosphere above the Arctic Circle,” AccuWeather’s Lead Long-Range Meteorologist Paul Pastelok said.

The temperature surge in the layer of the atmosphere, which is located between 6 and 31 miles above the ground, could lead to a weakening of the polar vortex around 10-14 days later, he warned. When this storm near the North Pole that tends to keep Arctic air locked up weakens, it allows frigid air to escape and push southward toward the mid-latitudes such as the U.S.

“The first push of Arctic air seems likely to begin later during the second week to early in the third week of January (11th to 15th) from part of western Canada and the U.S. Rockies,” Pastelok said.

Other weather players could help to direct that bitterly cold air straight into parts of the U.S. “The ongoing active storm track in the southern U.S. will then help to pull the colder air through the Midwest and into the East in the wake of the storms,” Pastelok added.

“After the first surge of Arctic air, there are likely to be additional waves of cold air that spread from the Central states to the Eastern states during the latter part of January and into early February,” Pastelok explained.

How severe the cold will get or where the worst of the cold ends up is likely to be dependent on the amount of snow on the ground. Snow tends to reflect the sun’s energy back out into the atmosphere during the day and allows the temperature to plummet at night under clear and calm conditions. When the ground is relatively bare, it can absorb some of the sun’s energy and cause the lower part of the atmosphere to warm up a bit or take the edge off of Arctic blasts.

As the waves of Arctic air get rolling during the second half of the month, and with the Great Lakes largely free of ice, significant rounds of lake-effect snow are expected to unfold in the snow belts with the risk of snow squalls extending well away from the Great Lakes.

The frequency of storms could determine how low temperatures dip in the Southeastern states during the upcoming pattern. Storms can limit daytime warming and bring the potential for snowfall over inland areas.

Another factor to consider for the magnitude of cold air in the Southeastern states will be western Atlantic and Gulf of Mexico water temperatures.

“On one hand, waters over the western Atlantic are likely to remain above average and may limit the magnitude and duration of cold air along the Eastern Seaboard,” Pastelok explained. “But, on the other hand, Gulf of Mexico waters have cooled and will likely cool off even more during the balance of January and may allow easier access to cold waves.”

The upcoming major pattern change for much of the Central and Eastern states could lead to a dramatic increase in heating costs during the second half of the month that could spill over into February. Americans may notice a hit to their wallets after mild weather led to lower heating usage in December to early January.

Temperature departures have ranged from 3-6 degrees Fahrenheit above average over much of the Plains and Midwest since Dec. 1. It has been mild, but not to the same extent over much of the Southern and Eastern states with temperatures averaging 1-3 degrees above normal. In parts of the Florida Peninsula, temperatures have averaged close to normal to 2 degrees below normal since early December.

The most dramatic nosedive in temperatures is likely to occur across the northern Rockies and to the northern Plains and Midwest, where temperatures could end up swinging from 3-6 degrees above average to that much below average or more.

With a southern storm track forecast to remain active before and after the arrival of Arctic air, there will be the ongoing potential for one or more storms to climb northward along the Atlantic coast, which can result in major winter storms for the mid-Atlantic and New England states.

How far-reaching and potent the storms become may rest on whether the Southern storm track is able to merge or phase with a secondary Northern storm track. Blockbuster winter storms in the East often develop in that manner.

Keep checking back on AccuWeather.com and stay tuned to the AccuWeather Network on DirecTV, Frontier and Verizon Fios.