The Best Pop Culture That Got Us Through 2020 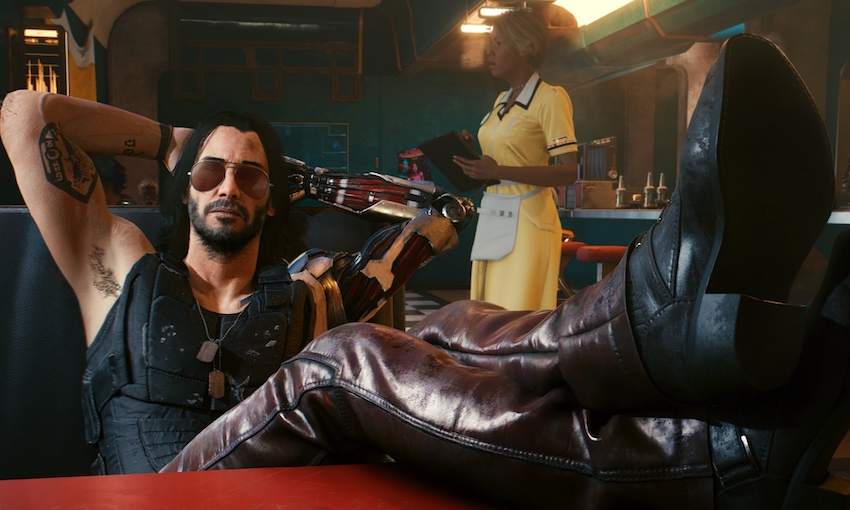 It was all set to be the biggest game of the year, but Cyberpunk 2077’s release has been overshadowed by technical hitches and multiple controversies. Sam Brooks reviews.

Before you talk about actually playing Cyberpunk 2077, there are a myriad of other things you have to talk about first. More internet ink has been spilled about this game ahead of its release than almost any game in history, and it’s impossible to engage with the game without also engaging with the discourse.

Before you talk about playing Cyberpunk 2077, you have to talk about the crunch that was apparently required to get it to release. The game, which has been in development since 2012 by The Witcher 3 developer CD Projekt Red, has been the subject of constant criticism over the past year for forcing their workers to ‘crunch’, an industry term for excessive overtime, and a massive issue in the game industry. Bloomberg reported earlier this year that some staff had been working under crunch for well over a year, despite promises a year earlier that crunch would be ‘non-mandatory’. The game was delayed three times this year alone, after originally being slated to come out on April 30.

Before you talk about playing Cyberpunk 2077, you have to talk about the transphobia in the game’s marketing. Months ago, an image of a trans woman with a comically large penis was used to advertise the game, explicitly courting controversy (although not the kind they wanted). Rather than being a commentary on corporations co-opting queer imagery, it ended up being an example of that very thing, fetishising the image of a trans woman in a way that dehumanises and objectifies her. Along with a few ill-advised tweets co-opting progressive hashtags, this led to a backlash that has unavoidably tainted the game. (I’m sorry to report that the actual integration of queer identities into the game is no better: gender is still tied to what voice your player character has, reinforcing the same gender binary in a very different way. An excellent piece about how the game addresses trans issues was published on Syrup, and I encourage you to read it.)

Before you talk about playing Cyberpunk 2077, you have to talk about the fact that while the game might be finished, it is in no way ‘complete’. Despite it being in development for eight years, with the aforementioned crunch, the game has been released with masses of bugs and glitches, included but not limited to penises appearing outside of clothes, certain textures not appearing at all, and physics issues that leave characters floating aimlessly around the world. The game is so unplayable that CD Projekt Red have offered players who bought it on last generation consoles a full refund, and apologised for not showcasing it on older consoles before release – an unprecedented apology in an industry where people are less likely to take an l than Donald Trump. It is a cruel irony that the most cyberpunk thing about this game is how absolutely broken and messed up the tech is.

And before you talk about playing Cyberpunk 2077, you have to talk about the appropriation of ta moko, a throwaway option in the player character creator, so throwaway that nobody would miss it if it wasn’t there. It’s the most senseless, thoughtless kind of cultural appropriation. If you don’t own it, don’t use it, obviously. But even more crucially, don’t incorporate art and culture that you clearly don’t understand.

Then, if you can get past all that, you can actually talk about the game. If you get past all the glitches, all the crashes, and all the bugs, you might end up seeing something like this.

Cyberpunk 2077, a very loose sequel to tabletop game Cyberpunk 2020, is set in Night City, essentially a tech-dystopia. If you take Blade Runner, and add a layer of grime to it, you’ve got Cyberpunk 2077’s whole vibe and look. Crime is rampant, technology makes monsters out of men, and money is god. You play as V, a player-created cipher, who falls on hard times within the first 15 minutes and spends the rest of the game building themselves into the biggest mercenary in the city. Their partner (of sorts, no spoilers) throughout this is Johnny Silverhands, played by Keanu Reeves, a rockstar-turned-terrorist who can’t help but comment on every goddamned thing that happens.

While The Witcher 3 was a full-on open world RPG, Cyberpunk 2077 hits a direct mid-point between Skyrim and a run-of-the-mill action shooter. It plays more like the former than the latter, with skill trees and conversation choices galore, but the action is surprisingly well integrated. The combat and platforming in many open world RPGs can feel floaty and weightless, as though the action is grafted onto the game to pander to the audience, rather than being a core part of the process. But here, every encounter is its own event, a true fight to death. Provided the game doesn’t crash, that is.

Which it probably will, at least for the first few months. Despite the glitches, Night City is the most immersive open world I’ve ever played in. Nothing feels cookie-cutter here: each mission is designed as its own level, each district has its own distinct design whether it’s Japantown or Heywood, and the characters are vividly designed within those districts. It’s the closest that an open world has felt to being a living, breathing environment.

Cyberpunk 2077 transcends the cinematic feel that a lot of triple-A games seem to aspire to: all perfectly framed shots and predetermined angles. Instead, you’re directly in the head of V, able to do nearly anything within missions to complete them. It’s about as immersive as you can get without putting a clunky VR headset on. You choose where your character looks, what they do, who they shoot, and how they shoot them. This isn’t new – Deus Ex pioneered this a whole 20 years ago – but the sheen that only triple-A development (and apparently crunch) can provide puts Cyberpunk 2077 a whole step above anything else out there.

Put simply: It’s a game that plays like it was worked on every single day of its eight years of development. 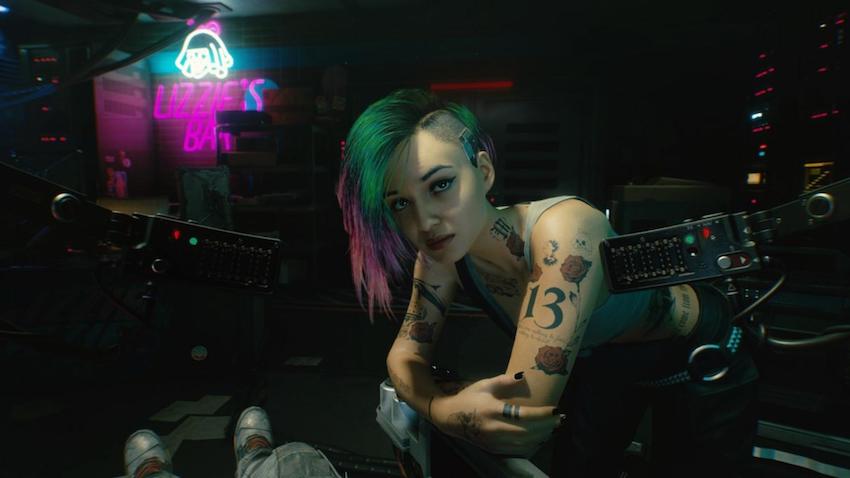 Moments like these, genuinely beautiful, are few and far between, even if you persist to see them.x

Which is why it’s unfortunate that the closest comparison that I can think of for Cyberpunk 2077 is a game that’s nearly 20 years old: Grand Theft Auto: Vice City. That game was essentially a playable Scarface: a parody of and tribute to all the excesses of the 80s – deeply fun, deeply silly and as empty as a baggie at the end of the night. Vice City had charm in spades, because it was so juvenile. Nothing was especially deep, but it was memorable. Cyberpunk 2077 has moments that occasionally take a stab at depth – an ofrenda for one of your character’s closest friends is a delicate scene where everything is pitched just right. You can see the fruits of the development team’s labours here; the performances are melancholy, the lighting is gorgeously moody, and the grief that is draped over the entire sequence never feels overblown. These moments are few and far between though. For the most part, playing Cyberpunk 2077 feels like drinking two energy drinks in a row: great at the time, but when you’re done guzzling you don’t feel especially good about it.

One of Cyberpunk 2077’s biggest issues is the sense that it’s a game flung out of time. This is a game set, as the title suggests, in 2077, in a genre born in the 1980s, and coming out in 2020. Rather than being a prediction about the world 57 years into the future, it ends up as a limited vision of what some dude (original cyberpunk creator Bruce Bethke, specifically) thought was cool 40 years ago. What the game thinks is cool and edgy – for example Johnny Silverhands, a rocker who drinks, smokes and fucks in equal amounts – might’ve been cool in the 80s, but is now anything but. The irony is that by adhering to this regressive imagery, it actually ends up being more of a safe bet: it’s not going to offend anybody, and it’s definitely not going to break any boundaries. It’s more of the same.

What makes the game even less culturally relevant is the fact that its message is so well worn. Yes, technology is taking away our souls, Yes, corporations are bad, and that happens to include corporations that trade in transphobic ideology, drive their workers into the ground, and appropriate culture without understanding it. Maybe it was too much to expect CD Projekt Red to dive too deeply into that.

While the cyberpunk genre might’ve been edgy 40 years ago, time blunts your edge, and there’s nothing here that would intentionally offend anybody who has been playing games for say, the last two decades. Violence, swear words, and nudity aren’t transgressive. They’re part of the cultural norm now, especially in television and gaming. If the game actually wanted to transgress, it would challenge the ideology of its audience, who want the aesthetic of edginess, the performance of it, without ever being truly confronted.

Is Cyberpunk 2077 a great game? No. Could it be? Maybe not. Can art ever be truly great if you have to lower your standards and turn off so many parts of your brain to engage with it properly? The hope was for Cyberpunk 2077 to usher in the new generation of gaming, but what it ends up showing us is how little the artform, or at least the mainstream examples of it, have changed, and how much it desperately needs to.

The reviewer played this game on a PS5 for 30 hours. It crashed 15 times.

The Sunday Essay: Cricket with child