Bosman at 25: Who made the best free transfer? 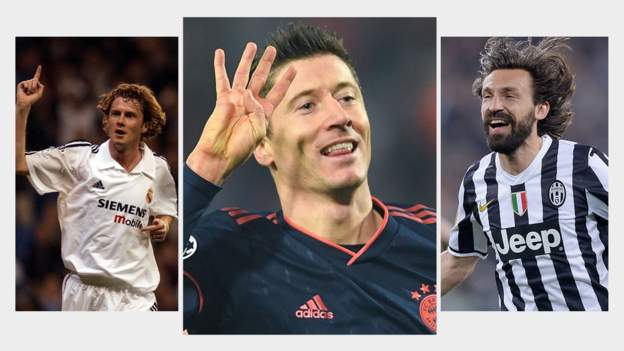 Decent, if unremarkable, as a player. An absolute game-changer as a court case.

It is now 25 years since Jean-Marc Bosman entered the European Court of Justice as a midfielder and emerged as a noun.

He wants a Bosman. The Bosman rule. We’re signing him on a Bosman.

The change in employment law meant footballers could choose to run down their contracts and move clubs on a free transfer. With some caveats.

It changed football hugely. But who have been the best “Bosmans” and had the most success?

Take a look at our list of the best 10 and rank them at the bottom of the page.

Contentious? I’ll say. Tottenham offered their England defender a contract that would have made him the highest-paid player but he rejected it and moved down the road to arch rivals Arsenal.

“It was a big decision,” Campbell said. “I could have earned more money by going abroad but I felt this was the place to be.”

The signs were there, sure. Zlatan Ibrahimovic had long been one of the planet’s best and most expensive strikers. He’d just become the top scorer in PSG’s history despite only arriving at the age of 30.

But there was still more than a whiff of cynicism surrounding the Swede’s move to Old Trafford on a Bosman in the summer of 2016. He was 34, supposedly washed up, past his best. An impact sub at best.

Instead he scored 28 goals in a stellar first campaign. He scored winners at Wembley and was a key part of Jose Mourinho’s early success. He lit up the Premier League in fact, just like he told us all he would.

He has since done similar jobs at LA Galaxy and back with AC Milan, also on free transfers. King of the Bosman?

There can rarely have been better transfer business done in the history of the game. Borussia Dortmund have more reasons than most to curse the court case of 1995.

Robert Lewandowksi was not the first, or last, player to leave the Westfalenstadion for the Allianz Arena without so much as a bean changing hands, but his exit must hurt the most.

Just look at the numbers. Lewandowski has scored 175 goals in 200 Bundesliga games for Bayern. He has won the league six years in a row. He’s won the Champions League and he’ll probably win the Fifa Best award this week.

Gerard Houllier must have raised a few eyebrows when he wanted to bring a 35-year-old McAllister to Anfield from perennial relegation strugglers Coventry. After all, that same summer Liverpool splashed the cash on Nick Barmby, Christian Ziege, and, er, Bernard Diomede (plus Markus Babbel – who was a strong contender for this list – arrived on a Bosman).

But it was Gary Mac who Houllier would call “his most inspirational signing.” With the young legs of Steven Gerrard doing his running, McAllister was left to conduct play and cause havoc with his deadly set-pieces. Remember his goal against Everton from near enough the halfway line? His shootout penalties against Barcelona and against Birmingham? His goal and decisive free-kick in the Uefa Cup final win over Alaves?

A key player in that famous treble season.

Perhaps the first high-profile English player to take advantage of the opportunities Bosman had unwittingly unlocked, McManaman’s move to Madrid was massive news.

The England winger had come close to a £12m switch to Barcelona a few years previously and his contract negotiations were a true saga – but he had always stated his wish to play abroad.

Any doubts about his ability to fit in at the Galacticos were soon put to bed. McManaman scored a superb goal in the Champions League final in 2000 as he became the first English player to win the trophy for a foreign club.

Milner won two Premier League titles with Manchester City but started just 89 of a possible 190 league games before deciding to move across the M62 to another giant club.

Liverpool fans may have wondered what sort of deal they were getting. A cracking one.

Milner played more or less a whole season at left-back under Jurgen Klopp and is still a regular presence in midfield. Versatile, reliable and above all else, quality.

If you are under a certain age the road from the Parc des Princes to the Reebok Stadium may seem a touch far-fetched. But that was very much the genius of Sam Allardyce.

Fernando Hierro, Ivan Campo, Youri Djorkaeff – Big Sam pulled some ludicrous signings out of the bag for Wanderers but none better than Okocha. So good, they named him twice.

What a joyous player he was to watch in full flight. All rabonas, rainbow flicks and crashing long-range free-kicks while wearing a beaming smile. A superb player.

“When Andrea told me that he was joining us, the first thing I thought was: ‘God exists’. A player of his level and ability, not to mention that he was free, I think it was the signing of the century!”

Who are we to argue with Juventus legend Gianluigi Buffon’s verdict?

Pirlo had been frozen out in his final season with Milan and joined Juve as a 32-year-old bit-part player. A cameo option perhaps.

Instead, Pirlo became the fulcrum of Antonio Conte’s side and won the league four years in a row while playing the best football of his career. A magnificent piece of business from the club he now manages.

Gus Poyet was a virtual unknown to most Premier League followers when he signed from Zaragoza but made an immediate impact with his goalscoring exploits from midfield.

Superb in the air and thunderous of volley, the Uruguayan scored twice in an FA Cup semi-final and managed 49 goals in just 145 games before moving into management.

Vialli’s £12m move to Juve in 1992 was a world record. Four years on, Ruud Gullit brought him to London on a Bosman.

In and out of the team under Gullit, Vialli was the surprise choice to replace the Dutchman as boss and swiftly became the youngest manager to win a Uefa competition in the 1998 Cup Winners’ Cup final.

Three major honours as the boss and a more than respectable haul of 40 goals in 88 appearances puts Luca rightfully on this list.

An earlier version of this article incorrectly listed Ruud Gullit as an option. Gullit moved to Chelsea on a free transfer in 1995 – but before the Bosman court case.