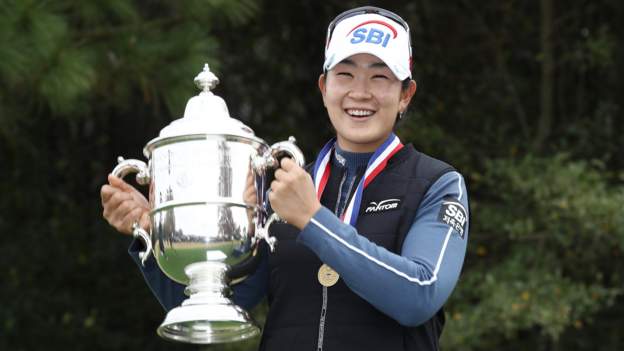 World number 94 A-Lim Kim claimed her first major title with a stunning final round at the US Women’s Open.

Kim, 25, started five strokes behind leader Hinako Shibuno but closed with three straight birdies in a four-under 67 to finish three under overall.

The South Korean was making her US Women’s Open debut in Houston and this is only her third professional victory.

World number one Ko Jin-young and American Amy Olson tied for second, one shot back, with Japan’s Shibuno fourth.

The tournament was completed on Monday after rain forced play to be abandoned on Sunday.

Kim tied the record for the biggest final-round comeback at the US Women’s Open, becoming the seventh player to rally from five strokes down and first since Annika Sorenstam in 1995.

She hit three birdies on the front nine to reach two under but bogeyed the 10th and 11th to slip back as Olson, who started one stroke behind Shibuno, held the outright lead by two shots.

Yet Kim, who wore a face mask while playing, responded with birdies on the 16th and 17th to tie for the lead with Olson, who had five holes left to play at that stage.

Another birdie to finish gave Kim the clubhouse lead, and a bogey at the 16th left Olson, whose father-in-law died suddenly on Saturday, needing two birdies to force a play-off.

She could only make par at the 17th before a closing birdie saw her card a one-over 72 and claim second alongside Ko, who hit four birdies and a bogey in a three-under 68.

Shibuno had led since the second round on Friday but struggled in the conditions, making four bogeys in the first 11 holes to fall back to level par.

There was a further bogey on the 17th, but she also made two birdies on the back nine to card a three-over 74 and finish on one under.

The tournament, which has a $1m winner’s cheque (about £744,000), was scheduled to take place in June but was postponed because of the coronavirus pandemic.

American Kaitlyn Papp finished as the highest-placed amateur, in a tie for ninth on three over.

England’s Charley Hull, who had been in contention after round one, hit a one-over 72 to close on eight over, in a 10-way share of 30th place, including compatriot Bronte Law.

Fellow Englishwoman Jodi Ewart Shadoff finished on 17 over after a final round of 80.

Germany’s Sophia Popov won the Women’s Open, and the Evian Championship was cancelled because of the coronavirus pandemic.