Brexit trade talks: UK and EU to ‘go the extra mile’ in effort to agree deal

The Biden Administration Will Have Its Hands Full With Russia 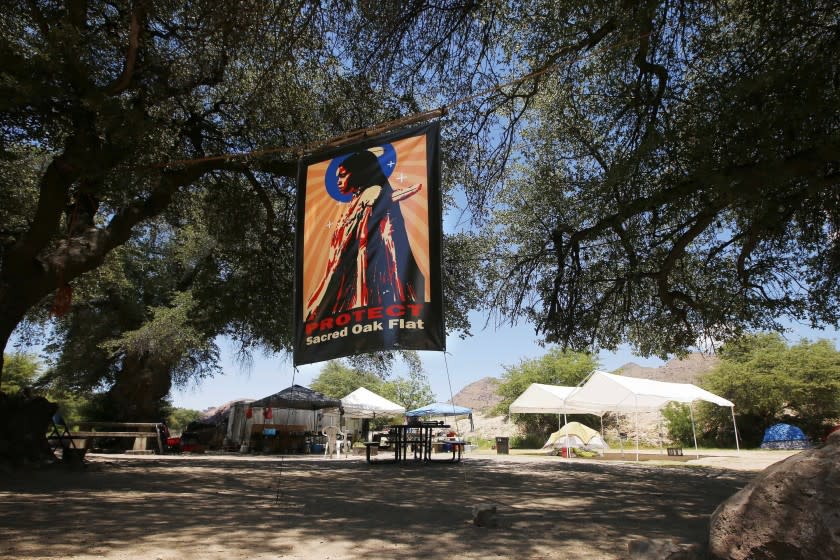 In the spring of 2018, a team of observers trained to catalog native historical sites in the Tonto National Forest visited an area of springs near Oak Flat, about 60 miles east of Phoenix. They were searching for a cluster of petroglyphs. The group reached a small cave, where one of the monitors, an Apache elder, began to pray. As a young monitor later wrote of that experience, “We all had a very deep, personal, powerful connection to a presence we could not see.”

Oak Flat is a lush break in rough desert. “It has everything you need to live,” says Terry Rambler, the chairman of the San Carlos Apache, whose reservation boundary is a few miles from Oak Flat. “It has acorns, water, medicinal plants.”

The area is home to endangered ocelots, and is popular with campers and climbers, who have made it one of the most popular bouldering sites in North America.

For centuries, the tribe has used the area for coming-of-age ceremonies and gathered acorns from the Emory oaks, a traditional food staple. Its spiritual and cultural meaning to the Western Apache is profound. It also sits atop the most valuable copper deposit in North America — an estimated 40 billion pounds of copper worth well over $100 billion at today’s prices.

Today, Resolution Copper Mining, which is owned by Rio Tinto and BHP, two British-Australian companies, is entering what may be final stretch of a decades-long push to gain control of the site.

The plan is to turn this sacred area into a gaping thousand-foot-deep crater that would swallow Oak Flat, according to draft studies. And the Trump administration seems to be trying to help make sure that this is done, as a part of a flurry of business-friendly interventions in the last days of Trump’s presidency.

The saga of Oak Flat shows how none of our public lands can ever be fully safe, when monied interests have such power in our politics. This is federal land, managed by the U.S. Forest Service. It’s listed on the National Register of Historic Places, and contains the “best set of Apache historic sites ever documented,” according to one tribal historian. It has even been specifically protected from mining for more than a half-century, when President Dwight D. Eisenhower, recognizing its natural and historical significance, issued an order withdrawing it from mineral extraction.

But Eisenhower wasn’t anticipating the huge power that money plays in our contemporary politics. Rio Tinto spent years lobbying Congress for a bill that would give Oak Flat to them as private land, a maneuver that would circumvent Eisenhower’s mineral withdrawal.

One of the biggest recipients of Rio Tinto campaign donations in Congress was then-Arizona Sen. John McCain. He partnered with fellow Republican Sen. Jeff Flake — who had himself worked as a lobbyist for a Rio Tinto subsidiary — to attach a last-minute rider to the National Defense Appropriations Act, the “must-pass” military funding bill signed in 2014 by President Obama. The rider had nothing to do with defense appropriations; rather, it created a land-swap process, in which 2,400 acres of land around Oak Flat would be handed over to Resolution Copper, in exchange for 5,400 acres of other land that Rio Tinto owns around Arizona.

By attaching the land swap to an already negotiated defense spending bill, the senators were able to push through a mining use that had already failed in Congress many times. This move threatens to set a precedent by which protected land could be swapped out of public control, with no way to account for its historical and religious significance.

The Trump administration now appears to be rushing to make sure the land gets into Rio Tinto’s hands before the Biden administration takes over. Under the unique wording of McCain’s rider, the transfer of Oak Flat could be set into motion as soon as the Forest Service completes a final environmental impact statement describing potential impacts of the mine. An earlier draft of the EIS described in alarming detail the likelihood that the mine would “directly, adversely, and permanently” impact numerous springs, cultural artifacts and places of “high spiritual and other value.”

The final EIS had been scheduled to be completed by December 2021, giving activists another year to push back against the land transfer. But in October, the San Carlos Apache were surprised to learn that the Forest Service had suddenly changed course, and announced that the report could be released as early as this month. The law mandates that the Oak Flat land be handed over no later than 60 days after the EIS is released: The transfer could be finalized “the same day the EIS comes out,” Randy Serraglio, who has been monitoring the situation for the Center for Biological Diversity, told me.

The Forest Service refused to comment on whether the agency had been pressured to speed up the release of the report. But local employees of the Tonto National Forest recently said that “we are getting pressure from the highest level at the Department of Agriculture,” the department that oversees the Forest Service, according to notes of a meeting reported by the Guardian.

The threat to Oak Flat fits a pattern of last-minute efforts by the Trump administration to give favors to the companies that have spent decades buying influence in Washington — from a push to sell off drilling rights in the Arctic National Wildlife Refuge to allowing new gas drilling in the area around New Mexico’s Chaco Canyon, one of the most important Indigenous spiritual and historical sites in the country. They show how the power of corporate lobbying in Washington can threaten even places that have been protected from development for generations.

Oak Flat can still be preserved by legislation or litigation. But it will be much harder to save if the Trump administration is allowed to rush the process of handing over title to the land to Rio Tinto. “They want to get this land in their hands as soon as possible,” Serraglio says. “Because when they own it, it’s a different story.”

James Pogue, a journalist, is the author of “Chosen Country: A Rebellion in the West.”