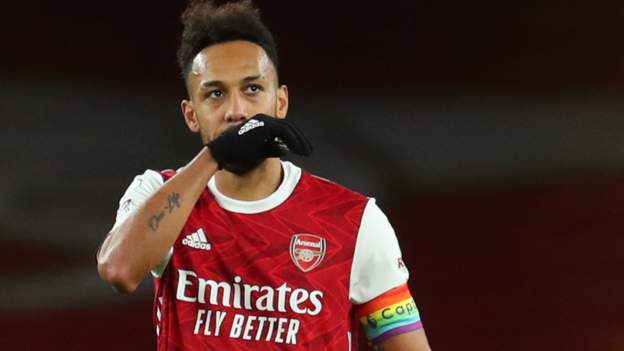 Granit Xhaka was sent off for violent conduct as a desperately poor Arsenal side were stunned at home by Premier League strugglers Burnley.

Gunners skipper Pierre-Emerick Aubameyang’s wretched run of form continued as he failed to score at the right end – and headed an own goal at the other end.

Burnley’s winner came after Xhaka was dismissed on 58 minutes for grabbing the throat of Clarets midfielder Ashley Westwood – the Swiss midfielder given a red card after referee David Coote reviewed the incident on the pitch-side monitor.

The Gunners had plenty of attempts at goal but most of them were dealt with comfortably by Nick Pope, a superb reflex save to keep out Alexandre Lacazette’s low strike aside.

Burnley’s victory lifts them out of the relegation zone, a point clear of Fulham, while Arsenal stay in a lowly 15th place.

Arteta will celebrate one year in charge of Arsenal on 26 December and his reign looked full of optimism when he led the club to FA Cup success last season.

Although they have reached the Europa League knockout stages this term, Arsenal’s league form has been woeful both at home and away – they have lost seven of their past 10 games overall – and questions will soon be asked of Arteta’s capabilities.

There were 2,000 supporters in attendance at a subdued Emirates Stadium and those watching will have been less than pleased at their side’s showing, while it was all too much for one supporter who covered his eyes with his face mask.

Arsenal’s profligacy in front of goal has now seen them go 12 hours and 32 top-flight minutes without finding the net from open play.

Mesut Ozil has been banished from the first team, but they badly lack a player of his quality, someone who possesses the cutting edge to create chances in the final third.

Of their openings, Kieran Tierney had a drive smothered by the inspired Pope, while Bukayo Saka’s strike was straight at the England international goalkeeper.

Lacazette had his side’s best chance in the opening period but the Frenchman now has just a solitary goal in his last 11 appearances, while Aubameyang – whose own goal settled the game – has scored only twice in the past 12 games.

They felt flat once Xhaka was shown a red card – the Switzerland international was initially given a yellow card for a trip on Dwight McNeil but lost his cool when Westwood came in to remonstrate.

This was just Burnley’s second league win of the season, moving them out of the bottom three in the process, and it came via an assured rear-guard performance and a large chunk of fortune.

The solid central defensive partnership of Ben Mee and James Tarkowski contributed a combined 15 clearances and four blocks, and they also regained possession eight times, while behind them Pope further highlighted his credentials with a well-deserved clean sheet.

When Chris Wood headed wide from eight yards out while unmarked in the first half, it looked like the visitors were going to badly rue that missed opportunity.

Aubameyang’s header into his own net did the job for them – but it was just their sixth goal in 12 games this season and they have managed only 29 shots on target all campaign, the lowest in the division.

Skipper Mee tested Bernd Leno from range and substitute Matej Vydra had an attempt late on, but although they could not add to their tally, the solitary goal enabled Clarets boss Sean Dyche to pick up his first victory over Arsenal in 11 attempts.