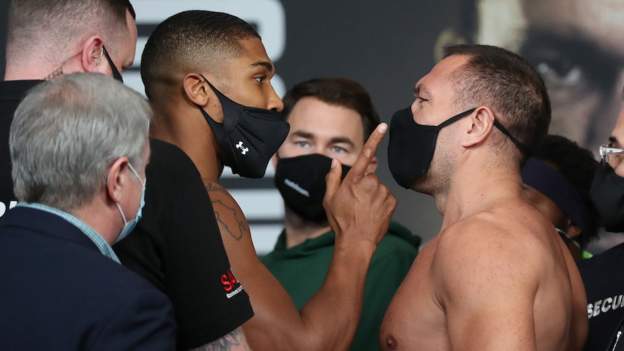 Anthony Joshua warned Kubrat Pulev he will face a “real one” in Saturday’s world title fight as the pair exchanged heated words at Friday’s weigh-in.

The pair stood face to face – Pulev shouting, and Joshua waving his finger – with security keen to intervene.

“I would have just clapped him in his jaw there and then, but I have to wait until tomorrow,” Joshua, 31, said.

Speaking to Sky Sports, the British boxer said he could not repeat what he said to Pulev on television, adding: “Many years I’ve been in boxing and seen a lot fighters talk a lot of rubbish, then they get smacked up.

“I know what he’s like, I have studied him. He thinks he’s a warrior. I said ‘don’t let the guys you’ve fought gas you up, you’re in with a real one now’.

“When people come in the ring with me they are confident and then after a few rounds their soul gets destroyed. When I see that I can take them out.”

Pulev, who will challenge for Joshua’s IBF, WBA and WBO world titles, said: “I told him I respect him so much but I’m a better boxer and tomorrow I’ll show him.

“I think he didn’t like that. But times change, no-one can stay the same. He is world champion now, the last day for him. I don’t hate him, I tell him I respect him. But I have so much energy, I’m so powerful and I’m hungry.”

Joshua knows a win could pave the way for a bout with fellow Briton Tyson Fury, where all four world heavyweight titles could be contested for the first time in history.

Around 1,000 fans will watch his fight with Pulev at Wembley Arena, where BBC Radio 5 Live will be at ringside to provide full commentary.

‘Within where Joshua wanted to go’

I can’t count how many people came up to me asking what I thought about what happened. It was all very heated.

A low-key weigh-in and then it all explodes on the stage when Joshua and Pulev turn up.

Pulev was saying “I have great respect for you but tomorrow I’m going to finish you” and Joshua responded in kind. He felt he had to respond.

I spoke to Eddie Hearn afterwards and he said Joshua was not rattled. There was a really cold stare as he looked at those interviewing him afterwards. I think it was all within the bounds of where Joshua wanted it to go.

This has given this whole event a charge and it was in no way stage managed.