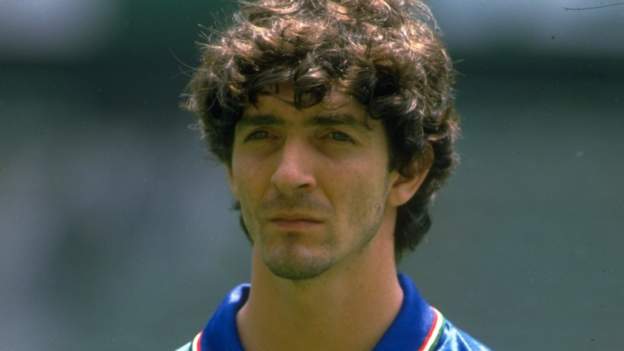 Rossi became a household name across the world after leading the Azzurri to victory at the tournament in Spain, finishing as top scorer and being named best player.

After becoming a prolific scorer for Vicenza, he earned a move to Juventus and later played for AC Milan.

His death was announced on Thursday, following what Italian media report had been a long illness.

Rossi’s wife Federica Cappelletti posted a picture of them together on social media with the words “Per sempre” (“forever”).

She did not disclose the cause of his death.

Rossi wrote his name into footballing folklore with his displays at the 1982 World Cup – although he nearly missed the competition after being implicated in a match-fixing scandal.

Although Rossi maintained his innocence, he was banned from football for three years after being accused of taking part in the 1980 Totonero scandal.

This suspension was reduced to two years on appeal, meaning he was available to play at the World Cup in Spain.

Rossi later described going on to win the tournament as a “personal redemption”.

The tournament started with a whimper for both Italy and Rossi. The Juventus striker failed to score in the opening group stage as Italy drew all three games to scrape through.

The Italians looked far from World Cup contenders – until Rossi, whose performances had come under criticism, found his sharpness in front of goal in the crucial meeting with Brazil in the second group stage.

Rossi scored a hat-trick as Italy won 3-2 to reach the semi-finals, then scored both goals against Poland as Italy set up a meeting with West Germany in the final.

A tense final swung Italy’s way when Rossi scored the opening goal in the second half, the Azzurri going on to win 3-1 and become world champions for a third time.

“On one hand I felt fulfilled. I said to myself, ‘you’ve made it’,” Rossi later said about the triumph.

“On the other hand, I was disappointed that all of this just ended. The World Cup was over.

“[But] when you win something important it’s not just about the trophy. It’s about the group you win it with, it’s about your entire career that took you there.”