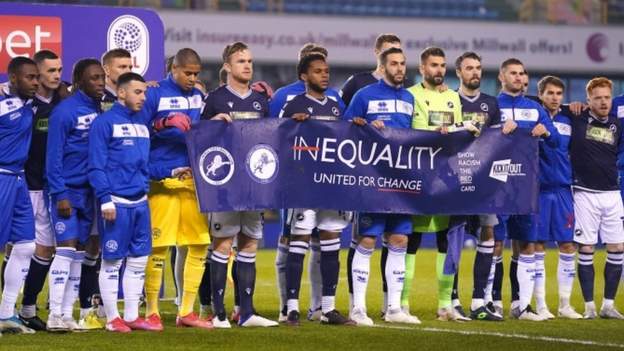 Millwall fans applauded as their team and QPR players came together to hold an anti-racism banner before Tuesday’s Championship match at The Den, days after booing them for taking a knee.

Players were booed as they took a knee before Saturday’s defeat by Derby.

Millwall players did not take a knee before kick-off on Tuesday but QPR players did, despite stopping the gesture earlier this season.

Millwall said it was “one of the most important days in the club’s history”.

In a letter handed to fans in attendance, they added: “The eyes of the world are on this football club tonight – your club – and they want us to fail.

“Together as one, we will not let that happen.”

Millwall defender Mahlon Romeo, who said Saturday’s booing had “personally disrespected” and “offended” him, led the team out in front of captain Alex Pearce.

Players from both clubs stood arm-in-arm behind a banner with the same ‘Inequality. United for change’ message displayed on the big screen at The Den.

Millwall’s regular shirt sponsor has been replaced with the logo of anti-discrimination body Kick It Out.

The decision to hold up the banner came after a meeting on Monday between both clubs, Kick It Out, Show Racism The Red Card, the Professional Footballers’ Association, the Football Association and the English Football League (EFL).

Players, officials and staff at Premier League and EFL games have been taking a knee pre-match since football restarted in June in order to show their support for the Black Lives Matter movement for racial equality.