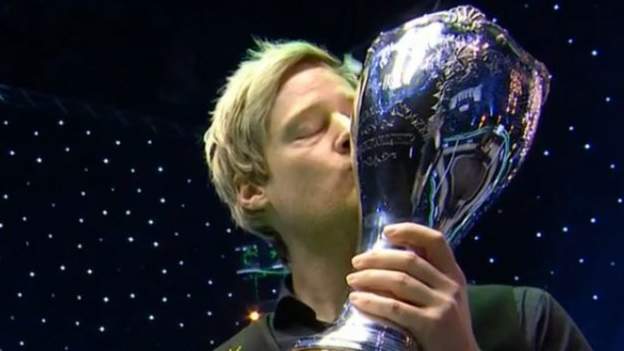 Neil Robertson edged past world number one Judd Trump 10-9 to win his third UK Championship in what was an unforgettably epic late night final.

An electrifying showpiece full of high breaks and impeccable cueball control was anticipated, but it developed into a tactical dogfight between the pair.

They shared three centuries in four frames for 4-4 and there was no more than one frame between them throughout.

Robertson forced a decider, winning it after a battle of more than an hour.

The Australian collects the trophy and £200,000 in prize money at the Marshall Arena in Milton Keynes, where the first UK Championship took place behind closed doors without any spectators in attendance.

Fans watching at home will have expected two of this season’s in-form players to put on a free-flowing spectacle but neither were anywhere near their pinnacle and ended up slugging it out into early Monday morning at 00:55 GMT.

Robertson, snooker’s most successful overseas player, had been beaten in two finals this year, including the Champion of Champions, but gained revenge over Trump for beating him at the English Open in October.

That match went to a final-frame decider and this marathon of a contest went all the way too, as he nicked the final pink in the 19th frame after Trump’s inexplicable miss into the corner.

Robertson fell short in two previous drawn-out frames in the match, but took the one which mattered the most.

The world number three took his career total to 19 ranking title triumphs, drawing him level with opponent Trump in joint-sixth place on the all-time list.

Robertson displayed his prowess by taking apart three-time world champion Selby in the quarter-finals and showcased another breaking-building masterclass against Zhou Yuelong in the semis.

It was nip and tuck throughout the final, Robertson getting bogged down with muddled shot selections at times, but he kept himself together tremendously well in the closing stages.

He made three centuries to take his tally to 13 for the tournament, a new record at the UK Championship – surpassing the 12 compiled by Stephen Hendry in 1994 and Ronnie O’Sullivan in 2003.

Since the start of last season, Bristol’s Trump has been a class apart, claiming a record six ranking titles last term and a further two from four finals this year.

The 2019 world champion has always been a proficient potter, as well as being armed with a first-class tactical game and exceptional temperament, but uncharacteristically came up short in the latter stages.

Defeated ended his 14-match winning streak, which stretched back to the semi-finals of the Champion of Champions on 7 November, and he must wait to became only the sixth player in history to win 20 or more ranking titles.

Trump was far from his destructive best for much of this tournament, including the final, and could not find a way to cross the winning line on this occasion.

He is scheduled to return to action later on Monday evening in the Scottish Open, though he may request to start his campaign the following day.