Review: The Modern Māori Quartet is a celebration of the magic of a crowd 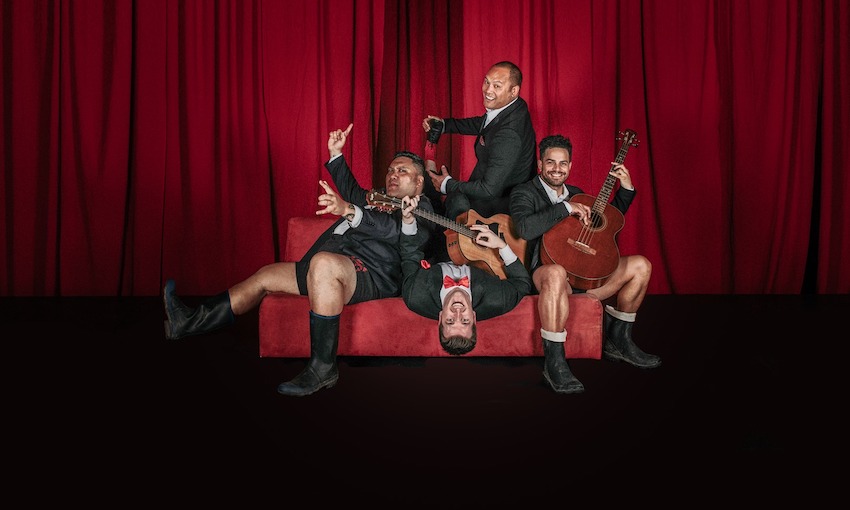 There are many lessons to learn from 2020, but if there’s one I hope sticks, it’s the lesson to not to take shit for granted. Seize the day, seize the minute, seize the second, and use it for all it’s worth. One thing that I definitely took for granted before was live performance: the ability to hang out in a space with a few mates, have a drink or three, and share collectively in an experience with loved ones, enemies and strangers. When we came out of lockdown the first time, I resolved to go to any event I could. Whether it was a gig, a panel, a show – hell, even an opera – I wanted to soak it all in.

Garage Party, the new show from the locally made and internationally acclaimed Modern Māori Quartet, feels like the best justification for not taking live performance for granted. It conjures up the spirit of having a piss-up with some of your more talented friends, riffing on songs everybody knows into the wee hours of the night. It takes all of the joy of that kind of spontaneous hang out, but it turns the class and the talent factor right up. The Civic’s Wintergarden is fancier than your garage, and the Modern Māori Quartet are better performers than your mates. (And absolutely better dressed: these dudes rock suits like they invented them.)

If you’re unfamiliar with the Modern Māori Quartet, you’ve been missing out. The core quartet consists of James Tito, Maaka Pohatu, Matariki Whatarau and Francis Kora, but Tito sits this gig out, with Tom Knowles stepping in as the token Pākehā. The quartet are both a twist on and a tribute to the Māori showbands of old: the Hi-Marks, the Māori Hi-Five and, of course, The Howard Morrison Quartet. While the bulk of the show are tunes from across the world and across the decades, it’s fleshed out by a fair amount of banter, chill skits and charisma-plus charm. When you go see the Modern Māori Quartet, you’re not just going to a gig. You’re going to a good, old-fashioned show. 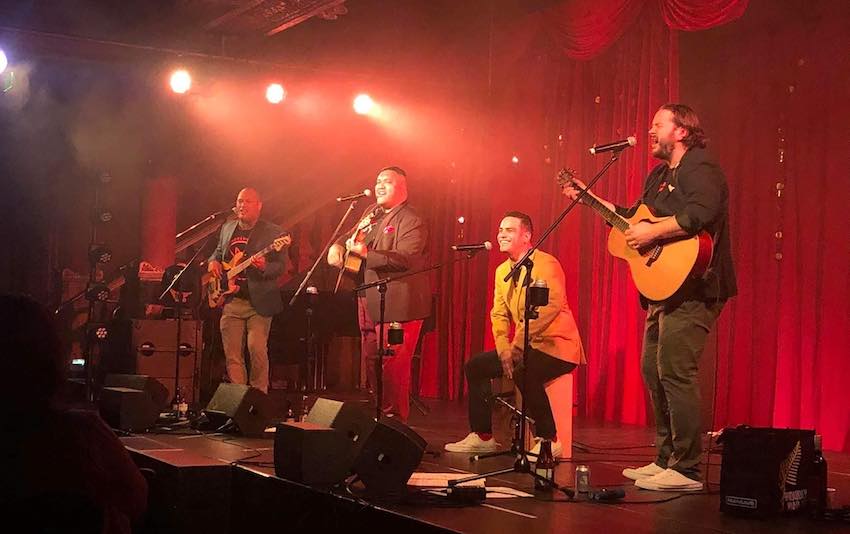 Including a token Pākehā in the show is a stroke of genius. It allows the band to sit fully within the showband persona, while also indulging in some good-natured white-dude mockery. We all know that guy who can clear out a party simply by looking at a guitar sideways, and having that guy on stage to poke fun at makes for a reliable punchline. Knowles plays the hapless role well, but also more than holds his own as a musician. He’s the butt of the joke when the comedy needs him to be, but then seamlessly falls back in tune when the musical performance demands it.

Garage Party splits the difference between the joyful chaos of, well, a garage piss-up, and the polish that’s inherent to every Modern Māori Quartet show. Even if the performance can feel a bit ramshackle at times, it’s more than made up for by their pure charisma and the fact that they’re so good at making a song soar. Anybody can put a half decent cover of ‘Slipping Away’ together, but not anybody can smash ‘I Wanna Dance with Somebody’, ‘Girls Just Wanna Have Fun’ and ‘Total Eclipse of the Heart’ into a medley that gets the Wintergarden absolutely shaking. You need the talent, and you need the range. The Modern Māori Quartet have both.

It feels right to end 2020 with a show like Garage Party. It’s the most trite thing to state, and restate, but we’re lucky to see live performance in New Zealand at all. In a normal year I’d probably see about 50 live shows. This year I’ll barely crack 10. Across the world, audiences aren’t sharing space with performers, but watching them on screens, and on screens within screens. That we get to see live performance at all is a blessing. That we get to see people as talented as the Modern Māori Quartet perform is a near miracle.

The Modern Māori Quartet: Garage Party is at the Wintergarden at The Civic, Auckland, through to December 20. You can book tickets here.