Do Diverse Corporate Boards Lead to a Fairer Workplace? David Fincher marks his feature film Netflix debut with Mank, a biopic about the man who may or may not have written the bulk of Citizen Kane, and it’s his loosest effort yet, writes Christopher Smol.

Can one word explain a whole life? Citizen Kane is structured around that question, and the answer is “not really”. Lives are fragments, lots of little details. The best you can do is line a few consistent bits up together.

The year is 1941: screenwriter Herman J. Mankiewicz, leg broken and prospects fading, posts up at North Verde Ranch for 90 days to crank out an uncredited draft for director-star Orson Welles. That’s the premise of David Fincher’s Mank, which arrives on Netflix today after a short run in cinemas. Here, the writing of Citizen Kane is intercut with scenes from the preceding decade, in which Mankiewicz manages, through sharp quips and facetious contrarianism, to endear himself to and then alienate himself from the Hollywood elite. What he’s blinded to is the way in which time at their table corrodes his soul. The head of that table is the man who inspired Kane – newspaper mogul and fake news pioneer William Randolph Hearst.

Mankiewicz was the New Yorker’s first staff drama critic, a celebrated wit, and a reasonably mediocre, or at least disinterested, studio screenwriter. He was also an alcoholic and a compulsive gambler, perpetually indebted despite his lavish salary.

There’s an alternate version of this story that gets the generic Hollywood biopic treatment, another obsessive male director’s indulgent tribute to an equally dysfunctional forebear. Occasionally that movie pokes through the surface of Mank, reaching into the Mankiewicz book of quotations every 15 minutes for another famous quip or historical cameo. At one point the action grinds to a halt to air a hagiographic detail which, while based in truth, is so noble that its offhanded mention risks flattening the whole movie. In that version of the film, Mankiewicz is simply another great if greatly flawed white man, fiddling at the margins of history, undervalued in his time but now afforded a focus denied to the women in his orbit because his work endures. 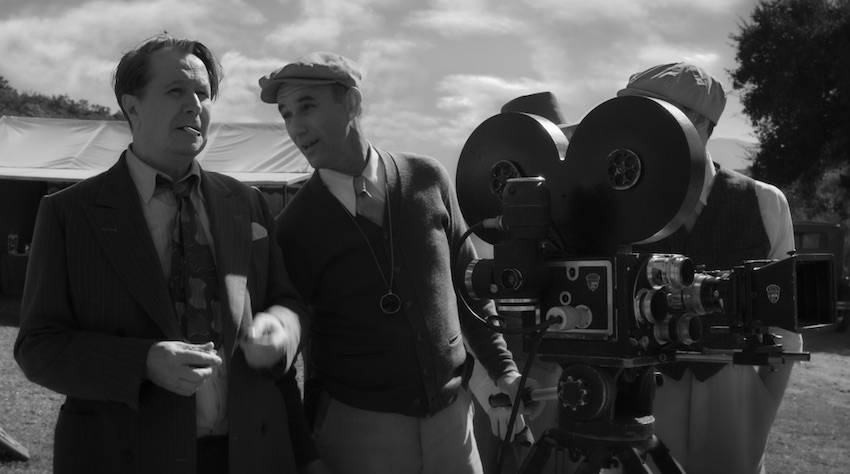 Thankfully, Fincher isn’t fussy about where he sources his plot. Details are fudged, or excised, or stolen from others’ biographies. This is a movie about a particular time and place, shaped for insight rather than accuracy. It’s a moment when giant media apparatuses were weaponised against the public interest, and CEOs gaslit employees into voluntary paycuts. Mank makes a remarkably trim vessel for Fincher’s surprisingly nuanced project. At its best, the film is hyper-specific and jarringly resonant, tackling what it means to politically exist in a society – how irony is not the same as distance, and breaking bread with the elite can be a form of complicity. Gradually, it morphs into a study of the awkwardness of growing apart from the environment where you’ve put down roots. As Mankiewicz, Gary Oldman is unusually subtle, gliding between levels of intoxication as his face and Fincher’s camera imply Mank’s growing awareness of the real role he plays: he’s an Ivy League jester to his patrons, speaking truth to power with enough of a drunken slur for the power to laugh it off.

That realisation leads to Citizen Kane, but it’s a messy, complicated path. Writing a screenplay might embarrass a mogul, but it’s hard to see it changing the world, particularly if said mogul is already sliding out of relevance. If the world really is ruled by a few preening elites, threatening to tar their legacies could have an impact. But each time some dogsbody tells Mank he’s in trouble, Fincher pushes in on Oldman’s face, and each time his groggy eyes light up. Perhaps Citizen Kane is an act of political courage, or an attempt to cleanse himself of the swamp by torching the bridge back. Perhaps it’s an attempt to reframe the breakup on more favourable terms, another dodgy gamble, or playing contrarian for contrarian’s sake.

Freed by Netflix from the need to sell tickets, Fincher styles the film like a 1940s drama. It’s new ground for a filmmaker whose perfectionist technique usually feels distinctly modern: clean camera movements and chilly tones, built for sharp edits and sustained tension. Every image in Mank has been endlessly (digitally) fussed over, but it still seems woozy by comparison, spacious and playful. He shoots in black and white, mimicking Welles’ own devotion to harsh light and heavy greys, deep focus and jarring angles. The soundtrack is mixed in period-accurate mono, meaning it sounds the same coming from an earbud as a surround system. It’s great fun, but somewhat self-impressed: cutesy cigarette burns (which used to signal reel changes on actual projectors) just exacerbate the strangeness of rendering a bygone celluloid world on this most digital of platforms (in widescreen, no less), and typewritten text introducing each and every flashback reads as clumsy problem-solving. The flashbacks are a Mankiewicz signature, an ahead-of-its time, disruptive technique. People are best assessed in aggregate, over decades, and movies are only sculpted from moments. A person might be fragile, noble, lazy, wise – but they’re rarely all at once. Even the screenplay, by Jack Fincher (David’s dad), seems unstable, drafted to reflect Pauline Kael’s long-discredited thesis that Welles’ input into Citizen Kane’s script was minimal. The rewriting process apparently excised most outright falsehoods, but it’s not clear how the fundamental structure shifted. But that feels Fincherian too. There are shades of Fincher’s Zodiac, a procedural which is really a series of attempts to render a historical mood. “This is how it was/this is how it is”, Mank suggests, only to pause, shift angles and admit “well not really” or “there’s more than just that” – some new piece of evidence, some inconsistent detail.

That critical, revisionist streak is humanised when Fincher pauses to make space for one of those details. Amanda Seyfried plays Marion Davies, by contemporary accounts a good comedic actor and gregarious host whose career was both financed and hamstrung by her off-screen role as Hearst’s mistress. Citizen Kane’s cruellest legacy is Susan Alexander, the shopgirl Kane falls for and ultimately forces into a humiliating opera career. Welles spent the rest of his life apologising for how his movie overrode the public narrative of Davies’ life, whereas Mank (the character) disclaims any responsibility. Alexander is a supporting character, invented to reflect something about Kane, not Davies. What Seyfried and Fincher do is revivify the woman under that roman-á-clef, finding (or inventing) a dimensionality Kane elides. Seyfried as Davies is smart, funny, conscious that her stardom and relationships require sacrifices and careful in how she manages them. She seems to exist for her own sake.

She and Mank share the film’s best scene. An indiscrete comment at film mogul Louis B. Mayer’s birthday sees Davies flee the room. Given permission by his wife (known about town as “poor Sara” on account of his gambling), Mank follows to console her. They take a languorous stroll around the garden, fellow travellers chatting through the muddles of their lives. It’s a gentle inversion of an Orson Welles staple: the party joined late and growing later, as energy fades, mirth curdles, and old wounds start to ache again. Fincher trusts in Oldman and Seyfried’s rapport as the scene gradually unravels, and it breaks through the archness of the style, the obscurity of the subject matter. Mank is Fincher’s loosest movie, his least hooky, but their warmth glows out of the past.

In Zodiac, the leads go cold but the investigators can’t drop the case. One becomes a drunk, one misplaces his family, both lose their jobs. In the Social Network, Mark Zuckerberg grows a side-project into a world-eating force, but sheds his only friendship. Benjamin Button pines 20 years for a woman he let slip, then drifts away once his child is born. Mank is the latest entry in Fincher’s series, another man who grasped for purchase on the world but missed the way history, industry, family were sliding around under him, until he wound up awfully far away from who he ought to have been. Or as he wrote it, in one of the few quotes Fincher doesn’t shoehorn in:

“I don’t know how it is that you start working at something you don’t like, and before you know it you’re an old man.”

Mank is streaming on Netflix now. Rawiri Paratene is a proud paka