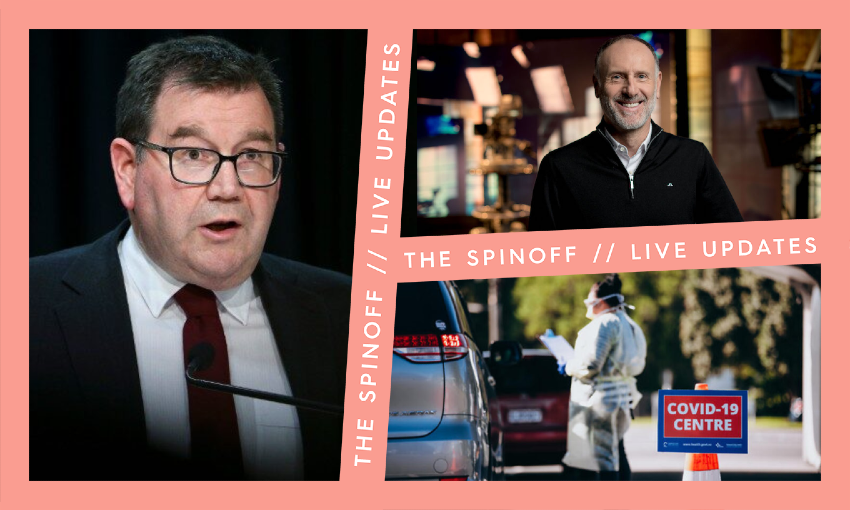 Welcome to The Spinoff’s live updates for December 1. Get in touch at stewart@thespinoff.co.nz

12.15pm: Pill testing to be legal at summer festivals

The government is rushing through legislation before Christmas to allow for pill testing at festivals this summer. The move follows a campaign promise from Labour to allow for the testing, which is currently illegal.

The new law is a short-term fix that makes it legal for someone to handle drugs for a few minutes for the sole reason of testing them. The drugs themselves remain illegal. The government is going to start consultations next year to figure out a long-term solution to allow for the testing.

“This law change today provides these services with narrow and time limited protection this summer against prosecution for short term possession of illegal drugs while they test them,” health minister Andrew Little said in a statement.

Part of what’s called harm reduction, the idea is that allowing for the testing helps ensure that young New Zealanders are using drugs that aren’t laced with harmful, life-threatening additives.

Act has said it’ll support the legislation because it balances keeping the drugs illegal with the public health objective of limiting harm.

We’re stoked to see urgent law changes that will legalise drug checking services before the summer festival season. This will reduce harm from drugs and save lives. Thank you for all your mahi on this @_chloeswarbrick 💚#nzpol pic.twitter.com/b4ublh6468

A follow-up to the 10.25am update on a doctored photo posted by a Chinese foreign ministry spokesperson on Twitter.

Our own government has confirmed it officially registered its concern over the fake picture, which appeared to show an Australian soldier holding a knife to the throat of an Afghan child.

Jacinda Ardern said while she has not spoken directly to Australian PM Scott Morrison, she was concerned by the image.

“That is something that we have raised directly in the manner that New Zealand does when we have such concerns,” Ardern said.

“We will speak up on issues that we have concerns about, we will stick to our independent foreign policy, but that doesn’t stop us observing what is happening with others.”

11.10am: Local music dominates charts for first time in 16 years

For the first time since 2004 – when Ben Lummis (yes) and Brooke Fraser were all the talk – New Zealand music is top of both the annual singles chart and albums chart.

L.A.B.’s In The Air was the biggest song of the year, ahead of the Weeknd’s Blinding Lights. On the album charts, Six60 dethroned Billie Eilish, with their most recent album the biggest seller of 2020.

As an aside, the top New Zealand albums of 2020 list threw me a bit – what ever happened to naming albums?

10.25am: Australian PM told to slap himself in the face by Chinese media

A spat between China and Australia is continuing to heat up. Australia’s PM Scott Morrison has been told to “slap himself in the face” and accused of arrogance, after he asked for a doctored image on Twitter to be removed.

The photo showed an Australian soldier holding a knife to the throat of a young child holding a lamb, accompanied with the caption: “Don’t be afraid, we are coming to bring you peace”.

As news.com.au reports, Morrison reacted swiftly to the image being shared on social media, calling it “truly repugnant”and asking for an apology from the Chinese government.

In response, the editor of China’s state-run English language newspaper, Hu Xijin, called Morrison “ridiculously arrogant” and said he should “slap himself in the face” on live television.

10.05am: Freeview set to remove TVNZ from OnDemand app

It’s looking set to be a big day for media news: Freeview has announced that from next June, TVNZ content will no longer be available in the Freeview OnDemand app – less than two and a half years after it was launched.

It’s an intriguing move, considering TVNZ is a part owner of the free to air television service.

In a statement, Freeview said that TVNZ content would be exclusively available to be streamed via the existing TVNZ OnDemand app, with programming from ThreeNow, Māori Television On Demand and RNZ still available via Freeview’s on demand service.

Freeview broadcast TV channels are not impacted by this change.

Sky TV’s chief executive Martin Stewart is leaving the company to return home to Europe after less than two years in the role, the company has revealed this morning in a note to the market. The company’s chief commercial officer Sophie Moloney has been appointed chief executive, effective immediately.

“The likelihood of further Covid-19 border restrictions”, was cited as instrumental in Stewart’s decision to depart.

His short stint at the helm has been something like a highlights package, with Sky negotiating a 5% equity stake to NZ Rugby, the acquisition of Lightbox and Rugby Pass, and a bumpy ride attempting to sell the outside broadcasting subsidiary.

Like many media companies, Sky was knocked by the Covid crisis. In September it reported an annual loss and wrote down the value of the business by more than $175 million.

“Since joining Sky in February 2019, Martin has led a successful turnaround and the Board acknowledges his significant contribution,” chairman Philip Bowman said.

“Despite an exceptionally challenging year in 2020, the business is well-positioned to achieve its strategic priorities of strengthening our core satellite business, growing streaming services, delivering broadband services and securing the rights to bring the best of sport and entertainment to our customers.”

Earlier this year, and just before Covid-19 took hold, The Spinoff’s managing editor Duncan Greive sat down with Martin Stewart for a chat which you can read here.

The government has confirmed its business debt scheme, first launched in the early weeks of Covid-19, will be extended through until October 2021.

As TVNZ reports, the scheme allows businesses that meet the necessary criteria to place their existing debts on hold for up to seven months.

The extension is intended to “give businesses time to explore options for continuing to trade,” Robertson said, stopping them from going into liquidation.

“It means when creditors start applying pressure, company directors have the support of a tailored mechanism to work through options with their creditors to find a way forward.

The government has announced plans to follow through on its election promise of doubling sick leave. As Stuff reports, from late-2021 the minimum amount of paid sick leave will be upped to 10 days a year. The bill goes to the house today, before heading through the select committee process over the next few months.

One thing the government has chosen not to do is change the maximum amount of sick leave that can be accumulated. That limit will remain at 20. Upping the number of sick days to 10 was a policy Labour campaigned on before the election, saying it was necessary to ensure people could take time off work if they had Covid-19 symptoms.

National isn’t too pleased with the announcement. In a scathing press release, the party’s workplace relations spokesperson Scott Simpson said an economic crisis is not the time to be increasing sick leave provisions. “Doubling sick leave just piles more costs onto business at a time when they can least afford it, coming on top of minimum wage increases and the proposal for an extra public holiday,” he said.

It’s no surprise that Act’s David Seymour isn’t onboard either. He said Labour was using the coronavirus crisis to push its left-wing agenda. “Small businesses can’t afford five extra days of sick leave on top of one of the highest minimum wages in the world, a new public holiday, ‘fair pay’ agreements and all of the other costs Labour is adding,” said Seymour. He posited that this legislation is driven by “the unions who back Labour”.

Worksafe has laid charges against 13 organisations and individuals in relation to last year’s Whakaari/White Island eruption. Two of those charged have been confirmed as government agencies.

The government revealed its plan to double sick leave from five to 10 days a year. A bill will be introduced to parliament on Tuesday.

Four new cases of Covid-19 in managed isolation were announced. A seventh member of the Pakistan cricket group has also now tested positive.

New figures showed that job numbers increased by over 27,000 in October, compared with September, largely boosted by the general election.

There was a big increase in the number of young people and Māori turning out to vote at this year’s election, according to numbers from the Electoral Commission.