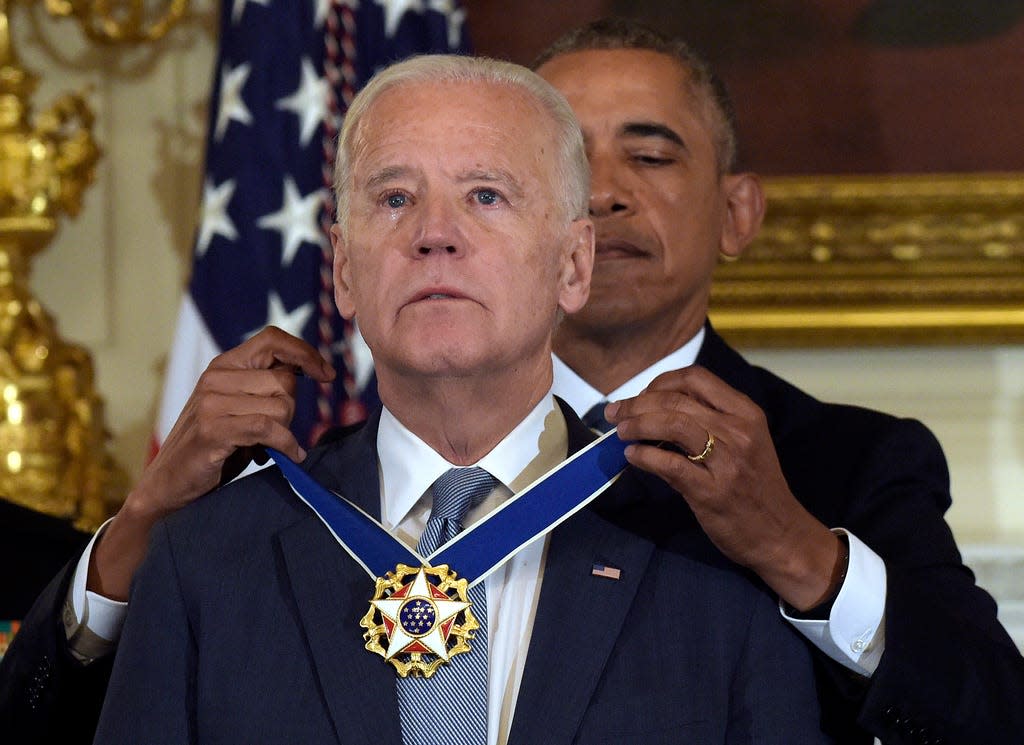 The claim: Obama ‘pleaded’ with Biden not to run for president in 2016′

In the runup to the 2020 presidential race, supporters of President Donald Trump attempted to undercut support for candidate Joe Biden by suggesting that he had only lukewarm support from former President Barack Obama.

One Oct. 28 Facebook post by Students for Trump features a photo of the former president with his arms around Biden and the headline “Obama believes so strongly in Joe Biden that he pleaded with him not to run in 201. …” It includes this statement in the caption: “Not even Obama wants Joe Biden to be president!”

The comments, laced with sarcasm, were clearly intended to convey Obama’s lack of support for his former vice president. The meme has over 1,300 shares and more than 4,300 reactions.

A similar claim — sometimes with the exact wording and more — was made in other memes and posts, including one from White House Press Secretary Kayleigh McEnany.

But the situation is more nuanced.

In the 2016 Democratic primary, Biden waited until deep into the political season to decide whether to enter the contest. He finally announced in mid-October 2015, that he would not be a candidate.

A key factor, according to Biden, was the death that May of his son Beau, from brain cancer. Biden had made no decision as former Secretary of State Hillary Clinton jumped into the fray and began winning support.

“As the family and I have worked through the grieving process, I have said all along and time again what I have said to others; that the process by the time we get through it, closes the window on mounting a realistic campaign for president,” Biden said in a statement in the White House Rose Garden. “That it might close. I have concluded it has closed.”

At the time, a New Hampshire poll by WBUR showed Biden with only 9% support, behind Clinton with 38% and Sen. Bernie Sanders with 34%.

“Biden would have had to begin with no money (and no love for raising it), no staff, and no organization in the states,” Evan Osnos wrote in The New Yorker at the time. “He would have been equipped with little more than a fervent belief that he could be President and an appetite for politics that is inexhaustible even by Washington standards.”

More: Less pomp and circumstance? Biden inauguration likely to be scaled-down affair in response to COVID

Obama and the 2016 Democratic primary

Against this backdrop, which had been building for several months as Biden vacillated, Obama was concerned that a Biden entry would be too late, in the face of Clinton’s lead, and would be difficult for the grief-stricken candidate to overcome, New York Times correspondent Peter Baker reported.

“By the time that Mr. Biden began weighing a campaign, the president had long since concluded that Hillary Clinton had the best chance of winning in 2016,” Baker wrote in April 2019. “Beyond that, Mr. Biden was awash in grief over the death of his son, hardly the state of mind for a grueling presidential marathon.”

Baker said Obama was looking for ways “to nudge” Biden out of the race, but not force him. He wrote that Obama “did not want to push and sought to give his vice president room to come to the decision himself. Over the course of weekly lunches, he gently pressed Mr. Biden on his thinking.”

Denis McDonough, who served as White House chief of staff under Obama, told the newspaper that the president, regarding the 2020 race, clearly thought Biden was prepared to be president or he would not have picked him for vice president. “But the president has also said there are a lot of good candidates in the race, and he thinks it’s important for the party to make this choice about moving forward,” McDonough added. “A full primary contest is good for the party.”

At the same time, there is strong evidence that Obama and Clinton were more in sync in style and work habits — more the disciplined intellectual than the backslapping pol, and this played into the president’s thinking in 2015.

“There was a feeling of inevitability about Hillary Clinton in every aspect,” Jen Psaki, the former White House communications director, told Politico. “So it never felt to me like it was Obama choosing Hillary Clinton over Joe Biden. It was a feeling like it’s inevitable after Hillary Clinton left the State Department that she will be the Democratic nominee, and she will become the next president. So Obama … was trying to play a part in being helpful.”

Biden, in his 2017 book “Promise Me, Dad,” recalled that he and Obama privately discussed a White House run at their weekly lunch in January 2015, and that Obama “had been subtly weighing in against.”

“I also believe he had concluded that Hillary Clinton was almost certain to be the nominee, which was good by him,” Biden wrote.

The topic came up again, Biden says, days after his son died.

“‘What are you going to do,’ (Obama) asked, ‘about running.’ I explained that I had not entirely set aside the idea of running. … And then I found myself saying, ‘Look, Mr. President, I understand if you’ve made an explicit commitment to Hillary and to Bill Clinton,’ but I assured Barack that if I decide to run I would engage Hillary on our policy differences only and not on questions of character or personality that might weaken her if she won the nomination. ‘I promise you,’ I said. And we left it at that.”

Regarding Biden’s performance in the White House, a key indicator of Obama’s views of his vice president is that he gave him such high-profile assignments as overseeing the stimulus program, managing the withdrawal of troops from Iraq, and drafting a gun control package.

Biden also played a key role in the passage of Obamacare. “Nobody in the administration was more helpful in trying to move this through the process once the president was moving forward, using his instincts about what would and wouldn’t fly,” Pete Rouse, former senior adviser to Obama, told the HuffPost.

In January 2017, shortly before leaving office, Obama awarded Biden the Presidential Medal of Freedom, calling him “the best vice president America’s ever had” and a “lion of American history,”

USA TODAY asked Students for Trump for a response. Andrew Kolvet directed us to a Politico article that we linked to in this report. He specifically cited a comment from an unidentified Democrat in that article who, according to Politico, quoted Obama as allegedly saying, “Don’t underestimate Joe’s ability to (expletive) things up.”

We rate this claim as MISSING CONTEXT. Our research shows that President Barack Obama worked to persuade Joe Biden not to enter the 2016 race for a number of factors, including his admiration for Hillary Clinton’s intellect; that Biden had waited so long in the election cycle; and that Biden would have a difficult time against Clinton, who had built up a formidable lead. Obama also felt Biden was still working through his grief over the death of his son. There is no evidence, however, that Obama “pleaded” with Biden not to run.

Thank you for supporting our journalism. You can subscribe to our print edition, ad-free app or electronic newspaper replica here.

Our fact check work is supported in part by a grant from Facebook.

This fact check is available at IFCN’s 2020 US Elections FactChat #Chatbot on WhatsApp. Click here, for more.