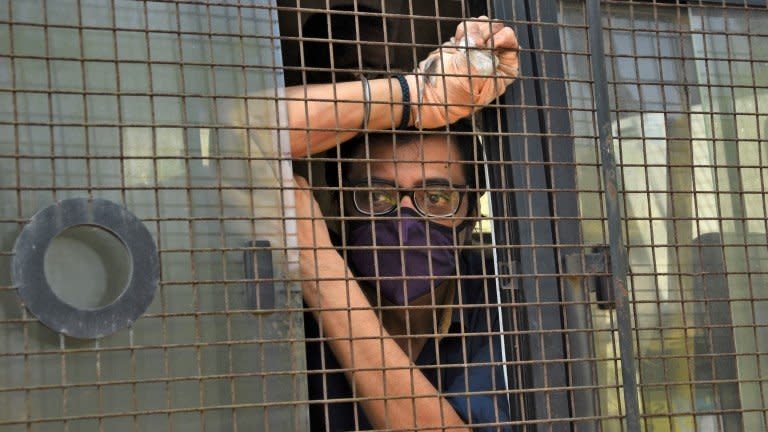 The high court in Mumbai has refused to grant bail to top Indian TV news anchor Arnab Goswami, who is under arrest in an abetment to suicide case.

The 47-year-old founder of Republic TV was detained last week and remanded to custody for 14 days.

He is being investigated for his alleged role in the death of an architect who designed his studio.

Mr Goswami and Republic TV network deny allegations he owed money to Anvay Naik, who took his life in 2018.

The case is being closely followed as Mr Goswami is a polarising figure whose contentious broadcasts have earned him loyal viewers as well as critics. His arrest, too, has divided opinion, with many alleging it was politically motivated.

A video aired on Republic TV on Sunday showed Mr Goswami shouting from inside a police van. He alleged that a prison official had attacked him the previous evening, his life was in danger and that he was not allowed to speak to his lawyer.

This happened while he was being transferred to a jail from a makeshift Covid quarantine centre where he had tested negative for the virus.

After Mr Naik killed himself, his wife accused Mr Goswami of not paying his fee. She said her husband had left a suicide note in which he blamed Mr Goswami for his death.

She has been campaigning on social media for the case to be investigated thoroughly. Maharashtra state Home Minister Anil Deshmukh recently ordered a special team to look into the case.

A police team arrested Mr Goswami from his home in Mumbai, the capital of Maharashtra, on 4 November. Images showed scuffles taking place between Mr Goswami and the police.

Republic TV has accused the police of “manhandling” Mr Goswami’s family members. But the police then accused Mr Goswami of misbehaving with them – they registered a police complaint against him for allegedly assaulting a female police officer.

Mr Goswami is known for his aggressive style of anchoring and questioning. Critics also say that he comes across as sympathetic to right-wing politics in the country.

In recent months, he has been particularly critical of Mumbai police over their handling of the death of Bollywood actor Sushant Singh Rajput. He often accused Mumbai police of being lenient in their investigation into the star’s death.

He has recently also been critical of the Maharashtra government, which is run by a coalition headed by the Shiv Sena party – a former ally of Prime Minister Narendra Modi’s Hindu nationalist Bharatiya Janata Party (BJP) in the state.

Republic TV says that Mr Goswami has been targeted over his journalism. Mr Deshmukh said “nobody is above the law”.

The Editors Guild of India urged the authorities to “ensure that Goswami is treated fairly and state power is not used against critical reporting by the media”.

A host of senior leaders and federal ministers belonging to the BJP have also criticised his arrest, saying it was “an attack on the media’s freedom of expression”.

But the main opposition Congress party, which is a coalition partner of the Shiv Sena in Maharashtra, has accused the BJP of “selective outrage”. The party said BJP ministers do not speak out when journalists are harassed and arrested by states where it’s in power.