In the US, voter suppression will remain the norm | US & Canada 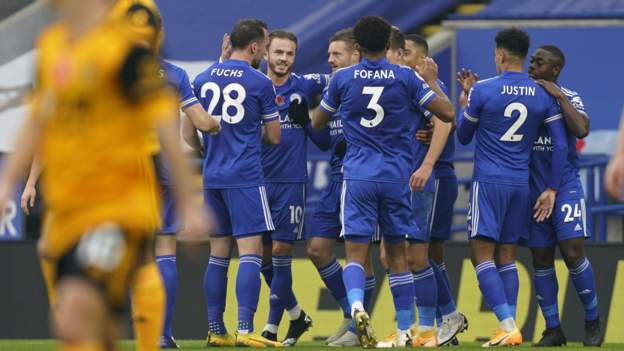 Leicester City went top of the Premier League, if only for a few hours, after a highly contentious penalty by Jamie Vardy was enough to beat Wolves at King Power Stadium.

Vardy took his tally for the season to nine goals after sending Rui Patricio the wrong way, with Wolves’ players incensed the spot-kick was given after Max Kilman handled Dennis Praet’s cross.

Wolves claimed Kilman had no time to move his hand out of the way but referee Anthony Taylor pointed to the spot after consulting the pitchside monitor.

Wolves threatened an equaliser after half-time, 19-year-old Wesley Fofana producing an excellent challenge to deny Pedro Neto a certain goal, Kilman fired over from close range, while Kasper Schmeichel made an outstanding flying save to keep out Ruben Neves.

Leicester replace Tottenham, who beat West Brom earlier in the day to go top, at the summit, two points ahead of Liverpool who are playing Manchester City at 16:30 GMT.

Leicester had to dig deep in the second half as Wolves came back strongly but Brendan Rodgers’ side head into the international break on the back of six straight wins.

Three of those have come in the past week, the Foxes hammering Leeds and, in Europe, Sporting Braga before Vardy scored for the fourth successive game to see off Wolves.

Having qualified for the Europa League group stages by finishing fifth last season, Rodgers’ side are handling the busy workload of Thursday-Sunday football with aplomb.

They were hungry chasing the ball and intelligent when they had possession.

Christian Fuchs went close with a low drilled attempt, Vardy forced Patricio to tip his ferocious attempt over and substitute Harvey Barnes was denied a late goal by a deflection.

Schmeichel’s save to deny Neves was breathtaking.

Having turned 34 on Thursday, the Denmark keeper remains a key ingredient of this hard-working side and showed great agility to deny Wolves an equaliser.

Strong finish but no reward for Wolves

But for Schmeichel’s wonderful save, Wolves would have headed back to the Black Country with a point.

Neves’ shot from the edge of the penalty area was heading for the net before the Dane stuck out a strong hand to divert it away.

Wolves will be upset by the circumstances that led to Vardy scoring his ninth goal in eight games.

Their players surrounded Taylor after he awarded the penalty for Kilman’s handball after watching the incident on a screen.

Wolves started sluggishly but sprung into life after Patricio kept out Vardy’s second penalty which Wolves did not bother protesting.

Nuno Espirito Santo’s side have made a solid start to the season but the Wolves boss has much to ponder during the international break – not least his side’s lack of goals.

They have managed just eight in the top flight – only the bottom four have scored fewer.

Leicester’s first game back from the international break is against reigning champions Liverpool at Anfield on 21 November (15:00 GMT), while Wolves host in-form Southampton on the same day at the same time.