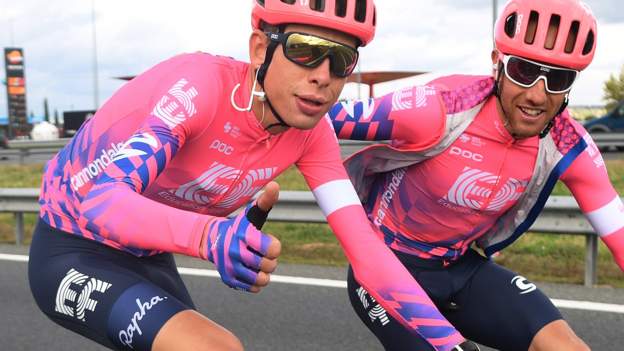 Britain’s Hugh Carthy secured a podium finish at the Vuelta a Espana as Primoz Roglic won the red jersey.

Bora Hansgrohe’s Ackermann pipped Ireland’s Sam Bennett on the line in Madrid, bringing down the curtain on an eventful road racing season.

Third place for EF Pro Cycling’s Carthy, one minute 15 seconds behind Roglic overall, was by far the best finish of his career at the top level.

Ineos Grenadiers’ Richard Carapaz finished 24 seconds behind Roglic after a last-ditch attack on the final mountainous stage up the Alto de la Covatilla saw him wrestle some time back.

In the women’s version of the Vuelta – the Ceratizit Challenge by La Vuelta – Germany’s Lisa Brennhauer of Ceratizit-WNT won the three-day race’s general classification after Valcar’s Elisa Balsamo won the final day’s sprint into Madrid.

Britain’s Alice Barnes of Canyon-Sram finished ninth in the general classification, 52 seconds down.

Carthy’s podium in this three-week race is a surprising and welcome result which elevates the Preston-born rider’s status in the peloton – and it comes after a year which saw many of Britain’s top riders struggle.

Before this race Carthy, 26, had a best result of first overall on a lower-ranking stage race in Spain four years ago, and a stage win in last year’s Tour of Switzerland.

Carthy’s star turn came on stage 12 when he won on the infamous Alto de Angliru climb – roaring with pride as he powered over the line.

His achievement is all the more valuable given he did it as part of a team which has fewer riders able to hang on in the mountain stages, and with a team budget far lower than that of Roglic and Carapaz’s big-spending squads.

Jumbo-Visma’s Roglic defended the title from last season, when he won his first three-week Grand Tour.

The Slovenian has come back strongly after conceding victory in this year’s Tour de France to countryman Pogacar on the penultimate time trial of September’s Tour de France – losing two minutes, after being the overwhelming favourite, in one of the sport’s most dramatic finishes.

Roglic used a similar team line-up from the Tour to dominate much of the peloton’s pace during the race – including ‘super domestiques’ Tom Dumoulin and Sepp Kuss.

There will be some frustration that the Dutch team did not manage to sweep all before them in 2020.

However, Roglic’s win in Spain, and in the ‘monument’ one day race Liege-Bastogne-Liege, as well as Wout van Aert’s list of stage wins and his victory at Milan-San Remo – another monument – means Jumbo-Visma have still had a hugely successful season.

“I don’t know if I’m the best Grand Tour rider but, for sure the best on this Vuelta. There are some races I haven’t won yet, but today we celebrate.”

What happened to Ineos and Froome?

Ineos Grenadiers will take some pride with second position courtesy of Carapaz, who had better form than Chris Froome, whose seven Grand Tour wins include two Vueltas.

Having won seven of the previous eight Tours de France, Ineos had been struggling to come to terms with a difficult season after defending champion Egan Bernal was forced out of this year’s edition.

They then saw lead rider Geraint Thomas fracture his pelvis when he crashed early in the Giro d’Italia, but their fortunes turned as Britain’s Tao Geoghegan Hart won his first Grand Tour.

Early in the Vuelta Froome, who is continuing his recovery from a horrific crash in 2019 and could not train during March’s lockdown, lost several minutes, and there was the unusual sight of watching one of the sport’s legends carrying drinks bottles for his team-mates as a domestique.

But the seven-time Grand Tour champion improved as the race wore on and was said to be much happier with his condition as he prepares for next season with new team Israel Start-Up Nation.