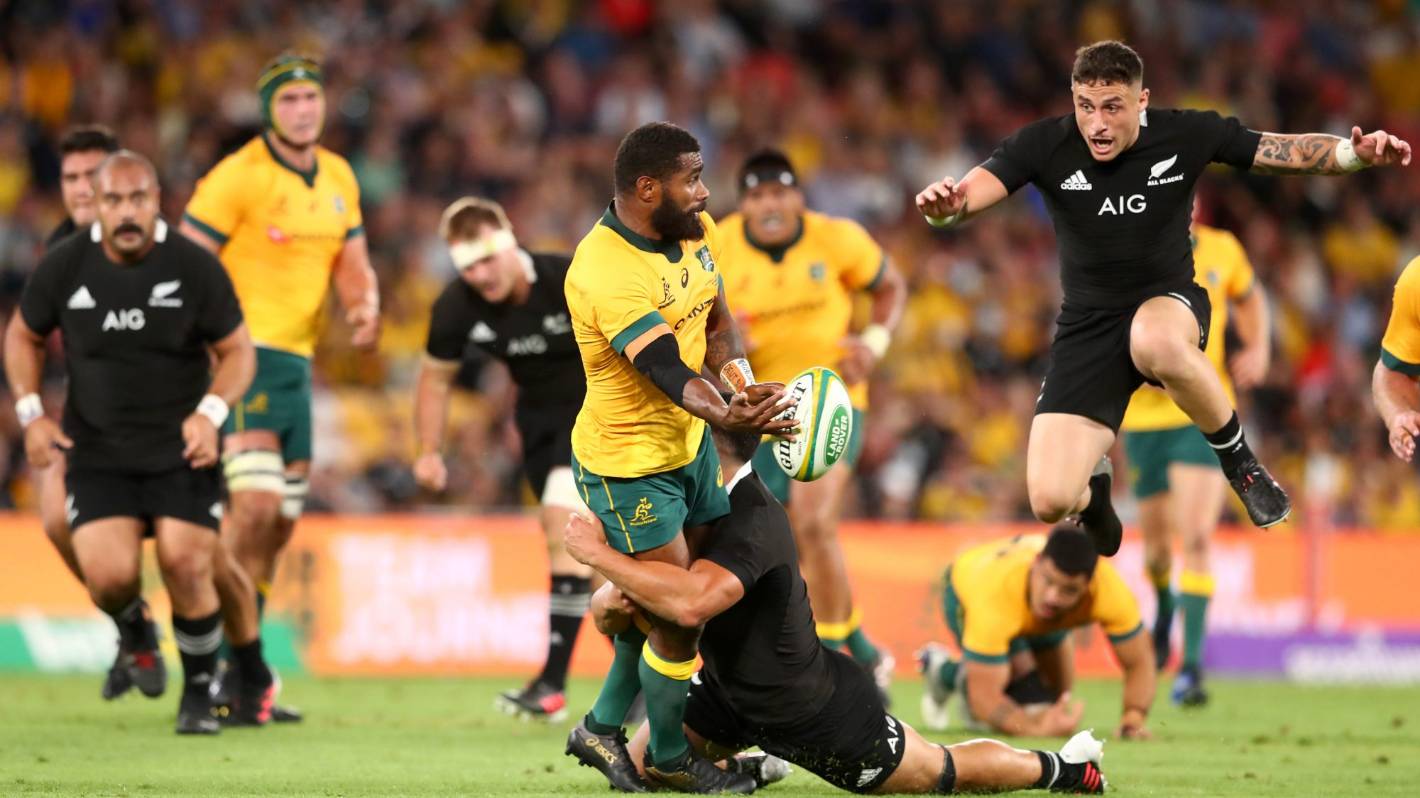 OPINION: The All Blacks fell to a disappointing 24-22 loss to the Wallabies in Brisbane on Saturday and were forced into multiple mistakes by an energised Australian side.

Wing Marika Koroibete typified the Wallabies’ determination, smacking the All Blacks’ outside backs in heavy tackles throughout the test.

But who else stood out for Dave Rennie’s side?

Here are the player ratings for the Wallabies after their first win against the All Blacks this year.

Had a cracking 40-minute shift in his 100th Test before going off with a dislocated shoulder. Got in Sam Cane’s face early to send a message the Wallabies meant business. Made nine tackles, behind only Rob Simmons (12) and Michael Hooper (14) of Australia’s forwards.

Akira Ioane stole one of Paenga-Amosa’s throws in the 15th minute in what was Australia’s only lineout miss of the night (12/13). Made a barnstorming run down the right wing after some nice Nic White service. Was in the front row during the critical scrum in the 58th minute that Australia won, leading to Hodge’s penalty which made it 15-14.

Man-handled black jerseys at will and showed good mongrel that we don’t see all the time from the tight-head prop. Hit plenty of rucks and went about his work without fuss.

Didn’t touch the ball often (one pass, one run) but made 12 tackles, mostly around the ruck, in a workmanlike 53-minute performance. Work at lineouts continues to go underrated.

His best game in a Wallabies jersey. With Australia camped on their line, Philip produced a lineout steal on the stroke of half-time with scores locked at 8-8. So often New Zealand pounce in this period of the game, but it was a big play that reminded us of Justin Harrison against the British and Irish Lions in 2001. The lineout before, Philip had been shouting at Whitelock and clearly got in his opponents’ heads. Also won a breakdown penalty for his side – partly with Marika Koroibete – that was very important. Carried with real purpose and rolled his sleeves up. Lifted in Lukhan Salakaia-Loto’s absence.

Will be the subject of a trivia question for years – who was the first Wallaby to be red-carded on debut? However, his 34 minutes beforehand showed he belongs at this level. Went after Cane, who said pre-game he didn’t know a whole lot about the angry Waratahs No.6. Swinton’s hit on him in the 14th minute was a pearler. Big tick, despite spending most of the game on the pine.

Made more tackles than any player on the field (14). Deserves all the praise that comes with the win as skipper. Made some good calls to kick for the corner rather than take an easy three. Penalised a couple of times but never far from the action, particularly when it came to cleanouts. Regularly got over the advantage line (11 runs for 35 metres).

Involved in more carries than any player on the field (13 runs for 32 metres) and lifted for the occasion in front of a home crowd. His energy was infectious. Did turn over the ball three times.

Passing game on point and communicated well. Speed to rucks up for debate. Clever to make it known to refs that Scott Barrett’s hand knocked the ball out of his grasp in the 68th minute, which led to a yellow card. No major blunders.

After no shortage of debate during the week about whether he is indeed a long-term No.10, Hodge delivered in spades. His chip kick over the top led to Australia’s first try and it was a treat to watch. A surprisingly good left-to-right passing game. Made a great tackle on Ngani Laumape in the fifth minute but produced an even better one in the 40th minute to deny Codie Taylor in a one-on-one collision. Outstanding. His kicking game was intelligent and had five from seven off the tee. Opens a can of worms in terms of the No.10 jersey moving forward.

Absolutely brilliant on both sides of the ball. His work-rate typified what it means to represent the Wallabies. Koroibete ran like his life depended on it (10 runs for 82 metres) and his tackles stuck. He even combined with Philip for a critical penalty over the ball. Then at the end with New Zealand pushing forward one last time in pursuit of victory, Koroibete raced off his line, grabbed Damian McKenzie, before getting off the ground and ripping the ball out of Jordie Barrett’s possession for a knock-on that ultimately sealed the game for Australia. A world-class winger. Was yellow-carded just before half-time but certainly made up for it.

Relished the No.12 position and bent the line at will. Did pop up at first receiver quite a bit as well. Made a nice early break and had the most runs of any back on either side (11 carries for 22 metres). Despite not really playing there before, surprised many.

Continued his fine form this year. Was his evasive self and oozed confidence, as seen with a rare penalty over the ball in the 61st minute. Came from the field shortly after though and might be sidelined through injury. His early bump on Anton Lienert-Brown was a beauty.

Announced himself on the Test scene with a try after 130 seconds in what was his first touch of the footy. Burned through 57 metres from six carries and squeezed through narrow gaps on either edge of the field. As far as debuts come, they don’t get much better. A player of the future who should be retained in Australia’s last few Tests of the year.

Diffused a bomb early on and looked assured at the back. Broke first tackles – he beat four defenders all up – and showed his kicking game is improving. Arguably his best performance in a Wallabies jersey.

Came on in the 65th minute and threw the final pass for Taniela Tupou’s 75th minute try. His three lineout throws all good when the game was in the balance.

Fabulous debut for the 20-year-old, who became Australia’s youngest prop since 1928. Played the entire second half and didn’t look out of place. Helped with an important scrum penalty that swung the pendulum of the match when Australia only had seven players pushing, to New Zealand’s eight. For a youngster with a bright future, beating the All Blacks in your first Test isn’t a bad way to get the confidence up.

Scored the match-winner but it was his work beforehand that shouldn’t go unnoticed. The big prop made two tough carries and got back to his feet super quickly on both occasions. Was on the tight-head side when Australia won the scrum penalty as mentioned above. Although Alaalatoa is back in the starters, Tupou’s work of the bench worked a treat.

Knocked on following a shocking pass at his ankles and had the ball ripped out of his possession by Beauden Barrett. Did win an important lineout though. Helped Australia close out victory and that was the most important thing.

Only on for 10 minutes and did little wrong. Caught an important lineout before Tupou’s final try and made a nice cleanout to help Australia retain possession with front-foot ball. Held his nerve at the final scrum when the ball popped out before passing to Noah Lolesio.

Another top performance right at the death. Did everything required of him.

Looked nervous on the bench but his 15-minute cameo was super. Passes were to players’ chests and booted the ball into Suncorp Stadium celebrating a win against the All Blacks in his second Test. Reaction said it all after a tough debut.

Didn’t touch the ball and missed a tackle.