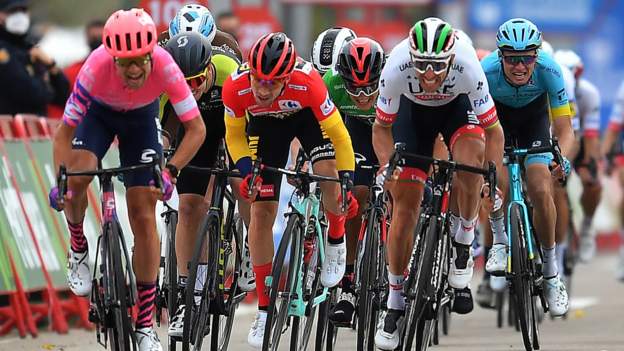 Defending champion Primoz Roglic extended his lead at the Vuelta a Espana to 45 seconds after finishing second in stage 16.

The 31-year-old Slovenian, who has won four stages in this year’s race, was edged out by Denmark’s Magnus Cort Nielsen.

Britain’s Hugh Carthy finished 28th and remains in third place, with his deficit extending to 53 seconds.

The 18-stage event concludes in Madrid on Sunday.

France’s Remi Cavagna spent all day in the breakaway but was caught inside the final three kilometres as the peloton increased the pace to create a denoument that Cort Nielsen edged.

Veteran Alejandro Valverde led the charge but Cort Nielsen powered home to continue what has been a strong Vuelta for the American EF Pro Cycling team.

Roglic let out a roar of frustration as he crossed the line but strengthened his grip on a race he has led since replacing Richard Carapaz by winning stage 10.

The Tour de France runner-up now needs to preserve his lead in Saturday’s 178km mountain stage, which features five categorised climbs on the road to Alto de La Covatilla, including a 10km stretch at an average of 7% to the summit finish.