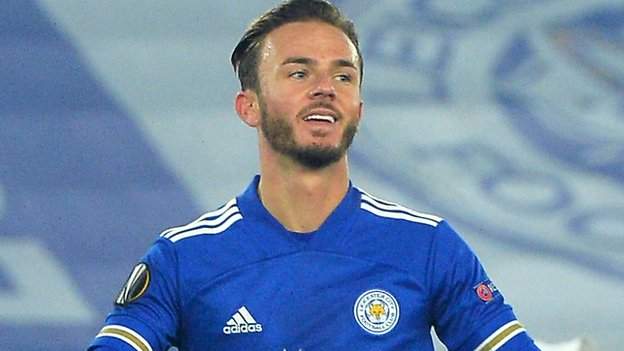 James Maddison wants to prove he is ready for a return to England duty after putting the disappointment of not making Gareth Southgate’s latest squad behind him with an excellent performance in Thursday’s win against Braga.

The midfielder had a number of injury set-backs last season and struggled with a calf injury earlier in the current campaign, but was back to his best in the 4-0 Europa League win as he scored one goal and assisted another.

The 23-year-old’s impressive performance came just hours after he learned he had not been called up for England’s upcoming Nations League fixtures against Belgium and Iceland.

Asked if he was disappointed to miss out, Maddison told BT Sport: “Yes, if I am being honest.

“I want to be in the England squad, that is what I dreamt of as a little boy. I have had a taste of it and I want more.

“I am back fit now – I am getting the minutes in the legs. I had a long injury last year and had a couple of knocks this year so I haven’t had a consecutive run of games.

“I can’t control whether I am in the England squad or not – I don’t pick the teams but I can only concentrate on what I do at Leicester.

“We’re second in the Premier League and three wins out of three in the Europa League, so keep my form for Leicester and the rest will take care of itself.”

Iheanacho opened the scoring midway through the first half when he prodded in after playing a one-two with Maddison.

The two combined again before the break to almost score a second but this time Braga goalkeeper Matheus made a superb diving save to deny Maddison.

But Iheanacho got his and Leicester’s second soon after the restart when his shot from the edge of the area took a heavy deflection to land in the back of the net.

That prompted a dominant spell for the hosts, with Iheanacho going close to completing his hat-trick, but his shot was kept out by Matheus.

A third for Leicester duly arrived with Iheanacho this time turning provider, squaring a pass for substitute Dennis Praet to tap in, and Maddison wrapped up a brilliant win when he forced his way through the defence before finishing.

It was a comfortable night for the Foxes against a Braga side that are experienced European campaigners and had won their six previous games in all competitions.

The victory continued Leicester’s own good form, with five wins from their last five games having propelled them to second in the Premier League, and top of Europa League Group G with nine points from nine.

Leicester boss Brendan Rodgers said: “We had to work for it and in the end we were very good. In the second half we were very dynamic and created a number of chances.

“There are no selection headaches, the players that have come in have been absolutely outstanding. It is a long season and we need them all.”

The Foxes’ fine form is all the more impressive considering they have several first team players out through, or recently returning from, injury.

It is testament to Rodgers’ managerial ability that despite that he is managing to get the best out of his squad, with the players coming into the side making important contributions.

Iheanacho is one such player. The forward has made just three appearances for Leicester in the Premier League this season but has featured in all three of their Europa League games, scoring in both the games he has started.

There was a touch of fortune about both his goals against Braga, with the ball rebounding to him from a save for the first, allowing him to prod into an empty net, and the second taking a significant deflection.

But it was just reward for an energetic and committed display that exemplified the spirit and determination in this Leicester squad.

A first since 1961 for Leicester – the stats