Why the hell are the Gold Gloves being announced tonight? 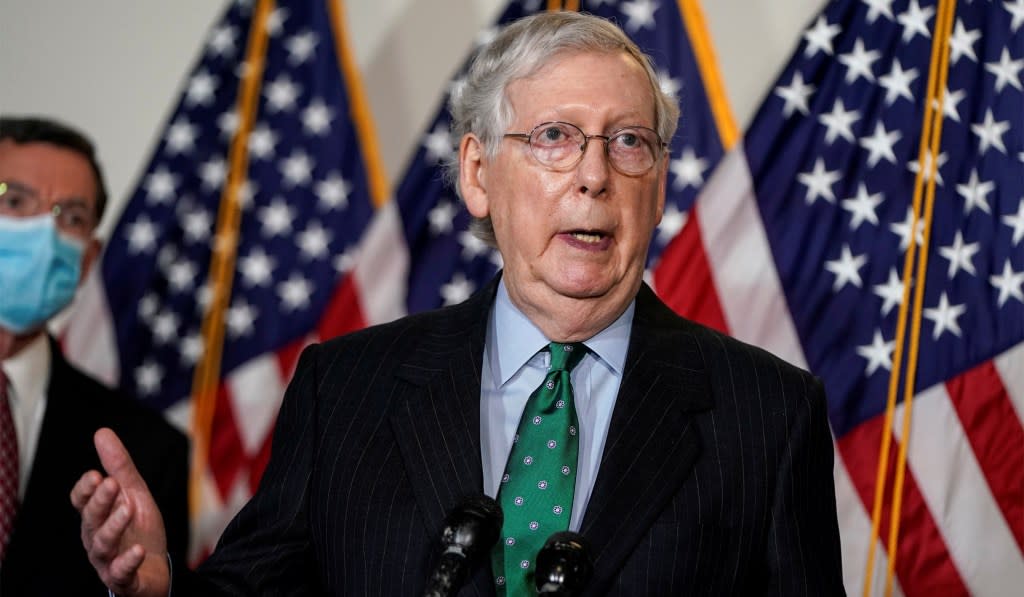 All eyes are on the Senate this Election Day as Republicans look to maintain control of the legislative body where they currently hold a 53-seat majority.

Shortly after polls closed on Tuesday, the Associated Press had called 15 Senate races: seven in favor of Democrats and eight in favor of Republicans, including the reelection of Senate majority leader Mitch McConnell (R., Ky.). McConnell held off Democratic challenger Amy McGrath, a retired Marine combat pilot, to win a seventh term in the Senate.

In the House, the AP has called 34 races in favor of Democrats and 60 in favor of Republicans, including wins by newcomer Republicans Madison Cawthorn in North Carolina, a 25-year-old paraplegic survivor of a near-fatal car crash, and Marjorie Greene, who has openly supported the conspiracy theory QAnon, in Georgia.

Twenty-three Republican-controlled seats and 12 Democrat-controlled seats are up for election: seven of the posts, all of which are currently Republican-held, have been rated a “toss-up” by the Cook Political Report, a nonpartisan outlet dedicated to analyzing and predicting elections.

Democrats would need a net gain of three seats to control the Senate in the event that Joe Biden wins, as the vice president can act as a tie-breaker on Senate votes. Should Trump and Vice President Mike Pence win, Democrats would need a net gain of four seats to wrest control from the current Republican majority. There are two independent senators who caucus with Democrats.

McConnell warned recently that Democrats had a “50-50” chance of winning a majority in the Senate.

“It’s a 50-50 proposition,” McConnell said. “We have a lot of exposure. This is a huge Republican class….There are dogfights all over the country.”

In Georgia, both Senate seats are up for grabs and may be subject to a runoff race held on January 5 if a candidate cannot pass 50 percent of the vote by Election Day. If one or both Georgia seats go into a runoff, that could leave the fate of the Senate unknown for weeks after November 3.

Graham is neck and neck with Democratic challenger Jaime Harrison, a marked change from earlier this year when the South Carolina senator enjoyed a double-digit lead. The Democrat smashed Senate fundraising records by hauling in $57 million during the third quarter — twice as much as Graham has raised in the previous six quarters combined.

Graham has breezed to victory by double-digit margins in each of his reelection races since he first won his seat in 2002. In 2016, President Trump won the state by more than 14 points.

But Harrison has proven a formidable opponent to Graham, the chairman of the Senate Judiciary Committee, who has been scorned by Democratic donors for leading the push to confirm Judge Amy Coney Barrett to the Supreme Court ahead of Election Day. If elected, Harrison would be the first Democratic senator to represent South Carolina in over two decades.

The race between Tillis and Democratic opponent Cal Cunningham in North Carolina has also attracted a great deal of national attention. In early October it was revealed that Cunningham, who had run on a campaign of “truth” and “honor,” had allegedly had an extramarital relationship. The U.S. Army Reserve is investigating Cunningham, who is a Reserve officer, over reports that he had an affair this year with Arlene Guzman Todd, whose husband has served in the Army.

In Iowa, Democratic challenger Theresa Greenfield leads Ernst by three points, according to a recent Des Moines Register poll. While both Iowa senators are Republicans, Ernst’s seat was previously held by a Democrat, Tom Harkin, who held his seat for 30 years before his retirement in 2014. Ernst is a Trump ally in a state where support for the president has waned since 2016.

In Maine, Collins is in danger of losing the seat she has held since 1997 to challenger Sara Gideon after mounting criticism for her decision to support the confirmation of Supreme Court Justice Brett Kavanaugh and to vote to acquit President Trump in his Senate impeachment trial earlier this year. Gideon, who serves as state House speaker, leads in the polls.

In Montana, Daines, the incumbent, will take on Steve Bullock, the outgoing governor of Montana. Similarly, in Colorado, Republican incumbent Gardner is up against the state’s former governor, John Hickenlooper, who also made a bid for the 2020 Democratic presidential nomination.

However, Michigan’s Democrat-held seat may be in danger of flipping, as incumbent Senator Gary Peters holds a single-digit lead over Republican Army veteran John James. The incumbent’s slight lead has largely remained within the margin of error in recent polls. RealClearPolitics rates the race a “toss-up.”

In the House, Democrats will look to maintain or grow their majority, which currently stands at 232 seats to Republicans’ 198. The Cook Political Report lists 25 House seat races as “toss-up,” 16 of which are Republican seats in danger of flipping.

Assuming there are no vacancies and no members from a third party, Democrats or Republicans need a minimum of 218 seats to ensure control of the House of Representatives. As Democrats currently hold 232 seats, they would need a net loss no greater than 15 seats to remain in control. Republicans have 198 seats.