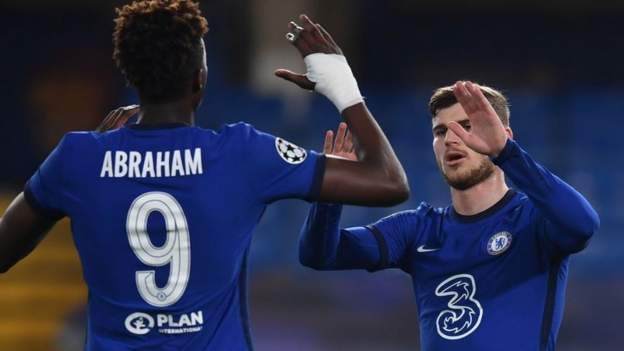 Chelsea maintained their unbeaten Champions League start as they strolled to victory over Rennes at Stamford Bridge to continue their smooth progress towards the knockout stage.

Frank Lampard’s side, who had opened their campaign with a draw at home to Sevilla and a win away to Krasnodar, took full advantage of an injury-hit Rennes side who were then harshly reduced to 10 men before half-time.

Timo Werner gave Chelsea a comfortable interval advantage with two penalties, the first after he was fouled by Dalbert and the second when the same defender was penalised for handball – Rennes’ sense of frustration exacerbated when the defender received a second yellow card for the offence.

The second penalty seemed harsh, as Dalbert blocked an Abraham shot and saw the ball deflect onto his raised arm.

German referee Felix Zwayer awarded the contested penalty after a visit to the pitchside monitor, and then sent off Dalbert.

Chelsea, who were without Kai Havertz after he returned a positive test for Covid-19, were in total control and emphasised their domination five minutes after the break when a superb delivery from Reece James was turned in at the near post by Tammy Abraham.

Chelsea were rarely threatened but new keeper Edouard Mendy thwarted his former club late on with a fine save from Clement Grenier.

It was a comfortable three points that puts Chelsea in comfortable control of Champions League Group E.

When Chelsea were forced to come from 3-0 down to earn a point at West Bromwich Albion, and then conceded a last-minute equaliser against Southampton in a 3-3 draw at Stamford Bridge, if there were not exactly murmurings of discontent around Lampard, there were certainly questions being asked.

Lampard had added attacking flourishes to his side in the shape of Werner, Havertz and Hakim Ziyech but it looked like Chelsea were highly vulnerable in defensive areas.

Lampard insisted the problems would be addressed once defenders Ben Chilwell and Thiago Silva settled and new keeper Mendy bedded in as replacement for the flawed Kepa Arrizabalaga, who was once more at fault at home to Southampton.

The evidence is mounting that he was right as Chelsea have now gone more than seven hours without conceding a goal and have put together a 10-match unbeaten run.

Chelsea’s victory here was achieved under little pressure but this is still a very good sequence and with a place in the Champions League knockout stage pretty much assured and progress being made in the Premier League, Lampard has every reason for satisfaction.