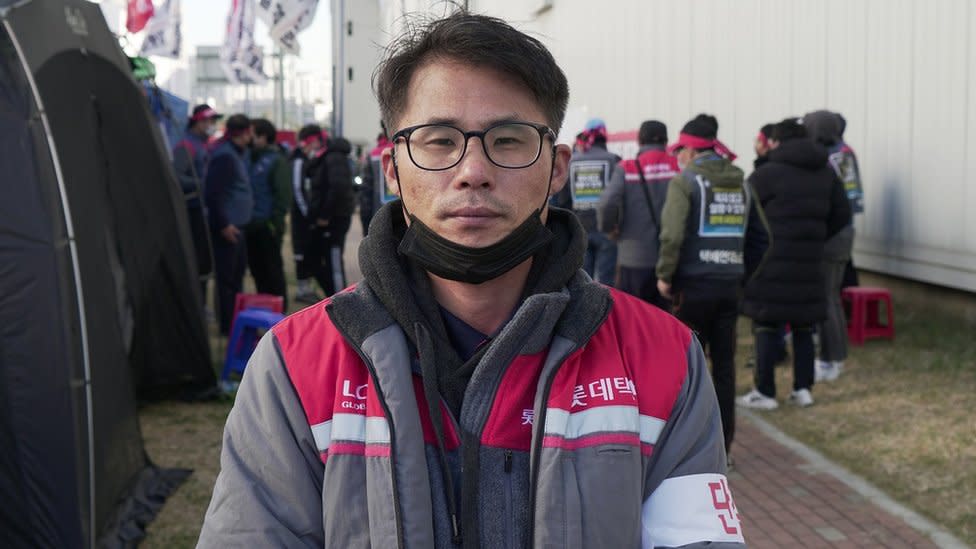 It was an hour before sunrise, 21 hours into a shift, and Mr Kim had delivered more than 400 packages. The 36-year-old delivery driver had been working since 5am the previous day. He messaged a colleague, pleading to skip a round of parcel deliveries.

Four days later, Mr Kim was dead. He is one of 14 workers in South Korea who union officials say died because of overwork – most of them delivery drivers.

The fates of the 14 drivers can not be directly linked to overwork, but their families described the causes of death as “kwarosa” – a Korean term used for sudden death due to heart failure or a stroke as a result of extreme hard work. Drivers in South Korea are struggling to cope with the sheer volume of online orders during the Covid-19 pandemic. As the packages have piled up, so has the pressure.

One of the drivers who died was 27-year-old Jang Deok-jin, a former Taekwondo enthusiast who had lost 15kg (33lbs) after doing 18 months of night shifts, according to his family. Deok-jin came home from a night shift earlier this month at around six in the morning and headed for a shower. His father found him dead face down in the bathtub an hour later.

“We loved that boy. When he said it was such hard work we told him it was ok to stop working, but he used to tell me that he had plans for his future,” his father said. “I am to blame for not discouraging him from working so hard and exploiting himself.”

Mr Jang’s anger took him to South Korea’s National Assembly. In grief he fell to his knees and begged congressmen to look at the circumstances surrounding his son’s death.

“It is my son who died,” he said. “I am going to let the whole world know about it. I am going to get to the bottom of it.”

Deok-jin’s case, along with others, won the attention of President Moon Jae-in, who called for an overhaul of working conditions for delivery employees, saying they had suffered some of the worst hardships under the pandemic.

The pressure is particularly acute in South Korea, where home deliveries are expected in hours not days.

‘We want to live’

In August, South Korea’s labour ministry stepped in and urged the country’s major logistics companies to sign a declaration to ensure drivers got enough rest and did not have to work continuous overnight shifts. Three of the biggest firms, CJ Logistics, Coupang and Hanjin Transportation, all made public apologies over the deaths of workers.

CJ Logistics said it would add more drivers and ensure all couriers were signed up for industrial accident insurance. Coupang said it was hiring more people while admitting the step was “not enough”. Hanjin Transportation pledged to reduce the workload for its staff.

But most contracts signed by the workers are with independent agents who act as middlemen, rather than with the company itself, leaving them outside the protection of labour law. Union leaders also said they had yet to see the promised increase in manpower at most depots.

Around the developed world, delivery drivers are bearing the burden and the cost of the pandemic-induced new normal. The coronavirus has accelerated our love of internet shopping – each year, demand for delivered goods has increased by 10% in South Korea. This year, so far, it has increased by double that. No human interaction is needed when shopping online, but there are humans involved in the transaction.

I visited a warehouse depot the size of an aircraft hanger on the outskirts of Seoul last week, where several hundred workers for Lotte Global Logistics were on strike demanding better pay and conditions. Their rally cry was, “We want to live”.

Kim Duk-yeon, 48, hadn’t told his family he was on the picket line, as they knew he could not afford to go a day without pay.

“Before I used to think this work was just hard, but this year especially with the increased shipping due to the coronavirus, the situation on the ground got a lot worse,” he said. “As I worked more and more I thought maybe I too would die.”

As the union march made its way through the warehouse there was an incessant clatter from the conveyor belts which snaked around the building moving thousands of boxes and bags of all shapes and sizes. Hundreds of delivery vans were lined up in neat rows with very little space between them. The drivers have to sort their own packages before they can even get behind the wheel.

Duk-yeon gets to the depot around 6.30am and can be sorting and packing for four to five hours before he gets on the road. Filling the trucks is like a giant jigsaw puzzle – fitting smaller and larger boxes into the space. No package can be left behind.

Drivers there said they are paid around 800 Korean won per parcel ($0.70, £0.50), and these days they deliver around 350 packages a day. Most also have to pay for the wages of workers who bring packages down to the floor of the warehouse, and they have to pay penalties if deliveries are late or lost.

The day after I visited the depot, Lotte Global Logistics settled its dispute with the unions. The company also pledged to deploy a thousand more workers to sorting stations and abolish the penalty payments.

Shin Bok-sun, a 43-year-old mother of three, said she hoped one day the workload would be reduced enough that she could see her kids at night.

“We are under a lot of pressure. There are customers who order groceries and call incessantly to complain that they need to make lunch or dinner with their order,” she said.

“If the delivery doesn’t come the same day, customers will call and say, ‘I need to wear this skirt to go out today. Why is it coming at midday?'”

There are some small signs the deaths of delivery worker deaths is having an impact on South Korean shoppers. In the windows of some apartments you can see notes which read, “Dear deliveryman, it’s okay to be late”. In my apartment block, people have started to meet our delivery man with hot coffee and some breakfast. And hashtags like #it_is_ok_to_be_late, #Thankyoudeliverymen and #weneedtostopthedeathofdeliverymen have trended on social media.

The coronavirus pandemic is likely to be with us for some time, and may have altered our shopping habits in the long term. These small signs of appreciation for the delivery drivers may not substantially change the demands placed on them but the gestures are welcomed by drivers as they prepare for the long shift ahead.