Trump’s long history of trying to stick it to sports: A timeline 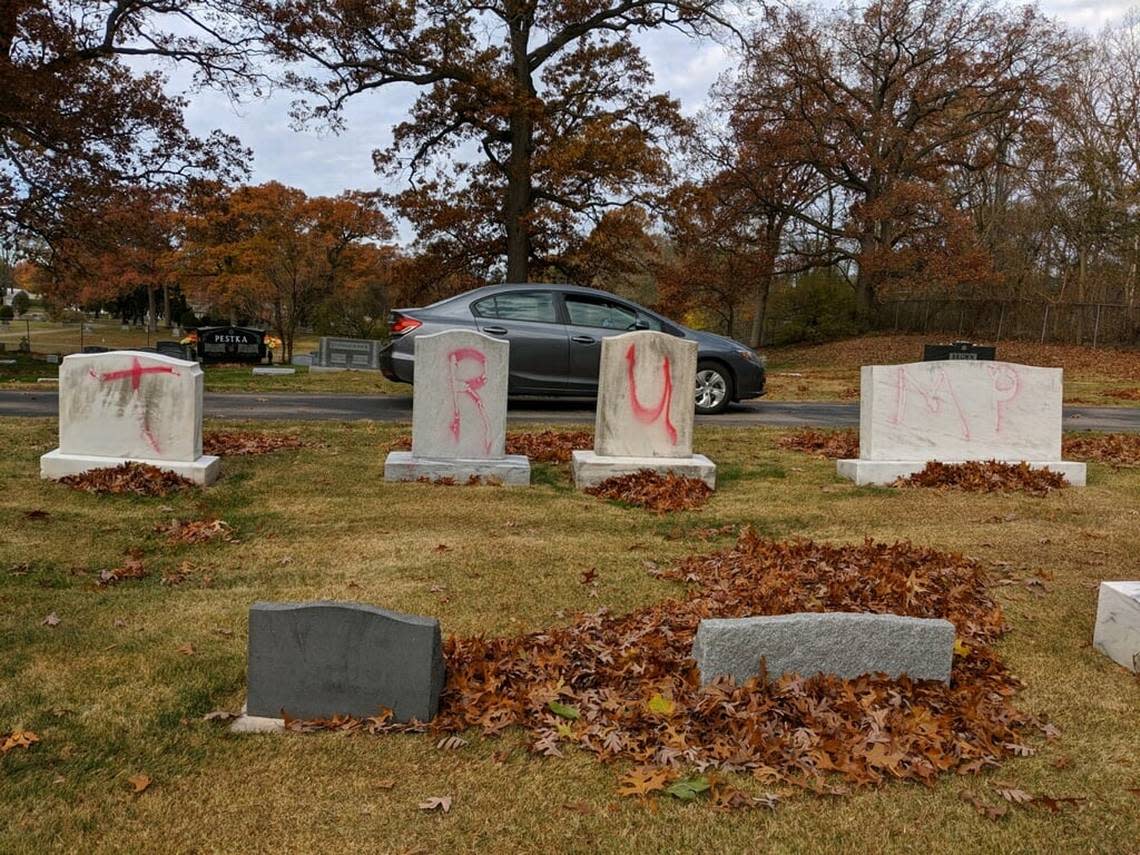 Headstones in a Jewish cemetery in Michigan were discovered vandalized with red “Trump” graffiti Monday, the day before Election Day, police say.

Photos show several headstones at the cemetery owned by the Congregation Ahavas Israel in Grand Rapids spray-painted “with the letters TRUMP and MAGA,” Rabbi David J.B. Krishef, the synagogue’s leader, said in a statement to The Detroit News.

The synagogue reported the incident to police, which arrived at the cemetery to find six headstones that had been defaced, WZZM reported. Police told the outlet the graffiti seemed “relatively new.”

As of 8 p.m. Monday, there were no suspects, police said, and no other evidence was left at the scene, WWMT reported.

The synagogue also contacted the Anti-Defamation League’s Michigan chapter, which posted photos of the headstones to social media.

We are appalled by the reported desecration of gravestones at the Ahavas Israel Cemetery in Grand Rapids, MI. We are in close touch with the Jewish community and Law Enforcement to investigate this vandalism. pic.twitter.com/mVeGrlsWxE

“We are appalled by the reported desecration of gravestones at the Ahavas Israel Cemetery in Grand Rapids, MI,” the civil rights group wrote on Twitter. “We are in close touch with the Jewish community and law enforcement to investigate this vandalism.”

The Michigan Democratic Jewish Caucus said it was “outraged” by the incident, calling it a “heinous act … committed on the eve of the 2020 election to send an intimidating message to the president’s opponents, and particularly, Jewish voters.”

McClatchy News has reached out to the Republican Jewish Coalition for comment.

Krishef told The Hill it’s unclear if the incident was anti-Semitic in nature.

“It may just have been opportunistic vandalism against a cemetery which is isolated and hard to see from the road, on Halloween weekend, not an attack against the Jewish community,” he said. “We don’t know.”

“We stand united with our Jewish friends and neighbors against this disgusting act of vandalism, desecration, and hate toward our fellow human beings,” he wrote. “Anti-Semitism must find no home in our community.”

Carolyn Normandin, regional director for the ADL, told The Hill she didn’t know if the vandalism was intended as an attack on the Jewish community, but said anti-Semitic incidents are on the rise.

In 2019, the ADL recorded 2,107 anti-Semitic incidents — which include assault, harassment and vandalism — up 12% from the year before. It was also the highest number recorded since the league began the Audit of Anti-Semitic Incidents in 1979.