FA Cup: All first-round ties including non-elite teams to go ahead as planned

A Forum For Investors & Traders – Bio Forum By Bill Spetrino

‘We have to keep fighting’: Asylum seekers at US-Mexico border | Mexico News 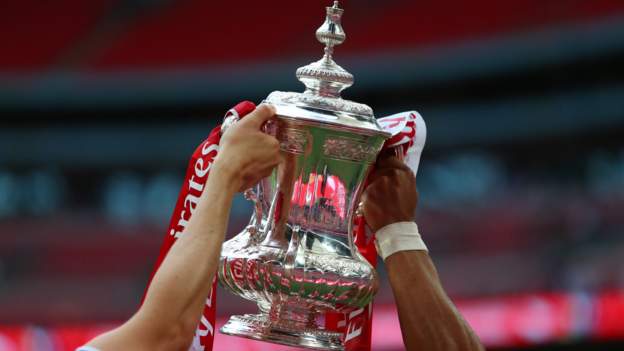 All 40 FA Cup round one ties, including those involving non-elite teams, will be played as planned from 6-9 November.

Elite sports can continue behind closed doors during the four-week lockdown from Thursday but rules on grassroots and amateur sport are to be finalised.

The government has confirmed that the 10 non-elite teams left in the FA Cup can play under elite protocols.

But golf courses, driving ranges and tennis courts in England have been told to close until at least 3 December.

The BBC is showing 13 of the FA Cup first-round ties, with FC United of Manchester v Doncaster on BBC Two on Saturday (17:30 GMT).

There will be live streams of 12 further matches on BBC iPlayer and the BBC Sport website over the weekend.

All the matches will be played behind closed doors, with losing teams set to receive a share of prize money to lessen the financial impact of no fans attending.

What about other amateur sports?

Under the new restrictions, many facilities, including gyms and pools, must close, along with other indoor and outdoor leisure centres.

Both golf and tennis are trying to make a case for both to still be permitted outdoors between two individuals from different households in line with restrictions on exercise.

However, Prime Minister Boris Johnson’s official spokesperson said the government will not reverse the decision to close golf courses and tennis courts in England.

When asked why the government is shutting them, he said: “People are able to use public spaces or walk or run in the park.

“The purpose of the tougher regulations, which I expect are going to be difficult for very many people, are to significantly reduce social contact.”

Golf courses in Wales have been shut since 23 October, but Scotland and Northern Ireland have allowed their courses to stay open.

Tennis courts are also currently closed in Wales but open in Scotland and Northern Ireland, with protocols in place.

Digital, Culture, Media and Sport select committee chair Julian Knight MP said he did not think a “blanket ban” that includes stopping golf and tennis in England was the “correct way of going about things”.

“These sports are uniquely built for social distancing and they opened safely in the spring in a limited way,” Knight told BBC Radio 4’s Today programme.

What about youth sports?

BBC senior sports news reporter Laura Scott says there is little hope that under-18s sport will be exempt and almost no hope of indoor gyms and pools reversing orders to close.

Former Wales midfielder Robbie Savage is urging the government to allow grassroots sport for children to continue as long as schools remain open for their “physical and mental wellbeing”.

“I would totally understand that if school were to be closed then grassroots sport should run parallel to that,” Savage, who coaches youth football, told BBC Radio 5 Live.

“There is real concern – how do you explain taking away playing football three or more times a week when they are still going to school? It’s heartbreaking.

“I don’t think it will be allowed to continue, I think it will be back in the first week of December and I urge the youngsters to be optimistic – last time it was three months out but this time they hopefully have a date to adhere to.”