How the controversial Nile dam might fix Sudan’s floods 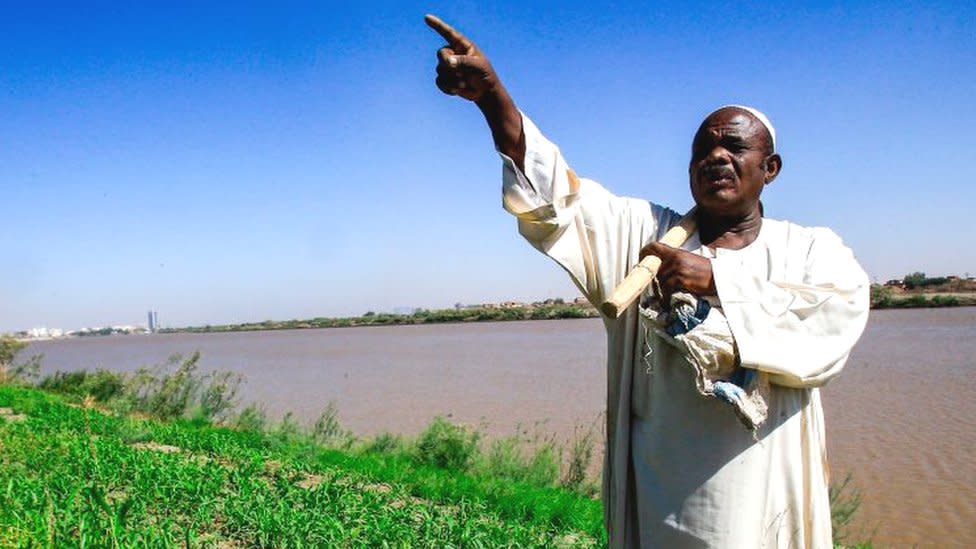 In our series of letters from African journalists, Zeinab Mohammed Salih looks at what Sudan makes of Ethiopia’s controversial Nile dam.

Unprecedented flooding in Sudan this year led to the deaths of more than 100 people and affected 875,000 others.

Entire residential neighbourhoods were destroyed while power and water supplies were disrupted when the River Nile recorded its highest level in living memory.

Some experts said that if the Grand Ethiopian Renaissance Dam, upstream on the Blue Nile tributary, had been fully operational, the effect on Sudan would have been less disastrous.

Ethiopia started building the dam in its northern highlands, from where 85% of the Nile’s waters flow, in 2011 and this year the reservoir behind the dam started to fill. When it is fully operation in several years’ time it will become Africa’s largest hydroelectric plant.

But it has been fraught with controversy as Egypt, which is downstream, fears the $4bn (£3bn) dam will greatly reduce its access to water.

Negotiations, which have not reached a deal, are centred on how fast to fill the dam – and Sudan has been stuck in the middle.

Salman Mohamed, a Sudanese expert on international water law and policy, says Egypt’s Aswan dam shows how flood waters can be regulated effectively on The Nile.

“We lost people, and properties of billions of pounds, but look at Egypt – they haven’t lost a single seedling because they normally keep the flood water in their high dam and we don’t have one like that, so the Ethiopian dam could have saved all that,” he said.

Sudan does have eight dams on The Nile.

“But our dams are too small,” says Dr Mohamed, who is a fellow at the International Water Resources Association.

“Egypt has managed to use the flood water it collected for its agricultural projects in the desert.”

During fraught talks over the filling of the dam and how much water it should release – which recently restarted under the auspices of the African Union – Sudan has tended to side with Egypt.

This stance was adopted under the government of former President Omar al-Bashir – and the generals who remain part of the transitional government now ruling Sudan after the 2019 coup are strong allies of Egypt.

Sudan’s negotiator under Bashir, Ahmed El-Mufti, had also raised concerns about safety and security of the dam.

He said that if it was destroyed, it could damage the entire region, including Sudan’s capital, Khartoum – where the White and Blue Nile meet.

More on the mega dam:

In fact Sudanese officials are walking a tight rope to avoid any conflict.

This was not helped last week when US President Donald Trump said – whilst on a joint phone call to the Sudanese and Israeli prime ministers about the restoration of their countries’ relations – that Egypt might “blow up” the dam.

Asmaa Abdallah, Sudan’s transitional foreign minister until July, has always maintained dialogue is the only solution.

Sudan wants to have a peaceful resolution as it can see the benefits of the mega dam – not only in terms of regulating flood water, which is often a problem.

According to Dr Mohamed, it will also enable Sudan’s own dams to generate more electricity as well as buying cheap and clean electricity from Ethiopia.

He says it will also allow for three growing seasons – at the moment crops are harvested around October or November – but if the flow is regulated, farmers will be able to plant and irrigate more often.

In years of drought, when usually there is very little water – the dam would ensure a supply.

As it is Sudan only uses about 12 billion cubic metres or 64% of the water it is entitled to annually under the 1959 treaty signed with Egypt over sharing the resources of the Nile, says Dr Mohamed.

Given that the UN says about 10 million people in Sudan are facing food shortages this year – partly caused by coronavirus lockdown measures – he can only see the long-term benefits of the mega dam project.

Explore the Nile with 360 video

Alastair Leithead and his team travelled in 2018 from the Blue Nile’s source to the sea – through Ethiopia and Sudan into Egypt.

Opinion on the streets in and around the capital tends to be more in sympathy with Ethiopia.

“We support them because we share sentiments towards the Ethiopian people,” said Salah Hassan, a 44-year-old father of one whose home in Omdurman, Khartoum’s twin city, was partly damaged in the floods.

Mohamed Ali, a 37 year old living in Khartoum North, sees it as a source of African pride – and a job opportunity for many.

“There are millions of Ethiopians residing in Sudan now, but I think after the dam will be built they will go back to their country along with many Sudanese people to work there,” he says.

“I support the dam 100% as any project that benefits the African people will be great.

“People in the Horn of Africa suffered a lot and they need to have such big developmental projects.”

But until the dispute is settled over how Ethiopia’s dam is regulated, it remains unsettling and worrying for those living and farming along the world’s longest river.