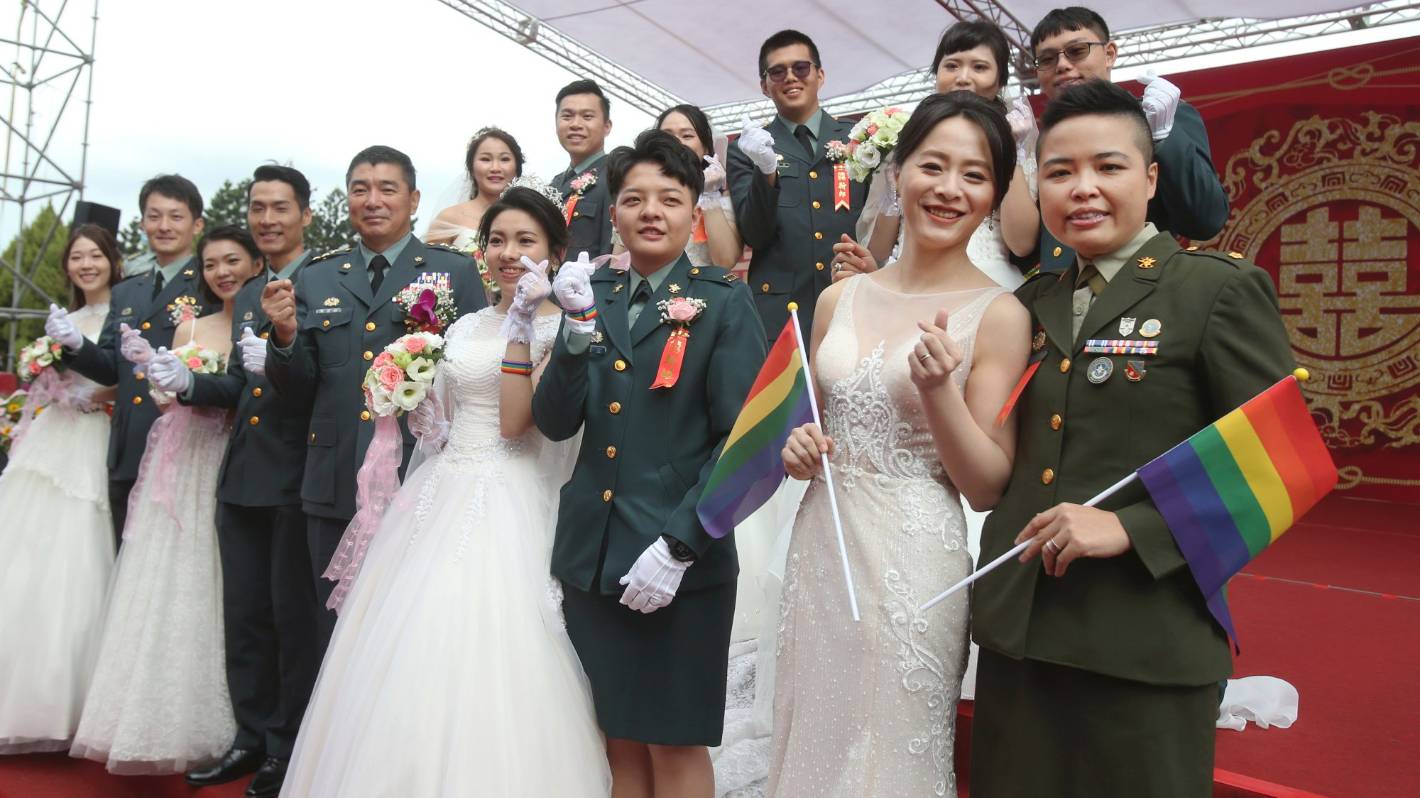 Two lesbian couples tied the knot in a mass wedding held by Taiwan’s military on Friday in a historic first celebration with their peers.

Taiwan is the only place in Asia to have legalised same-sex marriage, with more than 4,000 such couples marrying since the legislation passed in May 2019.

The mass wedding with 188 couples was the first time same-sex couples have been wed and celebrated at a military ceremony in Asia.

Both couples viewed their ceremonies with a sense of responsibility towards representing the LGBT community.

“We are hoping that more LGBT people in the military can bravely stand up, because our military is very open-minded. In matters of love, everyone will be treated equally,” said Chen Ying-hsuan, 27, an army lieutenant who married Li Li-chen, 26.

Chen wore a rainbow wristband and said she has always been open about her sexual orientation while serving.

The ceremony at an army base in the northern city of Taoyuan was brief. The couples took part in a parade and then exchanged rings in front of an audience of family members and their senior officers.

Yumi Meng, 37, and her wife, army Major Wang Yi, 36, wiped back tears as they exchanged rings. Meng wore sneakers under her wedding dress, while Wang wore her officer’s uniform. They each carried a pride flag throughout the ceremony.

Meng’s parents had not come to the celebration, but both of Wang’s parents as well as her teacher came out to support the couple.

“I really feel that this is a huge breakthrough for the military because before gay people really had to go through a lot,” said Amy Chao, mother to Wang. “Perhaps for heterosexual couples, it’s just a paper, but it’s very important for gay couples, if you’re sick or have to have a major surgery, if you don’t have this, then you are nothing, you can’t make a decision.”

Since same-sex marriage became legal in Taiwan, 4,021 such couples have married, with 69 per cent of them lesbian couples, according to the most recent government data.

The military seemed an unlikely institution to be the site of a same-sex marriage, but in recent years, has opened up, said Victoria Hsu, the Co-founder of Taiwan Alliance to Promote Civil Partnership Rights. “We hope this is a good sign to show that the armed forces’ attitude towards the LGBT community is becoming more supportive than before in Taiwan.”

That attitude was on full display Friday as it welcomed dozens of reporters to the wedding.

“Our attitude is that everyone should be treated equally, and we congratulate each and every couple, and this shows that our military’s position is open-minded, progressive and with the times,” Lt. General Yang An told reporters at the wedding.