Atlanta Hawks pledge $40 million to fight the racial opportunity gap — where should it go? 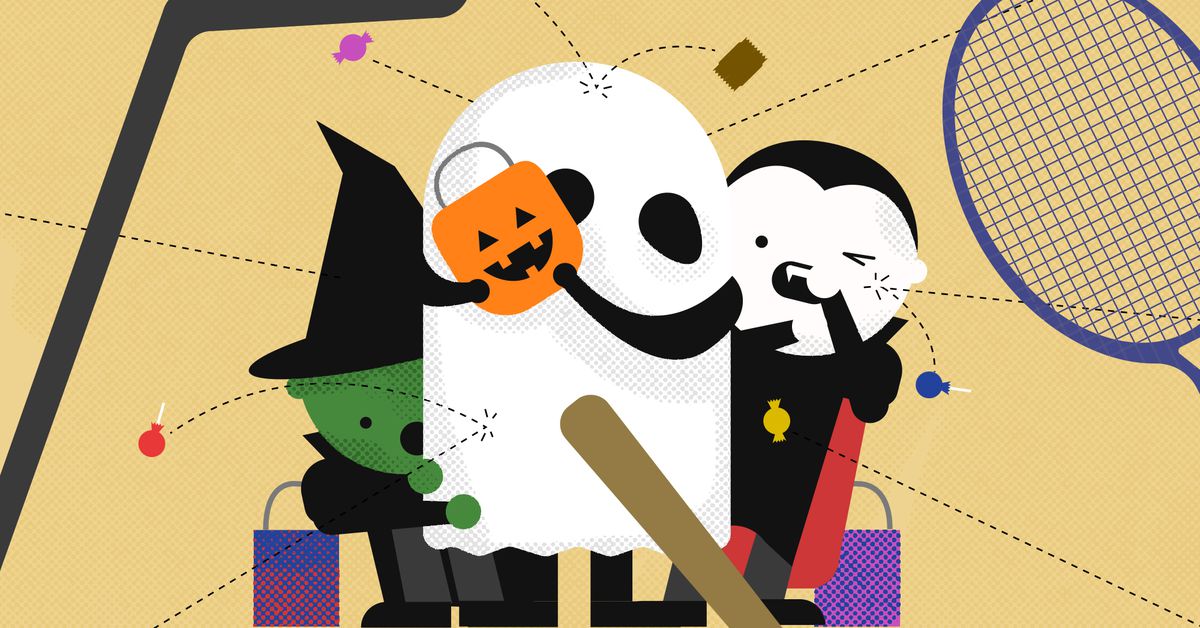 Halloween is almost upon us, and nothing will be scarier than what 2020 has doled out already. This year the simple act of trick or treating is a viral minefield, and as such people are making adjustments on how they plan to celebrate the holiday.

Canada, purveyors of Letterkenny and bagged milk provided one way to get around the problem, but it’s a little, shall we say, inelegant.

Don’t get me wrong, this is a functional and sensible way to deliver candy to children. This is the kind of ruthless efficiency we can expect from Canada. But this is America. We do things big. We do things dumb. We can do things better.

It’s here we meet the perfect union in the Venn diagram. On the left is a need for more sports, on the right is being safe during Covid, and in the gooey chocolatey center we have a solution to all our problems, likely sitting in your garage or attic.

First, a disclaimer — because I’ve been told we need such things. I have not personally tried or tested any of the methods I am about to lay out. Instead I’m using intuition and instinct to apply what I call a “Spooktactular” rating, which is basically just a fun way to re-brand potentially injuring children with your Halloween hijinx. Nobody wants to think of hurt kids during a fun holiday, so “Spooktacular” is how we’ll rebrand this. Personally, I don’t recommend trying anything above a rating of six, or so — but live your best life.

This is really more for you than the kids. The best part: It requires no equipment. Basically you shoot the candy like you’re Steph Curry, and the kids try to catch it in their pails and pillow cases.

We all need confidence boosters right now, and this one is genius. The children have a vested interest in catching the candy and not getting stuck with soiled dirt treats, and you want to feel like you’re an NBA legend. It’s a win-win. As you shoot they’ll naturally try to move into position to catch the candy, allowing you to social distance and feel like an NBA star.

You’re hitting candy with a tennis racket at kids. That’s it. That’s the general thesis here. However, the devil is in the details and there’s a ton of variance here. You can make this as gentle as you see fit — which also allows you to tailor your Halloween experience for the trick or treater.

For example, an adorable child comes to your door dressed as one of the Paw Patrol (except Chase, because that police pup is the feds). You can simply underhand lob a couple of pieces of Laffy Taffy to their mirth and delight.

Then a teenager, without a costume, who has no business participating in the holiday because they’re old enough to have a job and buy their own damn candy, comes knocking at your door. At first they think you’re generous bringing out a large bowl of full-size candy bars, then BOOM you’re Pete Sampras serving a Payday at the mooching teen. It sends a valuable lesson, and it’s fun … for you.

This one really depends on your tennis skill. If Pete Sampras is reading this then I advise Pete not actually serve a Payday at a teenager.

This requires a little setup, but I believe in you. If you’re a soccer-minded candy giver then spend the next few days creating 5-6 papier-mâché soccer balls full of candy. Think ball-sized pinatas. Then, wait for a crowd and PK them off your porch in a satisfying explosion of candy.

So why does this seemingly innocent way of candy distribution carry a high risk rating? It’s all about ball construction. There’s a big variety in how you make papier mache, and too much glue, or internal structure and you’re basically kicking a loaded soccer ball into a child’s face.

Okay, now we’re crossing into the realm of pure risk, so I don’t endorse this one. Thankfully it takes a lot of money and setup, so I’m confident you won’t do this.

Batter Up has two basic elements:

You load the giant gobstoppers into the pitching machine, and fire them into the crowd. This is an extremely bad idea, and I don’t actually know if a pitching machine can fire giant gobstoppers, but these are unnecessary details in the grand scheme of things. In fact, if this doesn’t work it’s probably for the best — because it will decrease the velocity of the gobstopper or shatter it into a million pieces.

Less chance of injury that way.

This works best if you have a tree near your porch. You fill a series of balloons with candy, fasten them to the tree and have children stand under it. Then, using a carefully placed dart throw, you pierce the balloon, causing a candy shower to rain down on the gleeful costumed kids.

The danger rating here is well earned, because most people are really bad at darts. There’s a good chance you will throw low and send a dart at a costumed kid. That’s the risk they have to assume when knocking on strangers’ houses for candy though. So we’ll allow it.

Another that requires a lot of work, but it’s worth it. Firstly you need to dress like Randy Johnson. Then you need to imagine what Randy Johnson would look like if he was trying to be Edgar Allen Poe for Halloween.

From there the rest is fairly easy. Make a flock of candy-filled papier-mâché ravens, attach them to ropes and have them swing down in front of you. Then try to destroy them with a fastball, causing a candy eruption for the little ones. They’ll love it (and probably scream), you’ll feel like an MLB Hall of Famer — it’s a win, win all around.

Ever seen people play Jai Alai? It’s simultaneously the most incredible and terrifying thing on earth. Anyway, in order to play Jai Alai you need one of these.

This is a cesta, a scoop used to hurl the pelota (ball) at ludicrous speed. In Jai Alai this means the ball can travel up to 175 mph — now we just need to transpose this over to candy.

Yes, it’s a terrifying concept. Thankfully the decision to hurl candy at frighteningly terrifying speed is really in the hands of the adult. For each group of trick or treaters you can tailor the experience, much like the idea of “Wimbledon.” If it’s a cute group of kids you can underhand throw a scoop full or Nerds. A menacing group of teens can get a nice, healthy apple — at high speed.

I don’t know where you get a cesta from, but you’ve got to admit it would be fun.

This is the best method if you’re truly worried about social distancing. It requires God-tier woodworking skills, because yes, I’m asking you to build a trebuchet in your backyard.

I don’t know how difficult this is. Probably quite — but the end result is that you own a trebuchet, and that’s pretty wonderful in its own right. Anyway, you test fire from your property and get an idea of where it will land, fine-tuning the trebuchet to land in a nearby park. Then you set up a launch schedule and post it to your neighborhood. Kids can wait in the park while you launch a literal ton of candy into the sky to rain down on them.

They have a blast living a scene out of a movie where it rains treats like Cloudy with a chance of Meatballs, while you get to be completely protected a mile away.

Everyone does the ho-hum candy delivery technique on Halloween. Sure, it’s a classic — but what if you took it to another level. Instead of giving candy, you hand out snow cones. Set up a small stand with cones and flavors, then skate around a rink you’ve set up in your front yard, getting exercise and enjoying yourself. When some kids come by you skate, hockey stop in front of them, sending a plume of shaved ice directly at them.

It’s on the kids to catch as much of the ice as possible in their cones, then they can make it their own with lots of fun flavors. It’s unexpected. It’s delightful. You’ll make memories, and that’s what Halloween is about.

But maybe … don’t do any of these.

Look, we’re coming up with some dumb ideas to cope with a very serious and soul-crushing scenario during the most difficult year in any of our lives. We’re staring down the reality that the best move is to cancel a traditional Halloween all together for the safety of the nation. Covid sucks. This year sucks. It goes without saying that this year will be burned in our memory for a long time.

My actual, honest suggestion: I have a three-year-old daughter who was crushed when I told her we wouldn’t be going around to trick or treat. She loves Halloween so much. Instead my wife and I plan to dress up in various costumes and pretend a bedroom is a house, and have her knock on the door so we can still give her candy and let her experience the holiday. 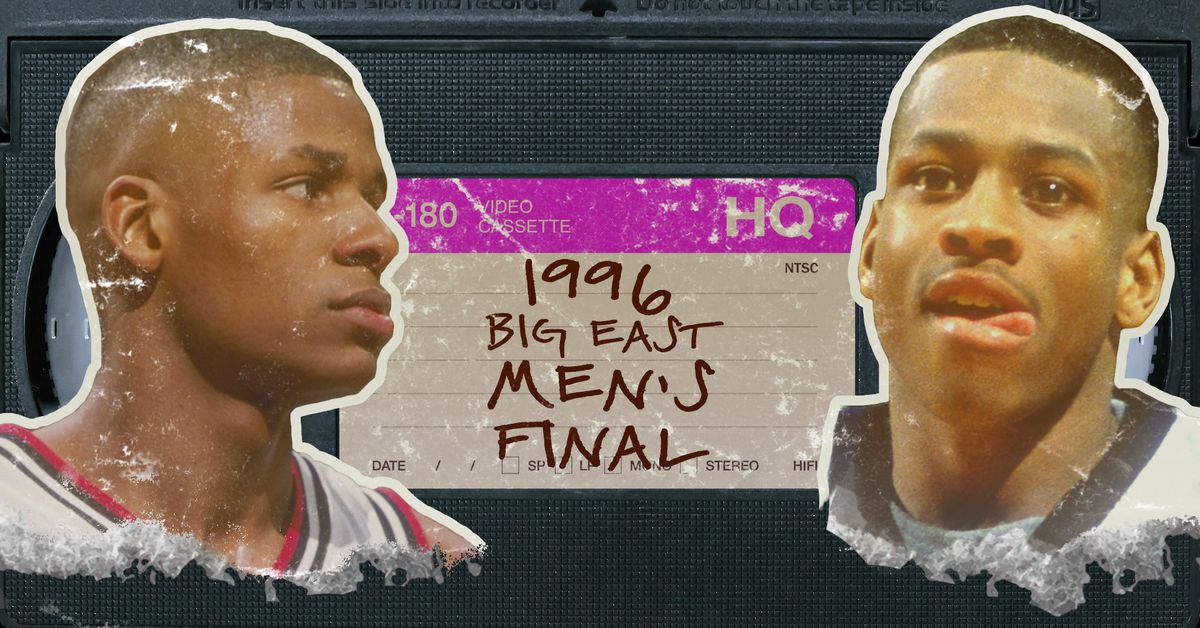 Iverson and Allen headlined the ‘96 Big East Final, and played like crap